1. Classification and Instantiation 2. Identification 3. Specialization and Generalization 4. Aggregation and Association 5. Ontologies and the Semantic Web

In this section we discuss in general terms some of the modeling concepts that we described quite specifically in our presentation of the ER and EER models in Chapter 7 and earlier in this chapter. This terminology is not only used in conceptual data modeling but also in artificial intelligence literature when discussing knowledge representation (KR). This section discusses the similarities and differences between conceptual modeling and knowledge representation, and introduces some of the alternative terminology and a few additional concepts.

The goal of KR techniques is to develop concepts for accurately modeling some domain of knowledge by creating an ontology that describes the concepts of the domain and how these concepts are interrelated. Such an ontology is used to store and manipulate knowledge for drawing inferences, making decisions, or answering questions. The goals of KR are similar to those of semantic data models, but there are some important similarities and differences between the two disciplines:

Both disciplines use an abstraction process to identify common properties and important aspects of objects in the miniworld (also known as domain of discourse in KR) while suppressing insignificant differences and unimportant details.

KR is generally broader in scope than semantic data models. Different forms of knowledge, such as rules (used in inference, deduction, and search), incomplete and default knowledge, and temporal and spatial knowledge, are represented in KR schemes. Database models are being expanded to include some of these concepts (see Chapter 26).

KR schemes include reasoning mechanisms that deduce additional facts from the facts stored in a database. Hence, whereas most current database systems are limited to answering direct queries, knowledge-based systems using KR schemes can answer queries that involve inferences over the stored data. Database technology is being extended with inference mechanisms (see Section 26.5).

Whereas most data models concentrate on the representation of database schemas, or meta-knowledge, KR schemes often mix up the schemas with the instances themselves in order to provide flexibility in representing exceptions. This often results in inefficiencies when these KR schemes are implemented, especially when compared with databases and when a large amount of data (facts) needs to be stored.

We now discuss four abstraction concepts that are used in semantic data models, such as the EER model as well as in KR schemes: (1) classification and instantiation,

(2) identification, (3) specialization and generalization, and (4) aggregation and association. The paired concepts of classification and instantiation are inverses of one another, as are generalization and specialization. The concepts of aggregation and association are also related. We discuss these abstract concepts and their relation to the concrete representations used in the EER model to clarify the data abstraction process and to improve our understanding of the related process of conceptual schema design. We close the section with a brief discussion of ontology, which is being used widely in recent knowledge representation research.

The process of classification involves systematically assigning similar objects/entities to object classes/entity types. We can now describe (in DB) or reason about (in KR) the classes rather than the individual objects. Collections of objects that share the same types of attributes, relationships, and constraints are classified into classes in order to simplify the process of discovering their properties. Instantiation is the inverse of classification and refers to the generation and specific examination of distinct objects of a class. An object instance is related to its object class by the IS-AN-INSTANCE-OF or IS-A-MEMBER-OF relationship. Although EER diagrams do not display instances, the UML diagrams allow a form of instantiation by permit-ting the display of individual objects. We did not describe this feature in our introduction to UML class diagrams.

In general, the objects of a class should have a similar type structure. However, some objects may display properties that differ in some respects from the other objects of the class; these exception objects also need to be modeled, and KR schemes allow more varied exceptions than do database models. In addition, certain properties apply to the class as a whole and not to the individual objects; KR schemes allow such class properties. UML diagrams also allow specification of class properties.

Knowledge representation models allow multiple classification schemes in which one class is an instance of another class (called a meta-class). Notice that this cannot be represented directly in the EER model, because we have only two levels—classes and instances. The only relationship among classes in the EER model is a super-class/subclass relationship, whereas in some KR schemes an additional class/instance relationship can be represented directly in a class hierarchy. An instance may itself be another class, allowing multiple-level classification schemes.

Identification is the abstraction process whereby classes and objects are made uniquely identifiable by means of some identifier. For example, a class name uniquely identifies a whole class within a schema. An additional mechanism is necessary for telling distinct object instances apart by means of object identifiers. Moreover, it is necessary to identify multiple manifestations in the database of the same real-world object. For example, we may have a tuple <‘Matthew Clarke’, ‘610618’, ‘376-9821’> in a PERSON relation and another tuple <‘301-54-0836’, ‘CS’, 3.8> in a STUDENT relation that happen to represent the same real-world entity. There is no way to identify the fact that these two database objects (tuples) represent the same real-world entity unless we make a provision at design time for appropriate cross-referencing to supply this identification. Hence, identification is needed at two levels:

To distinguish among database objects and classes

In the EER model, identification of schema constructs is based on a system of unique names for the constructs in a schema. For example, every class in an EER schema—whether it is an entity type, a subclass, a category, or a relationship type— must have a distinct name. The names of attributes of a particular class must also be distinct. Rules for unambiguously identifying attribute name references in a special-ization or generalization lattice or hierarchy are needed as well.

Aggregation is an abstraction concept for building composite objects from their component objects. There are three cases where this concept can be related to the EER model. The first case is the situation in which we aggregate attribute values of an object to form the whole object. The second case is when we represent an aggregation relationship as an ordinary relationship. The third case, which the EER model does not provide for explicitly, involves the possibility of combining objects that are related by a particular relationship instance into a higher-level aggregate object. This is sometimes useful when the higher-level aggregate object is itself to be related to another object. We call the relationship between the primitive objects and their aggregate object IS-A-PART-OF; the inverse is called IS-A-COMPONENT-OF. UML provides for all three types of aggregation.

The abstraction of association is used to associate objects from several independent classes. Hence, it is somewhat similar to the second use of aggregation. It is represented in the EER model by relationship types, and in UML by associations. This abstract relationship is called IS-ASSOCIATED-WITH.

In order to understand the different uses of aggregation better, consider the ER schema shown in Figure 8.11(a), which stores information about interviews by job applicants to various companies. The class COMPANY is an aggregation of the attributes (or component objects) Cname (company name) and Caddress (company address), whereas JOB_APPLICANT is an aggregate of Ssn, Name, Address, and Phone. The relationship attributes Contact_name and Contact_phone represent the name and phone number of the person in the company who is responsible for the inter-view. Suppose that some interviews result in job offers, whereas others do not. We would like to treat INTERVIEW as a class to associate it with JOB_OFFER. The schema shown in Figure 8.11(b) is incorrect because it requires each interview rela-tionship instance to have a job offer. The schema shown in Figure 8.11(c) is not allowed because the ER model does not allow relationships among relationships.

One way to represent this situation is to create a higher-level aggregate class com-posed of COMPANY, JOB_APPLICANT, and INTERVIEW and to relate this class to JOB_OFFER, as shown in Figure 8.11(d). Although the EER model as described in this book does not have this facility, some semantic data models do allow it and call the resulting object a composite or molecular object. Other models treat entity types and relationship types uniformly and hence permit relationships among relationships, as illustrated in Figure 8.11(c).

The main structural distinction between aggregation and association is that when an association instance is deleted, the participating objects may continue to exist. However, if we support the notion of an aggregate object—for example, a CAR that is made up of objects ENGINE, CHASSIS, and TIRES—then deleting the aggregate CAR object amounts to deleting all its component objects. 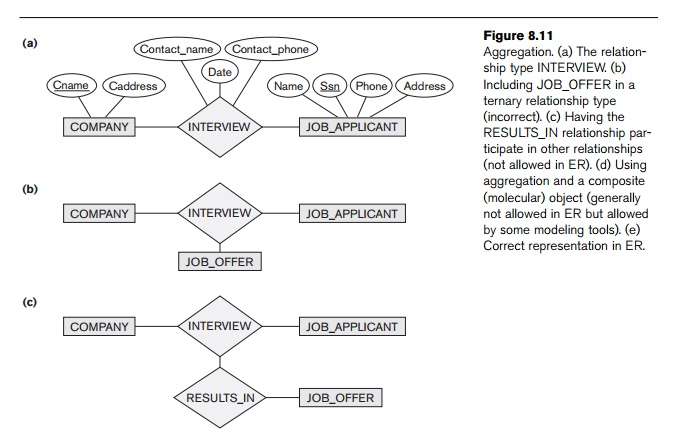 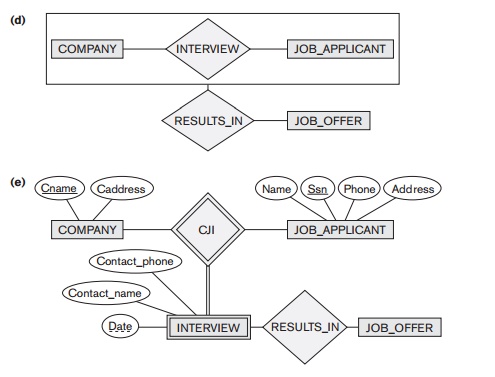 5. Ontologies and the Semantic Web

In recent years, the amount of computerized data and information available on the Web has spiraled out of control. Many different models and formats are used. In addition to the database models that we present in this book, much information is stored in the form of documents, which have considerably less structure than data-base information does. One ongoing project that is attempting to allow information exchange among computers on the Web is called the Semantic Web, which attempts to create knowledge representation models that are quite general in order to allow meaningful information exchange and search among machines. The concept of ontology is considered to be the most promising basis for achieving the goals of the Semantic Web and is closely related to knowledge representation. In this section, we give a brief introduction to what ontology is and how it can be used as a basis to automate information understanding, search, and exchange.

The study of ontologies attempts to describe the structures and relationships that are possible in reality through some common vocabulary; therefore, it can be considered as a way to describe the knowledge of a certain community about reality. Ontology originated in the fields of philosophy and metaphysics. One commonly used definition of ontology is a specification of a conceptualization.

A thesaurus (or even a dictionary or a glossary of terms) describes the rela-tionships between words (vocabulary) that represent various concepts.

A taxonomy describes how concepts of a particular area of knowledge are related using structures similar to those used in a specialization or general-ization.

A detailed database schema is considered by some to be an ontology that describes the concepts (entities and attributes) and relationships of a mini-world from reality.

A logical theory uses concepts from mathematical logic to try to define concepts and their interrelationships.

Usually the concepts used to describe ontologies are quite similar to the concepts we discussed in conceptual modeling, such as entities, attributes, relationships, specializations, and so on. The main difference between an ontology and, say, a database schema, is that the schema is usually limited to describing a small subset of a mini world from reality in order to store and manage data. An ontology is usually consid-ered to be more general in that it attempts to describe a part of reality or a domain of interest (for example, medical terms, electronic-commerce applications, sports, and so on) as completely as possible.