Take the tray of an empty match box and stretch a rubber band around it, along its length. Then, pluck the stretched rubber band with your index finger. What do you observe? Do you hear any sound? 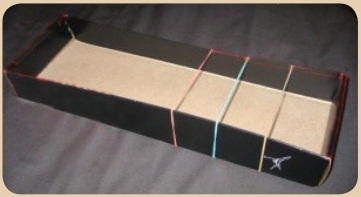 (i) On plucking the rubber band, it starts vibrating.

(ii) We can hear a feeble humming sound as long as the rubber band is vibrating.

(iii) The humming sound stops as soon as the rubber band stops vibrating.

Conclusion : This confirms that sound is produced by vibrating bodies.

Take a metal shallow pan. Hang it at a convenient place in such a way that it does not touch anything. Now, strike it with a stick. Touch the pan gently with your index finger. Do you feel the vibrations? Again, strike the pan with the stick and hold it tightly with your hands, immediately after striking. Do you still hear the sound? 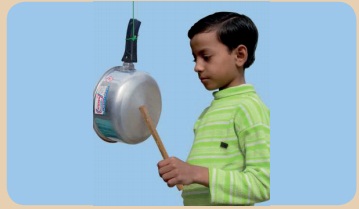 (ii) Touch the pan gently with your index finger. Do you feel the vibrations?

we can the feel the vibration for sometime.

(i) Strike the pan with the stick and hold tightly with your hands, immediately after striking.

(ii) Do you still hear the sound?

we cannot hear the sound.

This activity shows that vibrating pan produces sound. In this case vibrations can be felt by touching the pan. But in some cases vibrations are visible.

Take a metal dish, pour some water in it. Strike it at its edge with a spoon. Do you hear any sound? Again strike the dish and touch it. Can you feel the dish vibrating? Look at the surface of water. Do you see any movement on the water surface? Now, hold the dish with your hands. What change do you observe on the surface of the water?

Answer: We see that a vibrating object produces sound.

Again strike the dish and touch it. Can you feel the dish vibrating?

Answer: I can feel the dish vibrating.

Strike the dish again. Look at the surface of water. Do you see any movement on the  water surface?

Answer: I can see the waves on the surface of water.

Now, hold the dish. What change do you observe on the surface of water?

Answer: I cannot see the waves on the surface of water. 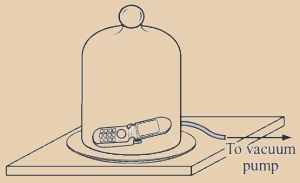 Aim : To prove that sound cannot travel through vacuum and it needs a medium for propagation.

(i) Take a bell jar and a mobile phone.

(ii) Switch on the music in the mobile phone and place it in the jar.

(iii) Now, pump out the air from the bell jar using a vacuum pump.

(iv) As more and more air is removed from the jar, the sound from the mobile phone becomes feebler and finally, very faint.

Conclusion : This experiment proves that sound cannot travel in vacuum and it needs a medium.

Observation : We observe that the sound produced by the stones undewater is feeble and not very clear.

Conclusion : This activity shows that the speed of sound depends on the properties of the medium through which it travels.

Throw a stone into a pool of still water. It produces waves, which spread rapidly over the surface of water and they travel in all directions. Do water particles move away from the point of disturbance? Check it by placing grains of saw dust over the water. They do not move away. Instead they merely move up and down about their mean position. Similarly, sound travels in the form of a wave.

Thomas Alva Edison, in 1877 invented the phonograph, a device that played the recorded sound.

Wavelength is the distance between two consecutive particles, which are in the same phase of vibration. It is denoted by the Greek letter ‘λ’. The unit of wavelength is metre (m).

Frequency is the number of vibrations of a particle in the medium, in one second. It is denoted by ‘n’. The unit of frequency is hertz (Hz).

How do astronauts communicate with each other? The astronauts have devices in their helmets which transfer the sound waves from theirvoices into radio waves and transmit it to the ground (or other astronauts in space). This is exactly the same as how radio at your home works.

The seismic wave formed during earthquake is an example for a longitudinal wave. Waves travelling through the layers of the Earth due to explosions, earthquakes and volcanic explosions are called seismic waves. Using a hydrophone and seismometer one can study these waves and record them. Seismology is the branch of science that deals with the study of seismic waves.

Amplitude is the maximum displacement of a vibrating particle from its mean position. It is denoted by ‘A’. The unit of amplitude is ‘metre’ (m).

A bat can hear the sounds of frequencies higher than 20,000 Hz. Bats produce ultrasonic sound during screaming. These ultrasonic waves help them to locate their way and the prey.