Sound is a form of energy. It is transferred through the air or any other medium, in the form of mechanical waves.

Throw a stone into a pool of still water. It produces waves, which spread rapidly over the surface of water and they travel in all directions. Do water particles move away from the point of disturbance? Check it by placing grains of saw dust over the water. They do not move away. Instead they merely move up and down about their mean position. Similarly, sound travels in the form of a wave.

Sound is a form of energy. It is transferred through the air or any other medium, in the form of mechanical waves. Mechanical wave is a disturbance, which propagates in a medium due to the repeated periodic motion of the particles of the medium, from their mean position. The disturbance which is caused by the vibrations of the particles is passed over to the next particle. It means that the energy is transferred from one particle to another as a wave motion.

A. Characteristic of wave motion

1. In wave motion, only the energy is transferred not the particles.

3. For the propagation of a mechanical wave, the medium must possess the properties of inertia, elasticity, uniform density and minimum friction among the particles.

How do astronauts communicate with each other? The astronauts have devices in their helmets which transfer the sound waves from theirvoices into radio waves and transmit it to the ground (or other astronauts in space). This is exactly the same as how radio at your home works.

B. Types of mechanical wave

There are two types of mechanical wave. They are

In a transverse wave the particles of the medium vibrate in a direction, which is perpendicular to the direction of propagation of the wave. E.g. Waves in strings, light waves, etc. Transverse waves are produced only in solids and liquids. 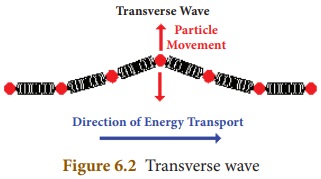 In a longitudinal wave the particles of the medium vibrate in a direction, which is parallel to the direction of propagation of the wave. E.g. Waves in springs, sound waves in a medium. Longitudinal waves are produced in solids, liquids and also in gases.

The seismic wave formed during earthquake is an example for a longitudinal wave. Waves travelling through the layers of the Earth due to explosions, earthquakes and volcanic explosions are called seismic waves. Using a hydrophone and seismometer one can study these waves and record them. Seismology is the branch of science that deals with the study of seismic waves.