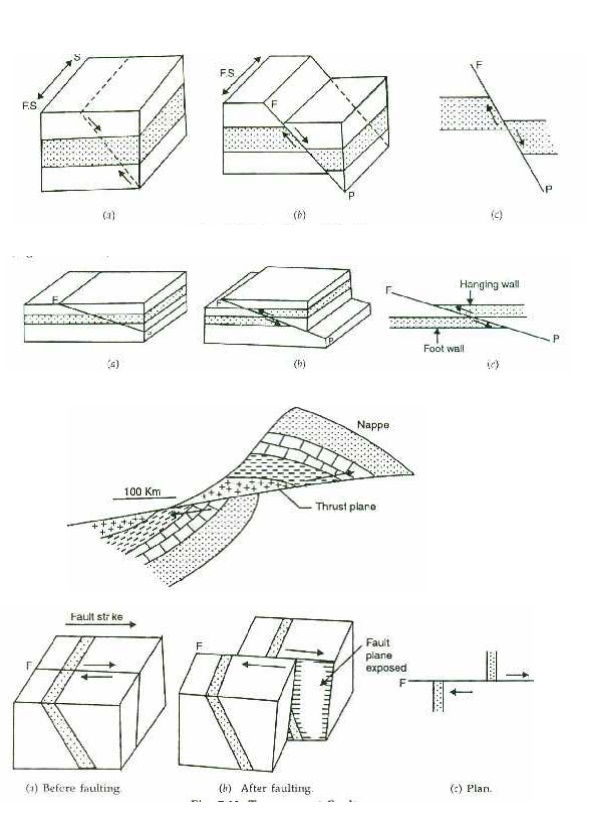 Those fractures along which there has been relative movement of the blocks past each are termed as FAULTS.

Ï    Those fractures along which there has been relative movement of the blocks past each are termed as FAULTS.

Following factors are more commonly considered important in classification of faults: The apparent movement of the disrupted blocks along the fault plane;

The direction of slip;

The relation of fault attitude with the attitude of the displaced beds; The amount of dip of the fault;

Ï     Such a fault in which hanging wall has apparently moved down with respect to footwall is classified as a Normal Fault.

Ï     when the fault satisfies the definition of hanging wall standing at a lower position with respect to the footwall it may be classed as a normal fault.

Ï     further, due to the inclined nature of the fault plane and downward displacement of a part of the strata, normal faults cause an extension in the crust wherever they occur.

Ï     It is such a type of fault in which the hanging wall appears to have moved up with respect to the footwall.

By virtue of their inclination and direction of movement, reverse faulting involves shortening of the crust of the Earth (compare with normal faults).

Ï     These are, broadly speaking, such varieties of reverse faults in which the hanging wall has moved up relative to the footwall and the faults dip at angles below 45 degrees.

Ï     The thrust faults or simply thrusts are of very common occurrence in folded mountains and seem to have originated as a further step in the process of adjustment of rocks to the imposed stresses.

Ï     Thrusts are sometimes further distinguished into two sub-types: the over thrusts and the under thrusts.

Ï     This term is used for extensive blocks of rocks that have been translated to great distances, often ranging to several hundred kilometers, along a thrust plane.

Ï     The large-scale movement maybe attributed to a major over thrusting or a recumbent folding followed by thrust faulting. 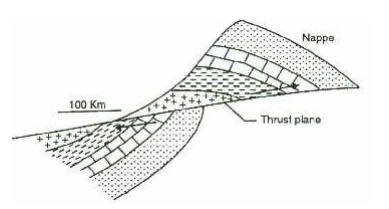 When a series of thrust faults occur in close proximity, thrust blocks are piled up one above another and all fault surfaces dip in the same direction, the resulting interesting structure is known as an imbricate Structure.

Ï     These may be defined as faults in which faulted blocks have been moved against each other in an essentially horizontal direction.

Ï     The fault plane is almost vertical and the net slip may be measured in great distances.

Ï     There are some other terms used for strike slip faults such as lateral faults, transverse faults, wrench faults and transform faults.

Ï     Of these, the transform faults are very common and denote strike slip faults specially developed in oceanic ridges.

Ï    The safety of a civil engineering structure built on or near a faulted rock can be ascertained only in a general way.

Ï    The tectonic history of the area under consideration must be known (or studied if not known) thoroughly.

Ï    Faults of any significance are always associated with earthquakes.

Ï    So, such a study would virtually mean obtaining information about frequency of the earthquakes as also their magnitude and effects that they have left from time to time on the rocks of the region.

Ï    The exact position of the area of construction with respect to the seismic zoning of the country must be thoroughly established.

Ï    Even if the evidence collected from the study of the tectonic history of the area leads to the conclusion that no movement may be expected in the rocks of the area during the projected life span of the structure raised on them, some factor of safety must be introduced into the design of the structure, especially in the big projects in faulted areas, so that if the unexpected happens, there is minimum loss to the project.

Ï    In all big countries, maps of seismic classification are available.

Ï     In most cases recommendations of the statutory authorities are available about introducing suitable factor of safety in major civil engineering projects of any public importance that are proposed to be constructed in areas of known seismic zones.