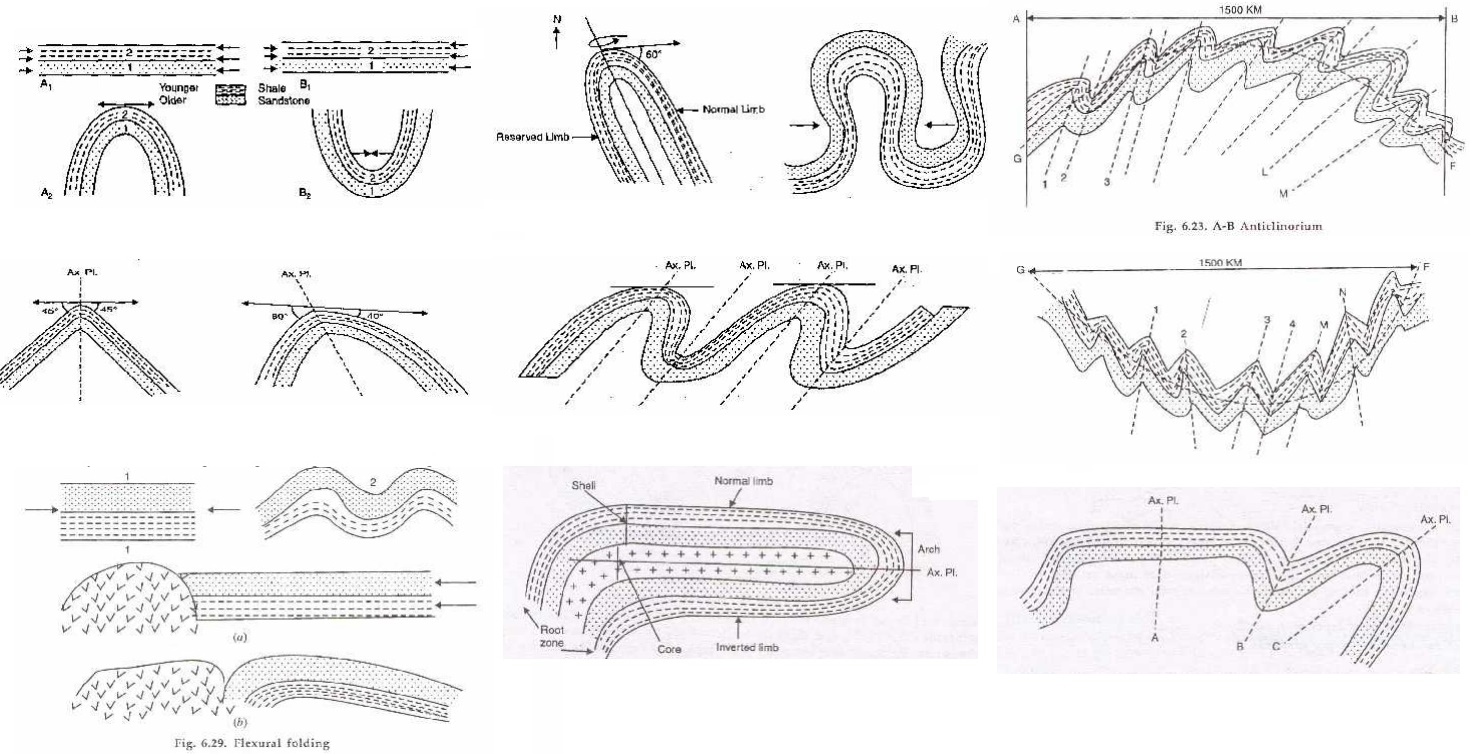 Anticlines are defined as tho se folds in which

the strata are uparch ed, that is, these become CONVEX UPWARDS ;

the geologically olde r rocks occupy a position in the interior of the fold, oldest being positioned at th e core of the fold and the youngest forming the outermost flank,

the limbs dip away from each other at the crest in the simplest cases.

the strata are downar ched, that is, these become CONVEX DOWNWARDS;

the geologically younger rocks occupy a position in the core of th e fold and the older rocks form the outer flanks, provided the normal order of superposition is not d isturbed,

in the simplest cases in synclines, the limbs dip towards a common c enter.

Ï     These are also called normal or upright folds. In such a fold, the axia l plane is essentially vertical.

Ï     The limbs are equal i n length and dip equally in opposite directions.

it may be an anticline or syncline and when classified, may be described as symmetrical anticline / syncline as the case may be.

All those folds, anticlines or synclines, in which the limbs are unequ al in length and these dip uneq ually on ether side from the hinge line are termed as asymmetrical folds.

Ï    These are folds with inclined axial planes in which both the limbs are dipping essentially in the same general direction.

Ï    One of the two limbs (the reversed limb) comes to occupy the present position after having suffered a rotation through more than 90 degrees.

The other limb is known as the normal limb.

Ï In certain cases, both the limbs of a fold may get overturned because of very high lateral compression.

Ï     It may be originally either an anticline or a syncline but the extreme compression from opposite sides results in bringing the limbs so close to each other that the usual dip conditions may get reversed -anticlinal limbs dip towards each other and the synclinal limbs dip away from each other.

Ï    In such folds, the anticlinal tops are said to have opened up into a broad, fan-shaped outline due to intense compression in the lower region.

Ï    These are group of folds in which all the axial planes are essentially parallel, meaning. that all the component limbs are dipping at equal amounts.

Ï     These may be described as extreme types of overturned folds in which the axial plane acquires an almost horizontal attitude.

Ï    In such folds, one limb comes to lie exactly under the other limb so that a drill hole dug at the surface in the upper limb passes through the lower limb also.

Ï     The lower limb is often called the inverted limb or the reversed limb.

Ï     Other parts of a recumbent fold are sometimes named as follows:

the arch, which is zone of curvature corresponding to crest and trough in the upright folds;

the shell, which is the outer zone made up mostly of sedimentary formations;

the core, which is the innermost part of the fold and maybe made mostly of crystalline igneous or metamorphic rocks;

the root or the root zone, which is the basal part of the fold and may or may not be easily traceable; once traced it can throw light whether the fold was originally an anticline or syncline that has suffered further inversion.

In certain cases a pair of folds that are apparently related to each other may have mutually inclined axial planes.

Such folds are described as conjugate folds.

The individual folds themselves may be anticlinal or synchnal or their modifications.

It may be described as a special type of fold with exceptionally flattened top and steeply inclined limbs almost forming three sides of a rectangle. 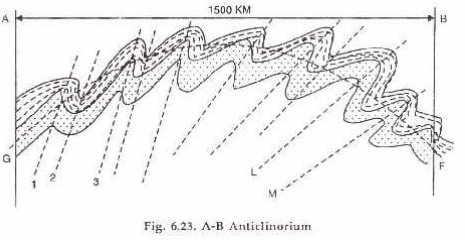 Ï     In both the anticlinorium and synclinorium, presence of large number of secondary folds, faults and fracture systems is a characteristic feature.

Ï     Similar folding but signifying still larger bending and uplifting of strata on sub-continental scales is expressed by the terms GEANTICLINES AND GEOSYNCLINES respectively.

Ï     Great importance is attached to the major depressions, the geosynclines, in the process of mountain building discussed elsewhere.

Ï    The geosynclines are believed to serve as depositional fields or basins of sedimentation to which sediments derived by the erosion of the adjoining gentilities get accumulated and compacted.

Ï     This material is then compressed and uplifted in the second stage of orogeny, to gradually take the shape of mountain systems.