The availability of reliable methods of sterilization has made possible the major develop-ments in surgery and intrusive medical techniques that have helped to revolutionize medi-cine over the past century.

The availability of reliable methods of sterilization has made possible the major develop-ments in surgery and intrusive medical techniques that have helped to revolutionize medi-cine over the past century. Furthermore, sterilization procedures form the basis of many food preservation procedures, particularly in the canning industry. The various modes of sterilization described in the text are summarized in Table 11 – 1. 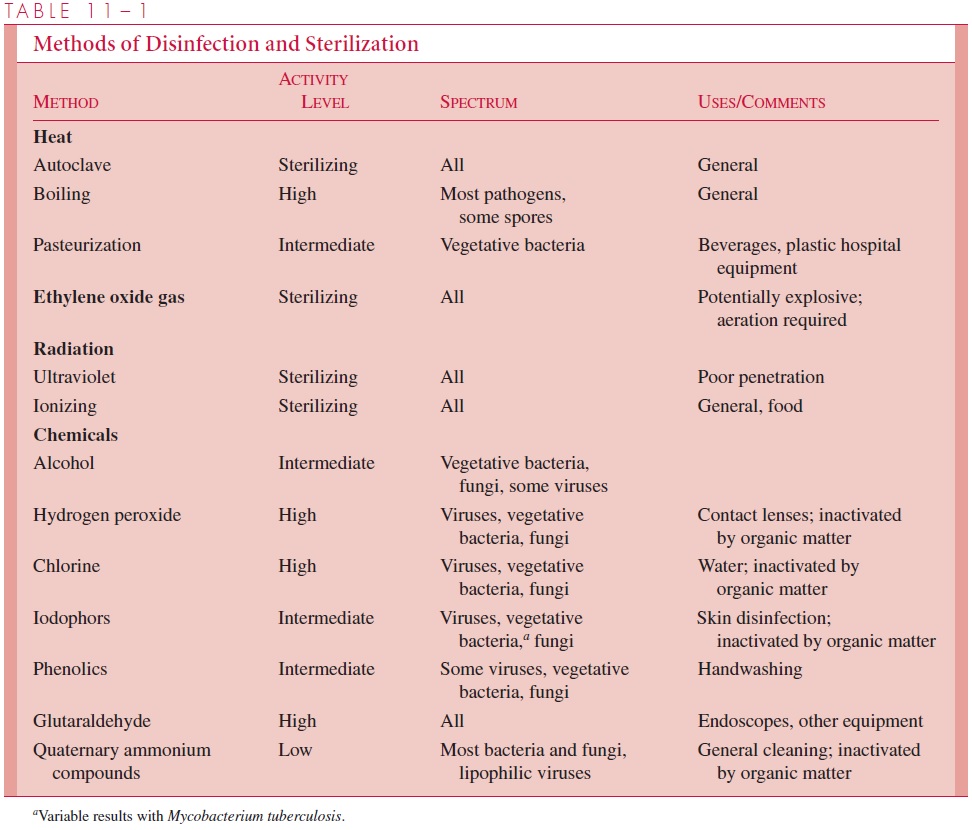 The simplest method of sterilization is to expose the surface to be sterilized to a naked flame, as is done with the wire loop used in microbiology laboratories. It can be used equally effectively for emergency sterilization of a knife blade or a needle. Of course, dis-posable material is rapidly and effectively decontaminated by incineration. Carbonization of organic material and destruction of microorganisms, including spores, occur after ex-posure to dry heat of 160°C for 2 hours in a sterilizing oven. This method is applicable to metals, glassware, and some heat-resistant oils and waxes that are immiscible in water and cannot, therefore, be sterilized in the autoclave. A major use of the dry heat steriliz-ing oven is in preparation of laboratory glassware.

Moist heat in the form of water or steam is far more rapid and effective in sterilization than dry heat, because reactive water molecules denature protein irreversibly by disrupting hydrogen bonds between peptide groups at relatively low temperatures. Most vegetative bacteria of importance in human disease are killed within a few minutes at 70°C or less, al-though many bacterial spores  can resist boiling for prolonged periods. For applications requiring sterility the use of boiling water has been replaced by the autoclave, which when properly used ensures sterility by killing all forms of microorganisms.

In effect, the autoclave is a sophisticated pressure cooker (Fig 11 – 2). In its sim-plest form, it consists of a chamber in which the air can be replaced with pure saturated steam under pressure. Air is removed either by evacuation of the chamber before filling it with steam or by displacement through a valve at the bottom of the autoclave, which remains open until all air has drained out. The latter, which is termed a downward dis-placement autoclave, capitalizes on the heaviness of air compared with saturatedsteam. When the air has been removed, the temperature in the chamber is proportional to the pressure of the steam; autoclaves are usually operated at 121°C, which is achieved with a pressure of 15 pounds per square inch. Under these conditions, spores directly exposed are killed in less than 5 minutes, although the normal sterilization time is 10 to 15 minutes to account for variation in the ability of steam to penetrate different materials and to allow a wide margin of safety. The velocity of killing increases loga-rithmically with arithmetic increases in temperature, so a steam temperature of 121°C is vastly more effective than 100°C. For example, the spores of Clostridium botulinum, the cause of botulism, may survive 5 hours of boiling, but can be killed in 4 minutes at 121°C in the autoclave. 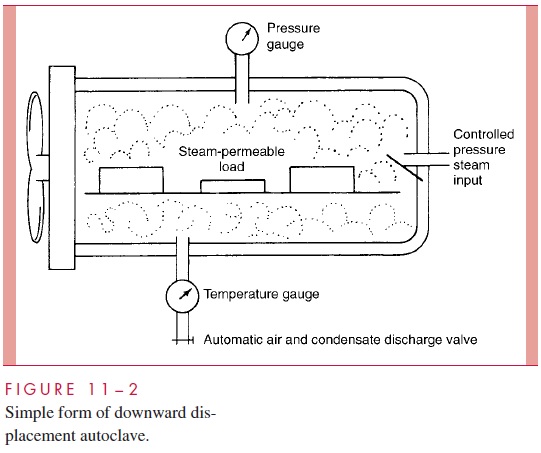 The use of saturated steam in the autoclave has other advantages. Latent heat equiva-lent to 539 cal/g condensed steam is immediately liberated on condensation on the cooler surfaces of the load to be sterilized. The temperature of the load is thus raised very rapidly to that of the steam. Condensation also permits rapid steam penetration of porous materials such as surgical drapes by producing a relative negative pressure at the surface, which al-lows more steam to enter immediately. Autoclaves can thus be used for sterilizing any materials that are not damaged by heat and moisture, such as heat-stable liquids, swabs, most instruments, culture media, and rubber gloves.

It is essential that those who use autoclaves understand the principles involved. Their effectiveness depends on absence of air, pure saturated steam, and access of steam to the material to be sterilized. Pressure per se plays no role in sterilization other than to ensure the increased temperature of the steam. Failure can result from attempt-ing to sterilize the interior of materials that are impermeable to steam or the contents of sealed containers. Under these conditions, a dry heat temperature of 121°C is obtained, which may be insufficient to kill even vegetative organisms. Large volumes of liquids require longer sterilization times than normal loads, because their temperature must reach 121°C before timing begins. When sealed containers of liquids are sterilized, it is essential that the autoclave cool without being opened or evacuated; otherwise, the con-tainers may explode as the external pressure falls in relation to that within.

“Flash” autoclaves, which are widely used in operating rooms, often use saturatedsteam at a temperature of 134°C for 3 minutes. Air and steam are removed mechanically before and after the sterilization cycle so that metal instruments may be available rapidly. Quality control of autoclaves depends primarily on ensuring that the appropriate tempera-ture for the pressure used is achieved and that packing and timing are correct. Biological and chemical indicators of the correct conditions are available and are inserted from time to time in the loads.

A number of articles, particularly certain plastics and lensed instruments that are damaged or destroyed by autoclaving, can be sterilized with gases. Ethylene oxide is an inflamma-ble and potentially explosive gas. It is an alkylating agent that inactivates microorganisms by replacing labile hydrogen atoms on hydroxyl, carboxy, or sulfhydryl groups, particu-larly of guanine and adenine in DNA. Ethylene oxide sterilizers resemble autoclaves and expose the load to 10% ethylene oxide in carbon dioxide at 50 to 60°C under controlled conditions of humidity. Exposure times are usually about 4 to 6 hours and must be fol-lowed by a prolonged period of aeration to allow the gas to diffuse out of substances that have absorbed it. Aeration is essential, because absorbed gas can cause damage to tissues or skin. Ethylene oxide is a mutagen, and special precautions are now taken to ensure that it is properly vented outside of working spaces. Used under properly controlled conditions, ethylene oxide is an effective sterilizing agent for heat-labile devices such as artificial heart valves that cannot be treated at the temperature of the autoclave. Other alkylating such as formaldehyde vapor can be used without pressure to decontaminate larger areas such asrooms, and oxidizing agents (hydrogen peroxide, ozone) have selective use.

Ultraviolet (UV) light in the wavelength range 240 to 280 nm is absorbed by nucleicacids and causes genetic damage, including the formation of the thymine dimers dis-cussed previously. The practical value of UV sterilization is limited by its poor ability to penetrate. Apart from the experimental use of UV light as a mutagen, its main application has been in irradiation of air in the vicinity of critical hospital sites and as an aid in the decontamination of laboratory facilities used for handling particularly hazardous organ-isms. In these situations, single exposed organisms are rapidly inactivated. It must be re-membered that UV light can cause skin and eye damage, and workers exposed to it must be appropriately protected.

Ionizing radiation carries far greater energy than UV light. It, too, causes directdamage to DNA and produces toxic free radicals and hydrogen peroxide from water within the microbial cells. Cathode rays and gamma rays from cobalt-60 are widely used in industrial processes, including the sterilization of many disposable surgical supplies such as gloves, plastic syringes, specimen containers, some foodstuffs, and the like, be-cause they can be packaged before exposure to the penetrating radiation. Ionizing irradi-ation does not always result in the physical disintegration of killed microbes. As a result, plasticware sterilized in this way may carry significant numbers of dead but stainable bacteria. This has occasionally caused confusion when it has involved containers used to collect normally sterile body fluids such as cerebrospinal fluid. The dead bacterial bodies may produce a “false-positive” Gram-stained smear and result in inappropriate adminis- tration of antibiotics. Recent foodborne outbreaks (Escherichia coli) and bioterrorism (anthrax) have increased the use of ionizing radiation.