Surgical sterilization techniques for women can be per-formed by laparoscopy, hysteroscopy, minilaparotomy, or transvaginally. Sterilization can be performed as an intervalprocedure, after a spontaneous or elective abortion, or as a postpartum procedure at the time of caesarean delivery or following vaginal delivery.

Some nonsurgical methods based on prin-ciples of immunization as well as sclerosing agents are under investigation, but remain experimental although promising. Regardless of the method chosen, patients should be counseled about the various components of the procedure, effectiveness rates, and possible complications. Failure rates of tubal sterilization are roughly comparable with those of the intrauterine contraceptive (IUC). Pregnancy should also be ruled out prior to performing any steriliza-tion procedure.

Performed as an outpatient interval procedure, laparo-scopic techniques may be carried out under local, regional, or general anesthesia. Small incisions, a relatively low rate of complica-tions, and a degree of flexibility in the procedures have led to high physician and patient acceptability.

Occlusion of the fallopian tubes may be accom-plished through the use of electrocautery (unipolar or bipolar) or the application of a plastic and spring clip (Filshie clip) or silastic band (Yoon or Falope ring).

The choice among laparoscopic methods and cautery or occlusive de-vice is often based more on operator experience, training, and personal preference than on outcome data.

Electrocautery-based methods are fast, but theycarry a risk of inadvertent electrical damage to other struc-tures, poorer reversibility, and greater incidence of ectopic pregnancies when failure does occur. Most operators co-agulate at the isthmus, taking care that the coagulation forceps is placed over the entire fallopian tube and onto the mesosalpinx so that the entire tube and its lumen are coagulated >3 cm in length. Bipolar cautery is safer than unipolar; it has less risk of spark injury to adjacent tissue, because the current passes directly between the blades of the coagulation forceps (Fig. 25.2). Unipolar cautery, how-ever, has a lower failure rate than bipolar. The surgeon,therefore, needs to carefully weigh the risk of the individ-ual procedure with its respective effectiveness. 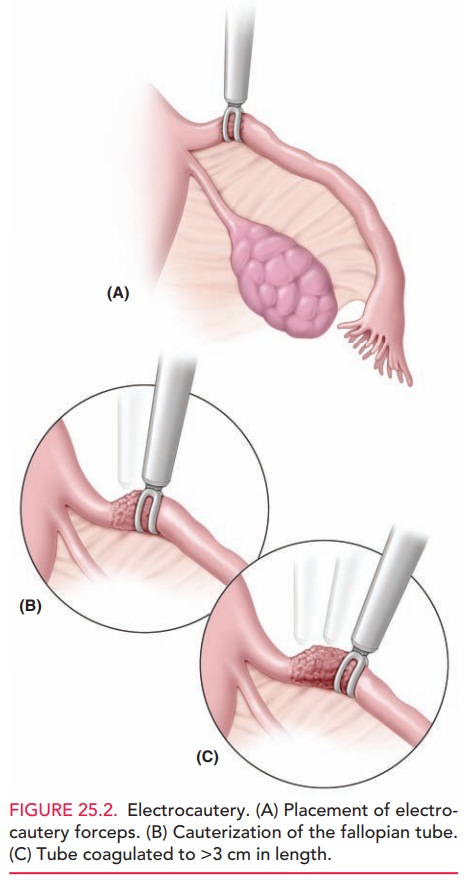 The Hulka clip is the most readily reversible method because of its minimal tissue damage, but it also carries the greatest failure rate (>1%) for the same reason. As in co-agulation, care must be taken to place the jaws of the Hulka clip over the entire breadth of the fallopian tube at 90-degree angle. This can be especially difficult when performed immediately postpartum, due to the natural edematous dilation of the tubes.

The Falope ring is intermediate for both reversibility and failure rates. Patients may, however, have a higher in-cidence of postoperative pain, requiring strong analgesics. Care must be taken to draw a sufficient “knuckle” of fallo-pian tube into the Falope ring applicator so that the band is placed below the outer and inner borders of the fallopian tube, thus occluding the lumen completely (Fig. 25.3A). Bleeding is a potential complication if too much pressure is placed on the mesosalpinx during the application of the ring. 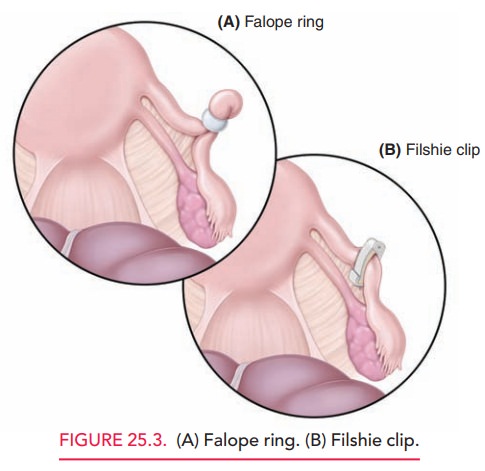 The Filshie clip has a lower failure rate than the Hulka clip, because of its larger diameter, ease of applica-tion, and atraumatic locking device (Fig. 25.3B). To maximize effectiveness, this clip should be placed at the isth-mic portion of the fallopian tube.

Minilaparotomy is the most common surgical approach for tubal ligation throughout the world. Minilaparotomy can be ac-complished with a small infraumbilical incision made in the postpartum period or a small lower abdominal supra-pubic incision used as an interval procedure, both of which provide ready access to the uterine tubes. Occlusion of the fallopian tubes may then be accomplished by excision of all or part of the fallopian tube or the use of clips, rings, or cautery.

A common method of tubal interruption done in minila-parotomy is the Pomeroy tubal ligation (Fig. 25.4). 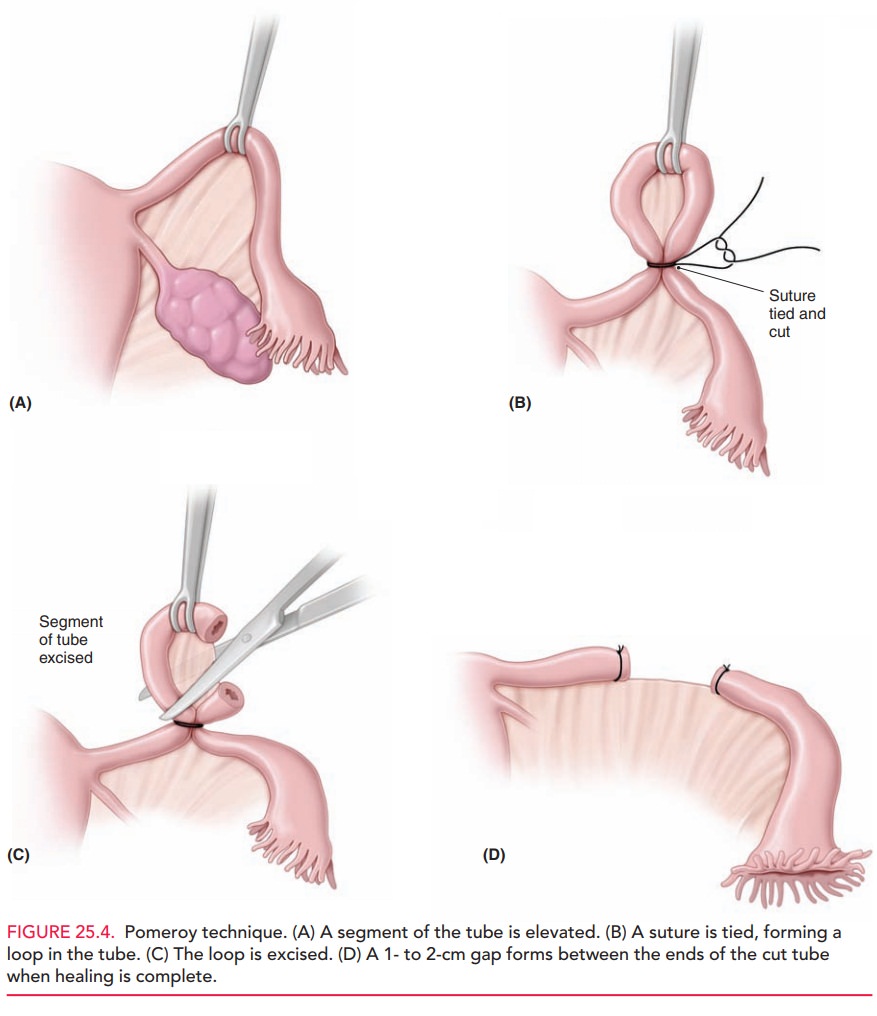 In this procedure, a segment of tube from the midportion is elevated, and an absorbable ligature is placed across the base, form-ing a loop, or knuckle, of tube. This knuckle is then ex-cised. Because of the similarity in appearance between the fallopian tube and the round ligament, this tissue is sent for histologic confirmation. When healing is complete, the ends of the tube will have sealed closed, with a 1- to 2-cm gap between the ends. Electrocoagulation or the ap-plication of clips or bands may also be accomplished through a minilaparotomy incision, although these are more widely used with laparoscopy.

The thin wall of tissue between the vaginal canal and the posterior cul-de-sac also offers a convenient port of entry into the peritoneal cavity for sterilization procedures. Advantages include less patient preparation (e.g., bladder catheter-ization), the absence of abdominal incision, and potentially less pain for the patient, with an earlier return to routine activity. Contraindications include suspicion of major pelvic adhe-sions, enlarged uterus, and inability to place the patient in the lithotomy position. One major disadvantage is the need for adequate vaginal surgical training to minimize potential complications, such as cellulitis, pelvic abscess, hemor-rhage, proctotomy, or cystotomy.

Transcervical approaches to sterilization include hysteroscopy and involve gaining access to the fallopian tubes through the cervix. The only currently available hysteroscopic steriliza-tion method involves the placement of a titanium-Dacronspring device directly into the tubal ostia bilaterally.

Theinserts stimulate a tissue reaction that ultimately leads to tubal occlusion. Patients are instructed to use an additional form of contraception for 3 months after the procedure, until the efficacy of the device can be proven with hys-terosalpingography. Contraindications include nickelor contrast allergies, active pelvic infection, and sus-pected pregnancy. Patients should be pretreated with eitherdepomedroxyprogesterone (DMPA) or continuous combined oral contraceptive pills, which ensures a thin endometrial lining, enhances visualization, and improves the success rate of the pro-cedure. This procedure can be used for obese patients whomay otherwise not be suitable candidates for laparoscopic tubal ligation due to their body habitus. The efficacy for this procedure has been reported to be as great as 99.8%.

Side Effects and Complications

No surgically-based technology is free of the possibility of complications or side effects. Infection, bleeding, injury to surrounding structures, or anesthetic complications may occur with any of the techniques discussed. The overall fatality rate attributed to sterilization is about 1–4 per 100,000 procedures, significantly lower than that for childbearing in the United States, estimated at about 10 per 100,000 births.

Although pregnancy after sterilization is uncommon, there is substantial risk that any post-sterilization pregnancies will be ectopic. The risk varies with the type of procedure and the age of the patient. Ectopic pregnancy occurs after tubal lig-ation more commonly after cautery than after mechanical tubal occlusion, probably because of microscopic fistulae in the coagulated segment connecting to the peritoneal cavity. Overall, the 10-year cumulative probability of ectopic preg-nancy after tubal ligation is 7.3 per 1000 procedures.

Patients who undergo a tubal ligation not only gain effec-tive contraception; they also benefit from a decreased life-time risk of ovarian cancer. The mechanism for this risk reduction is unknown at this time. Although tubal steril-ization has not been shown to protect against sexually transmitted diseases (STDs), it may offer some protection against pelvic inflammatory disease. 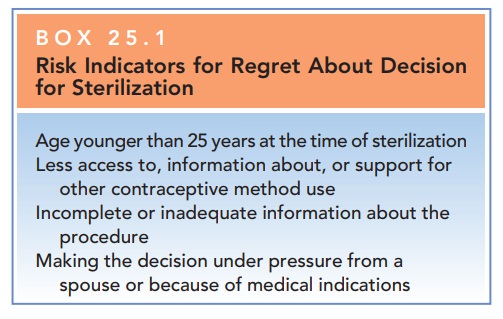