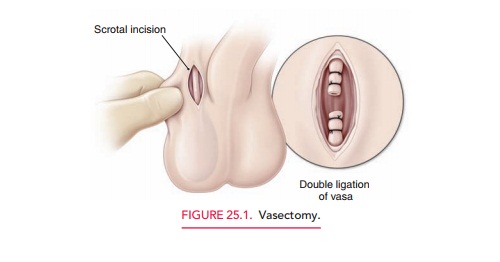 About one-third of all surgical sterilization procedures are performed on men.

About one-third of all surgical sterilization procedures are performed on men. The technique for vasectomy varies and includes excision and ligation, electrocautery, and me-chanical or chemical occlusion of the vas deferens. Because vasectomy is performed outside the abdominal cavity, the procedure is safer, more easily performed in most cases, less expensive, and generally more effective than procedures done on women. Vasectomy is also more easily reversed than most female sterilization procedures (Fig. 25.1). The main benefit of tubal ligation over vasectomy is immediate sterility.

Minor postoperative complications occur in 5% to 10% of cases, and include bleeding, hematomas, acute and chronic pain, and local skin infections. Some authors report a greater inci-dence of depression and change in body image after vasec-tomy than after female sterilization. This risk may be minimized with preoperative counseling and education. Concern has been raised about the formation of sperm antibodies in approximately 50% of patients, but no ad-verse long-term effects of vasectomy have been identified. Likewise, concerns about an increased risk of prostate can-cer following vasectomy are not supported in literature; in-deed, in countries with the highest rates of vasectomy, there is no increase in the incidence of prostate cancer. 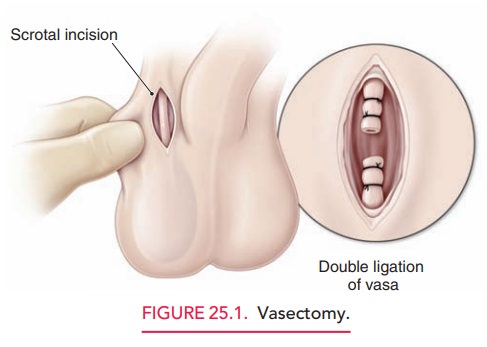 Pregnancy after vasectomy occurs in about 1% of cases. Manyof these pregnancies result from intercourse too soon after the procedure, rather than from recanalization. Vasectomy is not immediately effective. Multiple ejaculations are re-quired before the proximal collecting system is emptied of sperm. Couples should use another method of contracep-tion until male sterility is reasonably assured or postoper-ative azoospermia is confirmed by semen analysis (50% at 8 weeks, 100% at 10 weeks postprocedure).