Heat is the most rapid and best method of sterilization.

Heat is the most rapid and best method of sterilization. It is the method of choice that the material to be sterilized is stable enough to withstand the required temperature necessary to kill the microbes. The time needed for sterilization depends on the initial number of organisms present, type of materials to be sterilized (hence washed and cleaned items are easier to sterilize than dirty ones) and also on the temperature used. Spores need higher temperatures while vegetative bacteria can be destroyed at lower temperatures. 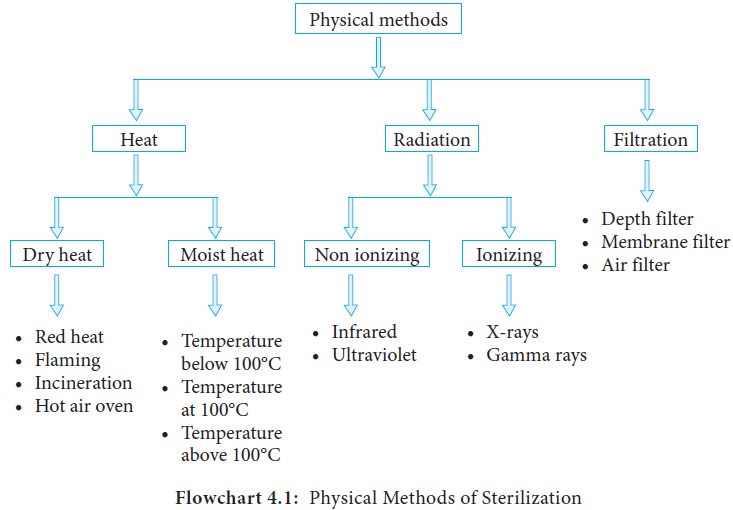 Heat resistance varies among different microorganisms. These differences can be expressed in terms of thermal death point. Thermal Death Point (TDP) is the lowest temperature at which all the microorganisms in a particular liquid suspension will be killed in 10 minutes.

Another factor to be considered in sterilization is the duration of time required. This is expressed as Thermal Death Time (TDT). TDT is the minimal time required for all microorganism in a particular liquid culture to be killed at a given temperature. Both TDP and TDT are useful guidelines that indicate the degree of treatment required to kill a given population of bacteria.

Decimal Reduction Time (DRT) is related to bacterial heat resistance. DRT is the time, in minutes, in which 90% of a population of microorganism at a given temperature will be killed.

Heat is employed either as dry heat or moist heat.

Dry heat is frequently used for the sterilization of glassware and laboratory equipments. In dry heat sterilization, microbial cells are apparently killed by oxidation of their constituents and protein denaturation. Dry heat is applied in the following ways:

Inoculating wires, points of forceps and searing spatulas are sterilized by holding them in the flame of a bunsen burner until they are seen to be red hot.

This method is used for sterilizing scalpels, needles, mouths of culture tubes, slides and cover slips. It involves passing the article through the bunsen flame without allowing it to become red hot.

This is an excellent method for destroying materials such as contaminated clothes, cotton wool stoppers, animal carcasses and pathological materials. It involves burning of materials in incinerators.

This is the most widely used method of sterilization using dry heat. The oven is usually heated by electricity and it has a thermostat that maintains the chamber air constantly at the chosen temperature.

It has a fan or turbo-blower to assist the circulation of air and to ensure rapid, uniform heating of the load. In Hot Air Oven, the air is heated at a temperature of 160oC for one hour. Figure 4.1 shows laboratory hot air oven. 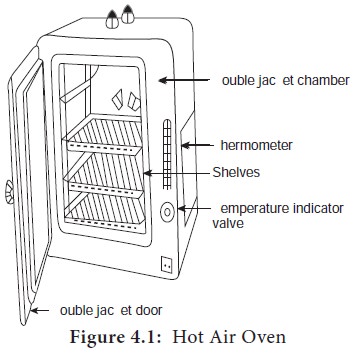 This is the best method of sterilizing dry glass ware such as test tubes, petri dishes, flasks, pipettes and instruments such as forceps, scalpels and scissors. It is also used to sterilize some pharmaceutical products such as liquid paraffin, dusting powder, fats and grease.

The spores of a nontoxigenic strain of Clostridium tetani are used to test the efficiency of dry heat sterlization.

Moist heat kills microorganisms primarily by the coagulation of proteins (denaturation), which is caused by breakage of the hydrogen bonds that hold the proteins in three dimensional structure.

There are three methods employed in moist heat sterilization.

a. Temperature below 100°C: Pasteurization

The process of heating a liquid food or beverage either at 62.8°C for 30 minutes or 72°C for 15 seconds to enhance their shelf life and destroy harmful microorganisms. It should be noted that pasteurization process kills only vegetative cells but not the spores. Pasteurization named in honour of its developer Louis Pasteur. Table 4.1 gives comparison between Sterilization and Pasteurization.

Pasteurization can be done in the following methods,

In this method milk, beer and fruit juices are maintained at 62.8°C for 30 minutes.

Milk can be treated at 141°C for 2 seconds (This method employ temperature above 100°C).

Boiling is one of the moist heat sterilization methods. It kills vegetative forms of bacterial pathogens, almost all viruses and fungi (including their spores) within 10 minutes, usually much faster.

·        Most vegetative bacteria will die in 5-10 minutes when immersed in boiling water, but some spores will survive at this temperature for several hours.

·        Articles sterilized by this method cannot be stored for a long time.

It is a process discovered by John Tyndall in 19th century for sterilizing substances to kill the spores of bacteria. The process of exposure of materials to steam at 100°C for 20 min for three consecutive days is known as tyndallization. First exposure kills all the vegetative forms and in the intervals between heating, the remaining spores germinate into vegetative forms which are killed on subsequent heating. Tyndallization is also called fractional sterilization or intermittent boiling.

Moist heat sterilization can be carried out at temperature above 100°C in order to destroy bacterial endospores. This requires the use of saturated steam under pressure. This is achieved using autoclave.

Sterilization using an autoclave is most effective when the organisms are either contacted by the steam directly or contained in a small volume of aqueous liquid (primarily water). The temperature used in autoclave is 121°C at 15 lbs (pounds) pressure for 15 minutes (Figure 4. 2a & b). 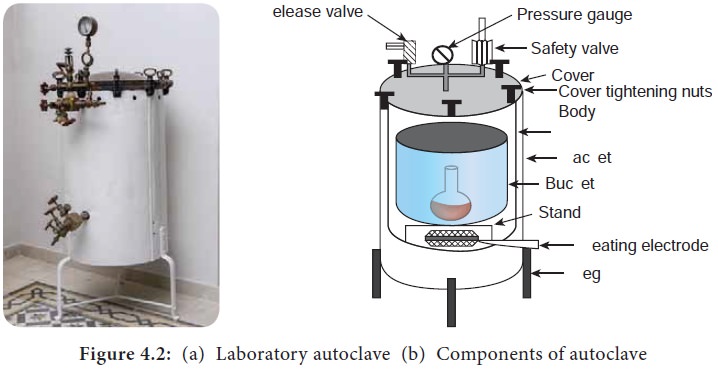 Sterilization by heat depends upon various factors such as time, temperature employed, number of microorganisms, spores and nature of material to be sterilized.

To check the efficiency of moist heat sterlization, the indicator commonly used is the paper strips containing spores of Bacillussterothermophilus.