Home | | Measurements and Instrumentation | Static& Dynamic Performance Characteristics of an Instrument
Posted On :  30.04.2017 08:36 am

The performance characteristics of an instrument are mainly divided into two categories:

The set of criteria defined for the instruments, which are used to measure the quantities which are slowly varying with time or mostly constant, i.e., do not vary with time, is called ‘static characteristics’.

It is the degree of closeness with which the reading approaches the true value of the quantity to be measured. The accuracy can be expressed in following ways:

Such an accuracy is specified at only one particular point of scale. It does not give any information about the accuracy at any other point on the scale.

b)  Accuracy as percentage of scale span:

When an instrument as uniform scale, its accuracy may be expressed in terms of scale range.

The best way to conceive the idea of accuracy is to specify it in terms of the true value of the quantity being measured.

It is the measure of reproducibility i.e., given a fixed value of a quantity, precision is a measure of the degree of agreement within a group of measurements. The precision is composed of two characteristics:

Consider a resistor having true value as 2385692 , which is being measured by an ohmmeter. But the reader can read consistently, a value as 2.4 M   due to the non availability of proper scale. The error created due to the limitation of the scale reading is a precision error.

b)  Number of significant figures:

The precision can be mathematically expressed as: P=1

The sensitivity denotes the smallest change in the measured variable to which the instrument responds. It is defined as the ratio of the changes in the output of an instrument to a change in the value of the quantity to be measured. Mathematically it is expressed as, 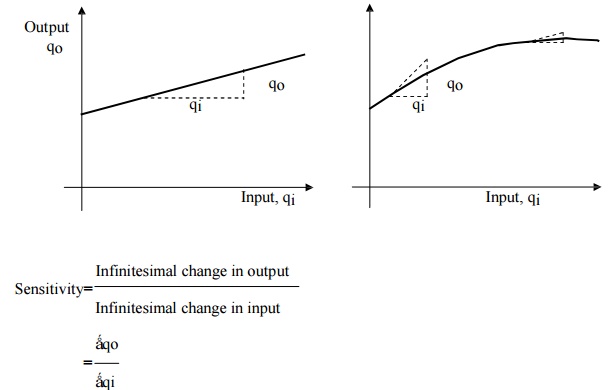 If the calibration curve is not linear as shown, then the sensitivity varies with the input.

Inverse sensitivity or deflection factor is defined as the reciprocal of sensitivity.

The linearity is defined as the ability to reproduce the input characteristics symmetrically & linearly. 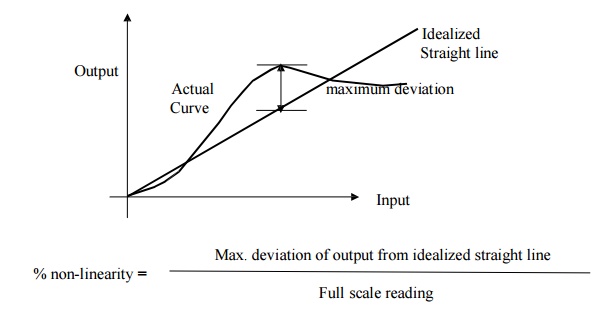 It is the degree of closeness with which a given value may be repeatedly measured. It is specified in terms of scale readings over a given period of time.

It is defined as the variation of scale reading & random in nature.

Drift may be classified into three categories:

If the whole calibration gradually shifts due to slippage, permanent set, or due to undue warming up of electronic tube circuits, zero drift sets in.

b)  span drift or sensitivity drift

If there is proportional change in the indication all along the upward scale, the drifts is called span drift or sensitivity drift.

In case the drift occurs only a portion of span of an instrument, it is called zonal drift.

If the input is slowly increased from some arbitrary input value, it will again be found that output does not change at all until a certain increment is exceeded.

This increment is called resolution.

If the instrument input is increased very gradually from zero there will be some minimum value below which no output change can be detected. This

minimum value defines the threshold of the instrument.

It is the ability of an instrument to retain its performance throughout is specified operating life.

The maximum allowable error in the measurement is specified in terms of some value which is called tolerance.

The minimum & maximum values of a quantity for which an instrument is designed to measure is called its range or span.

The set of criteria defined for the instruments, which are changes rapidly with time, is called ‘dynamic characteristics’.

i) Speed of response

It is defined as the rapidity with which a measurement system responds to changes in the measured quantity.

It is the retardation or delay in the response of a measurement system to changes in the measured quantity. The measuring lags are of two types:

In this case the response of the measurement system begins immediately after the change in measured quantity has occurred.

In this case the response of the measurement system begins after a dead time after the application of the input.

It is defined as the degree to which a measurement system indicates changes in the measurand quantity without dynamic error.

It is the difference between the true value of the quantity changing with time & the value indicated by the measurement system if no static error is assumed. It is also called measurement error.