Calibration is the process of making an adjustment or marking a scale so that the readings of an instrument agree with the accepted & the certified standard.

In other words, it is the procedure for determining the correct values of measurand by comparison with the measured or standard ones.

The calibration offers a guarantee to the device or instrument that it is operating with required accuracy, under stipulated environmental conditions.

The calibration procedure involves the steps like visual inspection for various defects, installation according to the specifications, zero adjustment etc.,

In a direct comparison, a source or generator applies a known input to the meter under test. The ratio of what meter is indicating & the known generator values gives the meter¶ s error. In such case the meter is the test instrument while the generator is the standard instrument. The deviation of meter from the standard value is compared with the allowable performance limit.

With the help of direct comparison a generator or source also can be calibrated.

If the test instrument is a meter then the same input is applied to the test meter as well a standard meter.

In case of generator calibration, the output of the generator tester as well as standard, or set to same nominal levels.

Then the transfer meter is used which measures the outputs of both standard and test generator.

All the instruments are calibrated at the time of manufacturer against measurement standards.

The different size of standards of measurement are classified as

International standards are defined as the international agreement. These standards,as mentioned above are maintained at the international bureau of weights an d measures and are periodically evaluated and checked by absolute measurements in term s of fundamental units of physics.

These international standards are not available to the ordinary users for the calibration purpose.

For the improvements in the accuracy of absolute measurements the international units are replaced by the absolute units in 1948.

Absolute units are more accurate than the international units.

These are highly accurate absolute standards, w hich can be used as ultimate reference standards. These primary standards are maintained at national standard laboratories in different countries.

These standards representing fundamental units as well as some electrical and mechanical derived units are calibrated independently by absolute measurements at each of the national laboratories.

These are not available for use, outside the national laboratories.

The main function of the primary standards is the calibration and verification of secondary standards.

As mentioned above, the primary standards are not ava ilable for use outside the national laboratories.

These are the basic tools of a measurement laboratory and are used to check an d calibrate the instruments used in laboratory for accuracy and the performance. 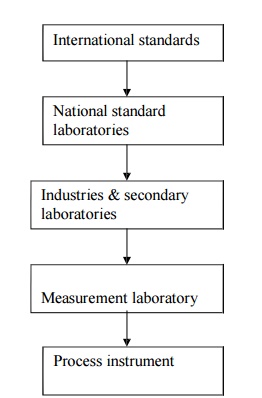