The furuncle or boil is a superficial skin infection that develops in a hair follicle, seba-ceous gland, or sweat gland. Blockage of the gland duct with inspissation of its contents causes predisposition to infection.

The furuncle or boil is a superficial skin infection that develops in a hair follicle, seba-ceous gland, or sweat gland. Blockage of the gland duct with inspissation of its contents causes predisposition to infection. Furunculosis is often a complication of acne vulgaris. Infection at the base of the eyelash gives rise to the common stye. The infected patient is often a carrier of the offending Staphylococcus, usually in the anterior nares. The course of the infection is usually benign, and the infection resolves upon spontaneous drainage of pus. No surgical or antimicrobic treatment is needed. Infection can spread from a fu-runcle with the development of one or more abscesses in adjacent subcutaneous tissues. This lesion, known as a carbuncle, occurs most often on the back of the neck but may involve other skin sites. Carbuncles are serious lesions that may result in bloodstream invasion (bacteremia).

Some individuals are subject to chronic furunculosis, in which repeated attacks of boils are caused by the same strain of S. aureus. There is little, if any, evidence of acquired immunity to the disease; indeed, delayed-type hypersensitivity to staphylococcal prod-ucts appears responsible for much of the inflammation and necrosis that develops. Chronic staphylococcal disease may be associated with factors that depress host immu-nity, especially in patients with diabetes or congenital defects of polymorphonuclear leukocyte function. However, in most instances, predisposing disease other than acne is not present.

S. aureus is most often seen as a secondary invader in group A streptococcal pustular im- petigo , but it can produce the skin pustules of impetigo on its own. Strains of S. aureus that produce exfoliatin cause a characteristic form called bullous im- petigo, characterized by large blisters containing many staphylococci in the superficial layers of the skin. Bullous impetigo can be considered a localized form of scalded skin syndrome.

S. aureus can cause a wide variety of infections of deep tissues by bacteremic spreadfrom a skin lesion that may be unnoticed. These include infections of bones, joints, deep organs, and soft tissues, including surgical wounds. More than 90% of the cases of acute osteomyelitis in children are caused by S. aureus. Staphylococcal pneumonia is typically secondary to some other insult to the lung, such as influenza, aspiration, or pulmonary edema. At deep sites the organism has the same tendency to produce localized, destruc-tive abscesses that it does in the skin. All too often the containment is less effective, and spread with multiple metastatic lesions occurs. Bacteremia and endocarditis can develop. All are serious infections that constitute acute medical emergencies. In all of these situa-tions, diabetes, leukocyte defects, or general reduction of host defenses by alcoholism, malignancy, old age, or steroid or cytotoxic therapy can be predisposing factors. Severe S.aureus infections, including endocarditis, are particularly common in drug abusers usinginjection methods.

Staphylococcal scalded skin syndrome results from the production of exfoliatin in a staphylococcal lesion, which can be quite minor (eg, conjunctivitis). Erythema and in-traepidermal desquamation takes place at remote sites from which S. aureus cannot be isolated (Fig 16 – 4). The disease is most common in neonates and children less than 5 years of age. The face, axilla, and groin tend to be affected first, but the erythema, bul-lous formation, and subsequent desquamation of epithelial sheets can spread to all parts of the body. The disease occasionally occurs in adults, particularly those who are immunocompromised. Milder versions of what is probably the same disease are staphylo-coccal scarlet fever, in which erythema occurs without desquamation, and bullous im-petigo, in which local desquamation occurs. 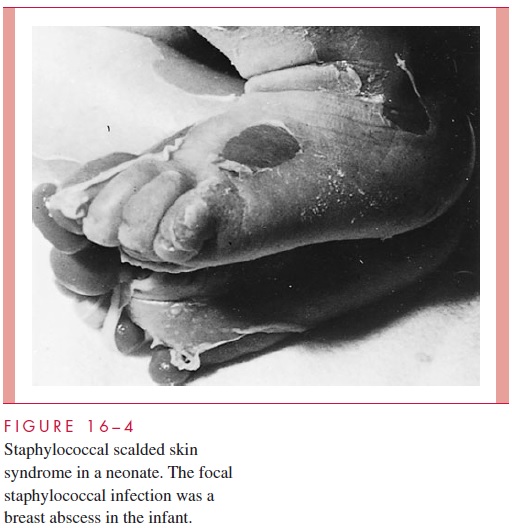 Toxic shock syndrome (TSS) was first described in children but came to public attention during the early 1980s, when hundreds of cases were reported in young women using in-travaginal tampons. The disease is characterized by high fever, vomiting, diarrhea, sore throat, and muscle pain. Within 48 hours, it may progress to severe shock with evidence of renal and hepatic damage. A skin rash may develop, followed by desquamation at a deeper level than in scalded skin syndrome. Blood cultures are usually negative. The out-break receded with the withdrawal of certain brands of highly absorbent tampons.

Ingestion of staphylococcal enterotoxin contaminated food results in acute vomiting and diarrhea within 1 to 5 hours. There is prostration, but usually no fever. Recovery is rapid, except sometimes in the elderly and in those with another disease.

Laboratory procedures to assist in diagnosis of staphylococcal infections are quite simple. Most acute, untreated lesions contain numerous polymorphonuclear leukocytes and large numbers of Gram-positive cocci in clusters. Staphylococci grow overnight on blood agar incubated aerobically. Catalase and coagulase tests performed directly from the colonies are sufficient for identification. Antibiotic susceptibility tests are indicated because of the emerging resistance of S. aureus to multiple antimicrobics, particularly methicillin and vancomycin.

Most boils and superficial staphylococcal abscesses resolve spontaneously without antimi-crobial therapy. Those that are more extensive, deeper, or in vital organs require a combi-nation of surgical drainage and antimicrobics for optimal outcome. Penicillins and cephalosporins are active against S. aureus cell wall peptidoglycan and vary in their sus-ceptibility to inactivation by staphylococcal β-lactamases. Although penicillin G is the treatment of choice for susceptible strains, the penicillinase-resistant penicillins (methi-cillin, nafcillin, oxacillin) and first-generation cephalosporins are more commonly used because of resistance. For strains resistant to these agents or patients with β-lactam hyper-sensitivity, the alternatives are vancomycin, clindamycin, or erythromycin. Synergy between cell wall – active antibiotics and the aminoglycosides is present when the staphy-lococcus is sensitive to both types of agents. Such combinations are often used in severe systemic infections when effective and rapid bactericidal action is needed, particularly in compromised hosts.

When penicillin was introduced to the general public following World War II, virtually all strains of S. aureus were highly susceptible. Since then, the selection of preexisting strains able to produce a penicillinase has shifted these proportions to the point at which 80 to 90% of isolates are now penicillin resistant. The penicillinase is encoded by plasmid genes and acts by opening the β-lactam ring, making the drug unable to bind with its target.

Alterations in the β-lactam target, the peptidoglycan transpeptidases (often called penicillin-binding proteins, or PBPs), is the basis for resistance to methicillin. These methicillin-resistant S. aureus (MRSA) strains are also resistant to the other penicillinase-resistant penicillins such as oxacillin. The most common mechanism is the acquisition of a gene for a new transpeptidase, which has reduced affinity for β-lactam antibiotics, but is still able to carry out its enzymatic function of cross-linking peptidoglycan.

The frequency of MRSA has great geographic variation. Most American hospitals re-port MRSA rates of 5 to 25%, but outbreaks are increasing and resistance rates over 50% have been reported in other countries. There are some problems in detecting MRSA; re-sistant cells may represent only a small portion of the total population (heteroresistance). Tests are generally performed with methicillin or oxacillin under technical conditions that facilitate detection of the resistant subpopulation, and the results extrapolated to other rel-evant agents. For example, oxacillin resistance is considered proof of resistance to methi-cillin, nafcillin, dicloxacillin, and all cephalosporins. Vancomycin is often used to treat serious infections with MRSA. The recent emergence of S. aureus with decreased suscep-tibility to vancomycin is of great concern, these strains are still very rare.

In patients subject to recurrent infection, such as chronic furunculosis, preventive mea-sures are aimed at controlling reinfection and, if possible, eliminating the carrier state. Clothes and bedding that may cause reinfection should be washed at a sufficiently high temperature to destroy staphylococci (70°C or higher) or dry-cleaned. In adults, the use of chlorhexidine or hexachlorophene soaps in showering and washing increases the bacte-ricidal activity of the skin . In such individuals, or persons found to be a source of an outbreak, anterior nasal carriage can be reduced and often eliminated by the combination of nasal creams containing topical antimicrobics (eg, mupirocin, neomycin, and bacitracin) and oral therapy with antimicrobics that are concentrated within phago-cytes and nasal secretions (eg, rifampin or ciprofloxacin). Attempts to reduce nasal car-riage more generally among medical personnel in an institution are usually fruitless and encourage replacement of susceptible strains with multiresistant ones.

Chemoprophylaxis is effective in surgical procedures such as hip and cardiac valve replacements, in which infection with staphylococci can have devastating consequences. Methicillin, a cephalosporin, or vancomycin given during and shortly after surgery may reduce the chance for intraoperative infection while minimizing the risk for superinfec-tion associated with longer periods of antibiotic administration.