Home | | Medical Microbiology | Characteristics for Identification and Subtyping - Staphylococcus aureus
Posted On :  30.07.2017 09:36 am

After overnight incubation on blood agar, S. aureus produces white colonies that tend to turn a buff-golden color with time, which is the basis of the species epithet aureus (golden).

CHARACTERISTICS FOR IDENTIFICATION AND SUBTYPING

After overnight incubation on blood agar, S. aureus produces white colonies that tend to turn a buff-golden color with time, which is the basis of the species epithet aureus (golden). Most, but not all, strains show a rim of clear β-hemolysis surrounding the colony.

The most important test used to distinguish S. aureus from other staphylococci is the production of coagulase, which nonenzymatically binds to prothrombin, forming a com-plex that initiates the polymerization of fibrin. It is demonstrated by incubating staphylo-cocci in plasma; this produces a fibrin clot within hours. A dense emulsion of S. aureus cells in water also clumps immediately on mixing with plasma due to direct binding of fibrinogen to a factor on the cell surface. This is the basis of a quick laboratory test called the slide clumping test, which has a high correlation with coagulase (95%). Commercial agglutination tests that correlate well with the coagulase test are also used.

S. aureus isolates can be organized into broad groups, and individual strains can be“fingerprinted” for epidemiologic purposes by using bacteriophage typing. This procedure depends on differing susceptibilities of the organism to lysis by bacteriophages derived from lysogenic strains of S. aureus.Suspensions of the phages are dropped onto a plate seeded with the staphylococcal strain to be tested, and the plates are incubated. Lysis in the area of a drop indicates susceptibility to that phage (Fig 16 – 1). The phage type is simply a listing of the phages that gave a positive reaction (eg, 52/52A/80/81). Phage typing is a specialized procedure performed only in a few reference laboratories. 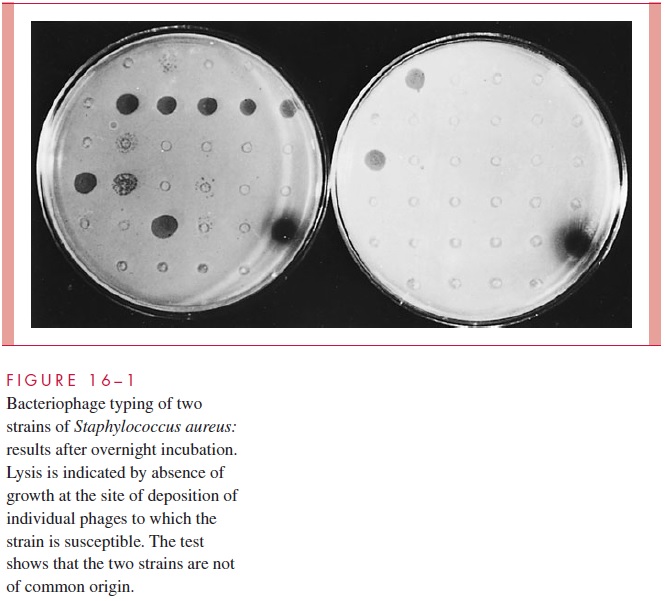