Infections produced by S. aureus are typified by acute, aggressive, locally de-structive purulent lesions. The most familiar of these is the common boil, a painful lump in the skin that has a necrotic center and fibrous reactive shell. In-fections in organs other than the skin such as the lung, kidney, or bone are also focal and destructive but have greater potential for extension within the organ and beyond to the blood and other organs. Such infections typically produce high fever, systemic toxicity, and may be fatal in only a few days. A subgroup of S.aureus infections has manifestations produced by secreted toxins that contributeto the primary infection. Symptoms include diarrhea, rash, skin desquamation, or multiorgan effects as in staphylococcal toxic shock syndrome (TSS). Ingestion of preformed staphylococcal enterotoxin causes a form of food poisoning in which vomiting begins in only a few hours.

The basic human habitat of S. aureus is the anterior nares. About 30% of individuals carry the organism in this site at any given time, and rates among hospital personnel and patients may be much higher. Some nasal carriers and individuals with colonization at other sites such as the perineum may disseminate the organism extensively with desqua- mated epithelial cells, thus constituting a source of infection to others. The central prob- lem in understanding the link between colonization and disease is that although we know some strains clearly have enhanced potential to produce disease, we have no way to predict which they are. Bacteriophage typing allows tracking of strains during an outbreak but by itself allows no conclusions about virulence.

Most S. aureus infections acquired in the community are autoinfections with strains that the subject has been carrying in the anterior nares, on the skin, or both. Community outbreaks are usually associated with poor hygiene and fomite transmission from individ- ual to individual. Unlike many pathogenic vegetative organisms, S. aureus can survive long periods of drying; for example, recurrent skin infections can result from use of cloth- ing contaminated with pus from a previous infection.

Hospital outbreaks caused by a single strain of S. aureus most commonly involve pa- tients who have undergone surgical or other invasive procedures. The source of the out- break may be a patient with an overt or inapparent staphylococcal infection (eg, decubitus ulcer) that is then spread directly to other patients on the hands of hospital personnel. A nasal or perineal carrier among medical, nursing, or other hospital personnel may also be the source of an outbreak, especially if carriage is heavy and numerous organisms are disseminated. The most hazardous source is a medical attendant who works despite hav-ing a staphylococcal lesion such as a boil. Hospital outbreaks of S. aureus infection can be self-perpetuating: infected patients and those who attend them frequently become car-riers, and the total environmental load of the causative staphylococcus is increased. Bac-teriophage typing and patterns of resistance to antimicrobics (antibiograms) are used as epidemiologic tools to detect carriers who may have initiated or contributed to continua-tion of the outbreak.

Staphylococcal food poisoning has been an unhappy and embarrassing sequel to innu-merable group picnics and wedding receptions in which gastronomic delicacies have been exposed to temperatures that allow bacterial multiplication. Characteristically, the food is moist and rich (eg, potato salad, creamy dishes). The food becomes contaminated by a preparer who is a nasal carrier or has a staphylococcal lesion. If the food is inadequately refrigerated, the staphylococci multiply and produce enterotoxin in the food. Because of the heat resistance of the toxin, toxicity persists even if the food is boiled before eating.

The initial stages of colonization by S. aureus are mediated by a number of surface pro-teins, each of which binds to host elements in or covering tissues, body fluids, or foreign bodies such as catheters. Proteins that bind to fibronectin, fibrinogen, and collagen have been discovered, and others are under investigation. Mechanisms for bacterial extension beyond the surface are not clearly understood. Of the many potential virulence factors produced by S. aureus, none can be assigned the single or even primary role contributing to the ability of the bacteria to multiply and cause progressive lesions in tissues. In fact, S.aureus is generally of quite low infectivity unless trauma, foreign matter, or other localconditions provide access for initiation of infection. Experimentally, intradermal injection of up to 106 organisms is required to initiate a local lesion unless a suture or talcum pow-der is added with the bacteria.

Once beyond the mucosal or skin barrier, any mechanism that protects the organisms from phagocytosis may allow multiplication to continue long enough for products such as α-Toxin to initiate local injury. One factor known to interfere with phagocytosis is surface protein A. Its binding to the Fc portion of IgG may compete with phagocytic cells for available IgG – Fc sites, thus effectively diminishing opsonization. Production of coagu-lase can retard migration of phagocytes to the site of infection, and even phagocytosed S.aureus may resist lysosomal killing. The acute inflammatory response continues, and thedeveloping lesion has a marked tendency for localization, perhaps due to the fibrotic reac-tion to the α-Toxin – mediated injury to host cells.

The fate of the lesion depends on the ability of the host to localize the process, which differs depending on the tissue involved. In the skin, spontaneous resolution of the boil by granulation and fibrosis is the rule. In the lung, kidney, bone, and other organs, the process may continue to spread with satellite foci and involvement of broad areas. In all instances the action of the cytotoxins is highly destructive, creating cavities and massive necrosis with little respect to anatomic boundaries. In the worst cases, the staphylococci are not contained, spreading to the bloodstream and distant organs. Circulating staphylo-cocci may also shed cell wall peptidoglycans, producing massive complement activation, leukopenia, thrombocytopenia, and a clinical syndrome of septic shock.

If the strain of S. aureus causing any of the effects described above also produces one or more of the exotoxins, those actions are added to those of the primary infection. The pri-mary infection serves as a site for absorption of the toxin and need not be extensive or even clinically apparent for the toxic action to occur. In staphylococcal food poisoning, there is no infection at all. The contaminating bacteria produce pyrogenic exotoxin in the food that can initiate its enterotoxic action on the intestine within hours of its ingestion.

The in vivo production of toxin takes at least a few days and may exert its effect locally or systemically. Exfoliative toxin-producing strains cause blisterlike separation of the epidermis by their action on intercellular junctions, which is most commonly localized to the site of skin infection. In staphylococcal scalded skin syndrome, ab-sorbed toxin causes extensive epithelial desquamation at sites remote from the primary infection.

In staphylococcal TSS, the pyrogenic exotoxin TSST-1 is produced during the course of a staphylococcal infection with systemic disease as a result of absorption of toxin from the local site. Menstruation-associated TSS requires a combination of improbable events. Less than 5% of women carry S. aureus in their vaginal flora, and only one in five of these staphylococci have the potential to produce TSST-1. In the presence of such a strain, the combination of menstruation and high-absorbency tampon usage appear to pro-vide growth conditions that enhance the production of TSST-1. Toxin absorbed from the vagina can then circulate to produce superantigen-mediated cytokine release and direct effects on the vasculature (Fig 16 – 3). 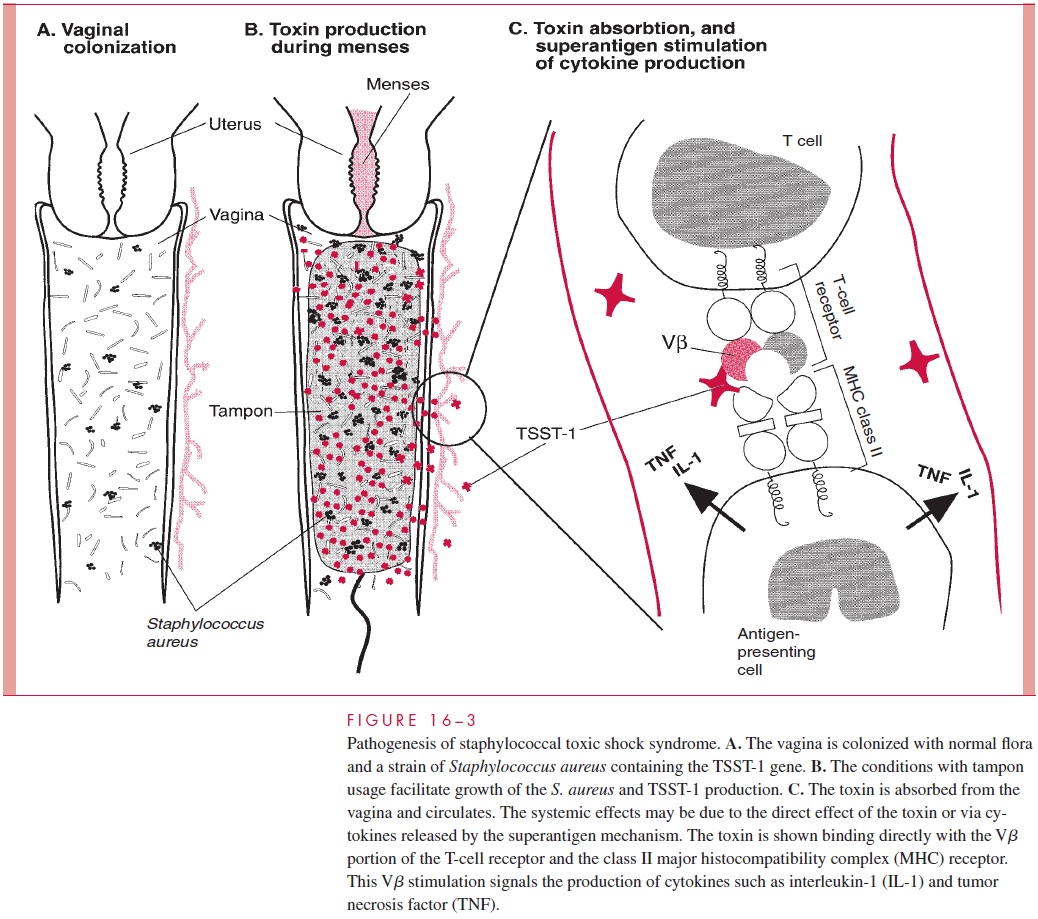 Some cases of full-blown staphylococcal TSS are associated with strains that do not produce TSST-1. This is particularly true of nonmenstrual cases. Other PTSAgs have been detected in these strains and have been shown to produce experimental toxic shock. TSS may be the result of in vivo production of any of the staphylococcal pyrogenic exo-toxins, with TSST-1 simply the most common offender. The mechanisms by which the pyrogenic exotoxins produce the multiple renal, cutaneous, intestinal, and cardiovascular manifestations of TSS are not known.

The natural history of staphylococcal infections indicates that immunity is of short dura-tion and incomplete. Chronic furunculosis, for example, can recur over many years. The relative roles of humoral and cellular immune mechanisms are uncertain, and attempts to induce immunity artificially with various staphylococcal products have been disappoint-ing at best. In menstruation-associated TSS, many patients have low or absent antibody levels to TSST-1 and often fail to mount a significant antibody response during the dis-ease. Repeated attacks have been recorded, suggesting a genetic predisposition.