The most commonly employed standardization method uses one or more external standards containing known concentrations of analyte. These standards are identi- fied as external standards because they are prepared and analyzed separately from the samples.

A quantitative determination using a single external standard was described at the beginning of this section, with k given by equation 5.3. Once standardized, the concentration of analyte, CA, is given as 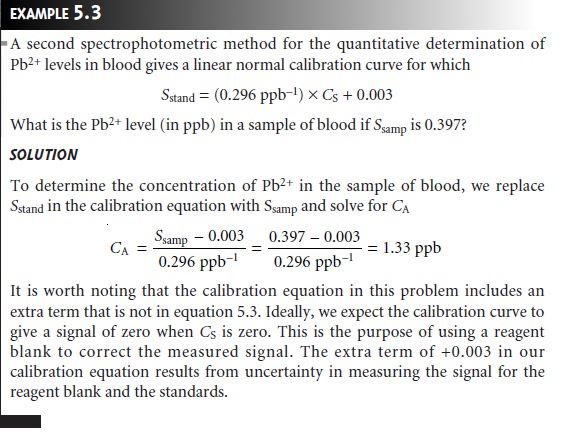 An external standardization allows a related series of samples to be ana- lyzed using a single calibration curve. This is an important advantage in labo- ratories where many samples are to be analyzed or when the need for a rapid throughput of samples is critical. Not surprisingly, many of the most com- monly encountered quantitative analytical methods are based on an external standardization. There is a serious limitation, however, to an external standardization. The relationship between Sstand and CS in equation 5.3 is determined when the analyte is present in the external standard’s matrix. In using an exter- nal standardization, we assume that any difference between the matrix of the standards and the sample’s matrix has no effect on the value of k. A proportional determinate error is introduced when differences between the two matrices cannot be ignored. This is shown in Figure 5.4, where the re- lationship between the signal and the amount of analyte is shown for both the sample’s matrix and the standard’s matrix. In this example, using a normal calibration curve results in a negative determinate error. When matrix problems are expected, an effort is made to match the matrix of the standards to that of the sample. This is known as matrix matching. When the sample’s matrix is unknown, the matrix effect must be shown to be negligi- ble, or an alternative method of standardization must be used. Both approaches are discussed in the following sections.