Analytical chemistry is concerned with the identification of a substance, the elucidation of its structure and quantitative analysis of its composition.

Analytical chemistry is concerned with the identification of a substance, the elucidation of its structure and quantitative analysis of its composition.

It is an interdisciplinary branch of science which deals with various disciplines of chemistry such as inorganic, organic, physical, industrial and biochemistry

The methods dependent upon measurement of an electrical property and those based upon determination of the extent to which radiation is absorbed or upon assessment of the intensity of emitted radiation, all require the use of a suitable instrument, eg. Polarograph, spectrophotometer etc., and in consequence such methods are referred to as instrumental methods.

Spectroscopy is the branch of science dealing with the study of interaction of electromagnetic radiation with matter.

It is a powerful tool available for the study of atomic and molecular structure and it is also used in the analysis of most of the samples.

The study of spectroscopy is divided into two types. They are,

It deals with the interactions of electromagnetic radiation with atoms.

It deals with the interaction of electromagnetic radiation with molecules. 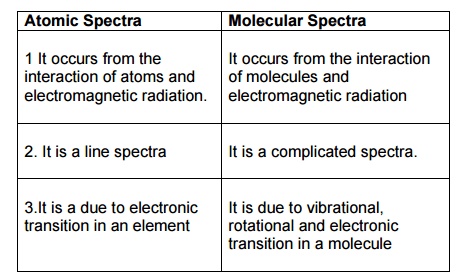 1. It occurs from the interaction of atoms and electromagnetic radiation.

3.It is a due to electronic transition in an element

1. It occurs from the interaction of molecules and electromagnetic radiation

2. It is a complicated spectra.

3. It is due to vibrational, rotational and electronic transition in a molecule

Electromagnetic radiation is produced due to the interaction between the electric field and the magnetic field.

Electromagnetic radiation is divided into number of regions according to their wave length.

It can be represented as,

It is the distance between two successive crests of a wave.

It is the number of waves crossing a point in unit time. It is denoted by, ע

The product of the wavelength and the frequency is a constant called the velocity of light (or) speed of light. That is,

It is the reciprocal of the wave length. It is denoted by

Wave number is expressed in units of per centimeter,

When a beam of polychromatic light is passed through a prism or grating it splits up into seven different colour. The set of colours thus obtained is called a spectrum.

The complete spectrum may extend from gamma rays of wave length 10-13 m to radiowaves of wavelength 105m.

There are two main classes of spectra namely,

When white light (ie.having all the wave length) is passed through an absorbing substance and then observed through a spectroscope, it is found that certain colours (or) wave lengths are missing and dark lines appear at their places. The specrtrum so obtained is called absorption spectrum.

When the light emitted by a substance is passed through a prism and examined directly with a spectroscope, the spectra obtained is referred to as emission spectrum.

There are two laws which govern the absorption of light by the molecules.

When a beam of monochromatic light is passed through a solution of an absorbing substance, the rate of decrease of intensity of radiation (‘dI’) with thickness of the absorbing solution (‘dx’) is directly proportional to the intensity of incident radiation (I).

Mathematically, the law is expressed as,

On integrating the above expression between the limits,

When a beam of monochromatic light is passed through a solution of an absorbing substance, the rate of decrease of intensity of radiation (‘dI’ ) with thickness of absorbing solution (‘dx’) is directly proportional to the intensity of incident radiation (I), as well as concentration of the solution( c).

Mathematically, it is expressed as 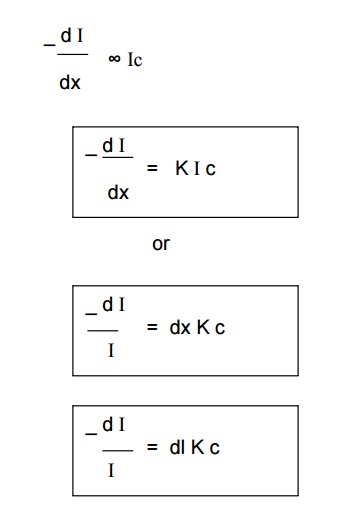 On integrating the above expression between the limits, 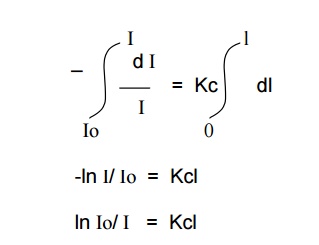 ε K=/2.303, is called the molar absorption coefficient and

This equation is known as Beer – Lambert’s Law

This law is not obeyed if the radiation used in polychromatic.

1.     It is applicable only for dilute solutions.

3.     Deviation may occur, if the solution contains impurities.

Absorption radiation in the UV (wave length range = 200 – 400 nm) and Visible (wave length range = 400 – 750 nm) regions of the electromagnetic spectrum results transitions between electronic levels. This is due to the larger energy change corresponds to 100 – 100,000 kJ/mol which cause simultaneous

change in vibrational and rotation energies.

Generally energy change due to electronic transition is greater than that of vibrational and rotational transitions. Hence the UV and Visible spectra of simple molecules exihibit narrow absorption peaks.

The vibrational and rotational fine structure lines are not observed during the spectrum is run in solution. This is because of the physical interactions between sample organic molecule and the solvent molecule, cause collisional broadening of the lines.

Electronic absorption spectrum of a solution of benzene in hexane.

The above spectra of benzene shows larger peaks at 250 nm due to the presence of П electronsaks &andtroughssmallerindicatevibrationspeofmolecules.

Types of electrons in organic molecules involving in transitions: 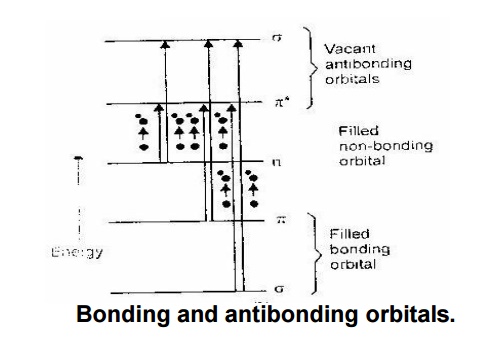 These transitions are classified into two types as follows:

The order of transition is

Out of the above possible transitions, the last three ones account for the absorption in 200

The structural units of the compound having n or selective wavelength of UV – Visible radiation are called chromophores.

The polar groups with lone pair of electrons support the intensity of chromophores are called auxochromes. 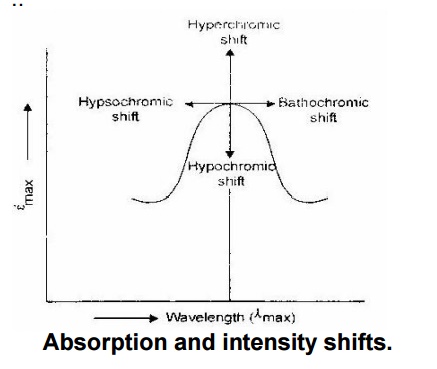 It is also called red shift. The substitution of a selective group in a molecule makes the absorption to longer wavelength is called bathochromic shift. Example: Alkyl substitution on olefins.

It is also called blue shift. The substitution of a selective group in a molecule make the absorption to shorter wavelength is called hypsochromic shift. Example: Chlorine substitution on olefins.

The substitution of a selective group in a molecule causes increase in the intensity of absorption maximum of the molecule, and then the effect is called hyperchromic effect. Example: Methyl substitution on benzene.

The substitution of a selective group in a molecule causes decrease in the intensity of absorption maximum of the molecule, and then the effect is called hypochromic effect. Example: Chlorine substitution on benzene.

Hydrogen or deuterium lamps are used. It provides stable, continuous and sufficient intensity.

It is also called monochromator. It permits the radiation of required wavelength

It is a transparent and uniformly constructed container which contains either sample solution or reference solvent.

It converts the absorbed radiation into current. There are three types of detectors, viz., Barrier layer cell, photo multiplier tube and photo cell.

Recorder: It converts the signal reaches to itself into spectrum of a molecule.

The radiation from the source is passed through the monochromator where it splitted into two equal beams, one half is passed into the sample cell and another half is passed into the reference cell containing solvent. The detector will measure the comparison of intensities of beam of light. If the sample absorbs light then the intensity of sample beam is less than the intensity of reference beam. It will be recorded as a signal in recorder. The instruments gives output graph (absorption spectrum) of a plot of the wavelength verses absorbance (A) of the light at each wavelength, where A = log (I0/I).

1.     It is used to determine the structure of vitamins, detecting steric hindrance, study rates of reactions and determine the dissociation constants of acids and bases from the change of absorption spectra with pH.

2.     It is used to determine the dissociation energy of a molecule accurately from the wavelength.

3.     It provides the information regarding moment of inertia, vibrational frequency and interatomic distances of diatomic molecules.

4.     It is used to identify the cis and trans isomers of a compound from absorption spectra.

6.     It is used to determine the structure of organic compounds. For example, isatin can be assigned following two possible structures:

However, the corresponding structures of two possible methyl ethers are known to us.

On comparison of the spectra of isatin with that of two methyl isomers (III) and (IV), the spectrum of isatin is similar to that of N-methyl ether (III). Hence isatin is assigned the structure (I).

It is used in quantitative analysis to determine the concentration of unknown sample by using Beer – Lambert’s equation, A = E c l.

The spectra of a molecule arised in IR region (12500 cm – 1 – 50 cm – 1 ) due to the absorption of energy and transition occurs between different vibrational levels. Hence it is called vibration spectroscopy.

All types of molecules cannot interact with IR radiation. Only those molecules which exhibit change in dipole moment during a vibration can exhibit IR spectra.

Evidently, the homo-nuclear diatomic molecules like H2, O2, N2, Cl2, etc do not show change in dipole moment during vibration. Consequently, these do not exhibit IR

The IR spectral region at 4000 cm – 1 – 600 cm – 1 gives intense absorption bands associated with bending and stretching vibrations of particular functional group in organic compounds. This region is called group frequency region. It is used to identify the types of functional groups present in organic molecules.

The molecules have certain number of vibrational modes. It can be calculated using the following formulae.

(a)For a linear molecule, No of fundamental vibrational mode = 3n – 5

(b)For a non – linear molecule, No of fundamental vibrational mode = 3n – 6 where n = number of atoms in a molecule. 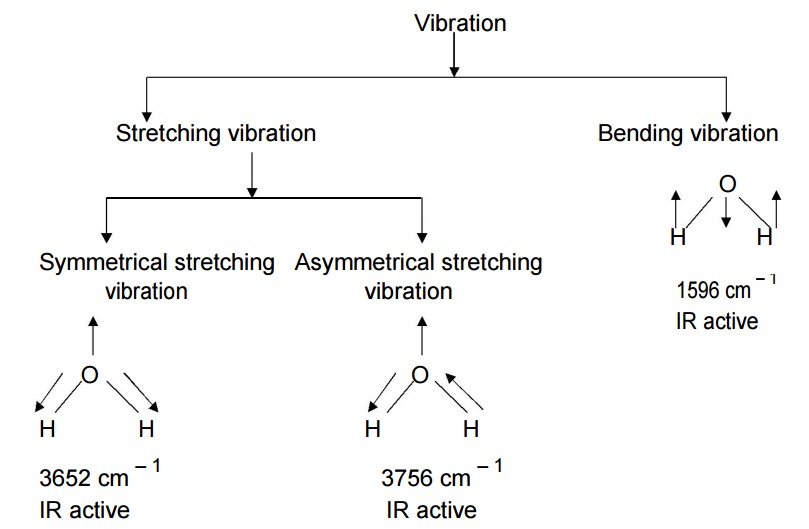 Generally stretching frequency is greater than bending frequency, because more energy is required to stretch the bond than to bend. All the above three vibrations are IR active and giving IR spectra at various frequencies. Hence IR active molecule undergoes change in dipole moments. 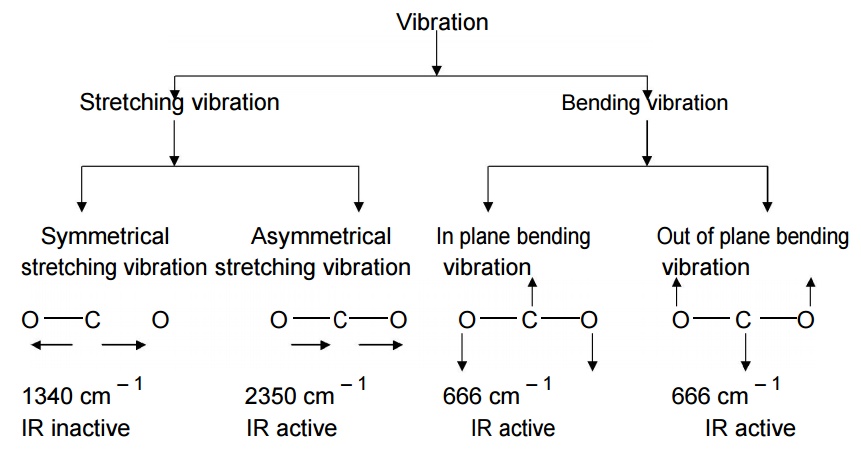 In symmetrical stretching, both bonds are shortened or elongated to the same extent. Hence there is no change in dipole moment. So it is IR inactive.

In asymmetrical stretching, one of the bonds is shortened and the other is elongated. Hence there is change in bond length and dipole moment. So it is IR active.

In bending, both in-plane and out of plane bending involves variation of bond angle. Hence there is change in bond angle and dipole moment. So it is IR active.

The Nernst glower (Oxides of Zr, Y and Er) is heated to 1500oC to give IR radiation, which is used as radiation source.

Optical prism: It is also called mirror, which is used to reflect the radiation on filter.

It is also called monochromator, which sent the individual frequencies to the detector.

Amplifier: It amplifies the current received from the detector. Motor: It drives the wedge.

Recorder: It draws the IR spectrum, based on the movement of wedge.

The IR radiation from radiation source is splitted into two equal half beams; one half is passed into the sample cell and another half is passed into the reference cell containing solvent respectively. Then these beams are fall on the mirror and reflected to the monochromator, where the selective radiation is sent to the detector. The radiation received by the detector is converted into current. It is amplified and coupled to the motor which drives a wedge. Based on the movement of the wedge the recorder draws the absorption bands on the chart. Finally, we get a spectrum as a graph of Transmittance verses wave number from the IR spectrophotometer.

1.     It is used to identify the presence of functional groups in organic compounds. For example, IR spectra of both benzaldehyde and acetophenone shows absorption peak at 1700 cm – 1. This indicates that the presence of keto group (C=O) in both the compounds.

3.     It is used to distinguish inter and intra molecular hydrogen bonding in organic compounds.

4.     It is used to study the molecular symmetry, dipole moment, structure, bond angle and bond length, etc. of various organic and inorganic compounds.

5.     It is used to distinguish positional isomers of organic compounds.

6.     It is used in rapid quantitative analysis of mixture of compounds.

7. It is used to study the kinetics of a reaction