Given below are five main qualities for true sportsmanship. 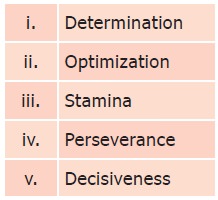 Get into groups of four. Each group will choose one quality to talk about to the whole class for about one minute. But before you talk, you have two minutes to think about it. You can make notes if you wish.

L. Prepare a speech in about 80-100 words for the morning assembly, stressing on the importance of games and sports in ensuring a healthy body and mind.

M. Your friend who lives in another town/city has won his/her championship trophy in the recent sports meet. Write a letter congratulating him/ her.

N. Collect information from newspapers, magazines, periodicals and books about any two famous sports women. Prepare their profiles. Use the following format. 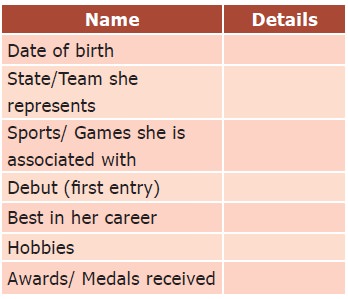 O. Write a newspaper article in about 100 words, comparing the achievements of the two sportswomen based on the information you have already collected.

Tamil Nadu is deeply rooted in a great tradition of folk arts and crafts, which display the customs and skills that have come down from generations. The folk music and dances of Tamil Nadu represent the ethos, aesthetic, values and melody of the region. Traditionally, folk dances and music are performed during festivals and community functions. The following article describes some of the folk musical styles and dances of Tamil Nadu.

Karagaattam is a popular folk dance of Tamil Nadu, which involves balancing a pot on the head to musical accompaniment. The Karagam pots are decorated with a cone of flower arrange-ments, topped by a paper parrot. The parrot swings as the dancer swings along. 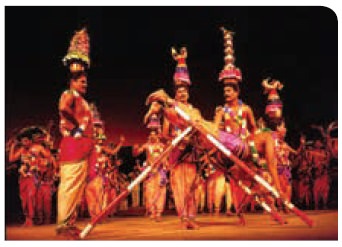 Karagaattam has two divisions— atta karagam and sakthi karagam. This form of dance is very popular all over Tamil Nadu. Both male and female performers participate in this dance. Acrobatics such as dancing on a rolling block of wood, moving up and down a ladder, threading a needle while bending backwards form a part of this dance.

Kavadi Aattam is one of the predominant folk dances of Tamil Nadu. 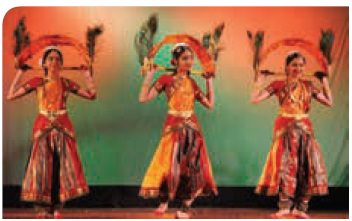 When the ancient Tamils went on pilgrimages, they used to carry offerings tied on either end of a long stick, balanced on their shoulders. A kavadi is made of bamboo strips and a light pole. To lessen the boredom of the long travel, they sing and dance in praise of God. Kavadi Aattam traces its origin to this practice. This led to the composition of special songs for carrying the kavadi.

Poikkal Kudhirai Aattam is a dance in which the dancer puts on the dummy figure of a horse on his / her hips. 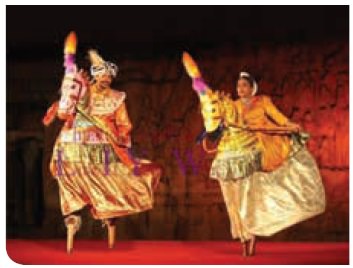 This folk dance needs a lot of training and skill. The dummy is made of lightweight materials and the cloth at the sides of the dummy swings to and fro covering the legs of the dancer who dons wooden legs so that they look like the hooves of the horse. While performing, the dancer brandishes either a sword or a whip.

Parai Aattam is a special type of dance in Tamil culture in which the performers beat the parai and dance to its rhythm. 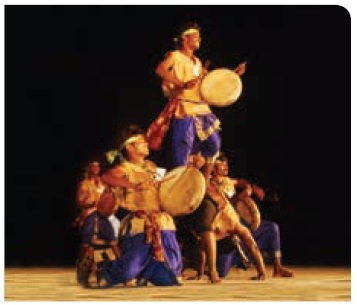 This is one of the oldest traditional dances. In olden days, the parai was used for multiple reasons, ranging from warning people about the upcoming war, requesting civilians to leave the battlefield, announcing victory or defeat, stopping a breach of a water body, gathering farmers for farming activities, warning wild animals about human presence, during festivals, weddings, celebrations, worship of nature and so on. Parai Attam plays a prominent part in all the celebrations in Tamil Nadu even today.

Bommalaattam or Puppetry is held in rural areas of Tamil Nadu during festivals and fairs. Skilled puppeteers manipulate the puppets with strings or wires.

They stand behind a screen and the puppets are held in front. The puppetry depicts stories mainly from the Puranas, epics and folklore. Even during Indian freedom struggle awareness programmes for the common people were conducted through puppet shows to instill patriotism among the people.

Therukoothu is usually conducted during village festivals in the months of Aadi and Panguni. Theru koothu is performed on the streets and in open air. In this dance form, make-up and costumes are considered very important. 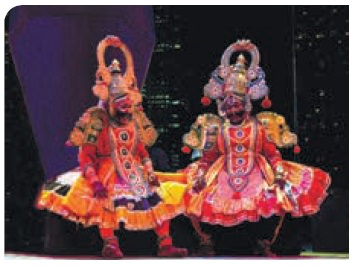 The performance involves storytelling, songs, dance and dialogue rendering. The performances are based on stories from Puranas, Ramayana, Mahabharata and the local folklore.

Silambaattam is a martial art form, practised from the days of the Tamil kings. 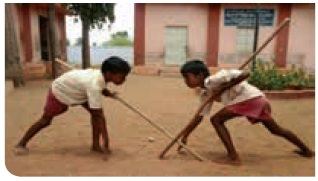 It has metamorphosed into a non-violent form of folk dance, adding stepping styles into the dance to the measure of time. This martial art form also teaches the performer the methods of self-defense. 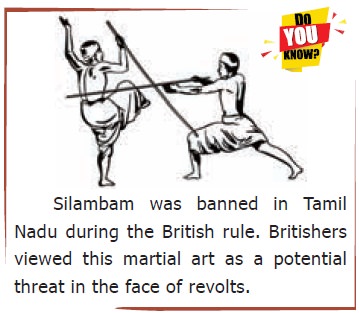 A. Answer the following questions briefly.

1.     What do Tamil Nadu folk dances and folk arts represent?

2.     When are folk dances and folk music usually performed?

4.     How were offerings carried during the ancient period?

5.     Bring out a few differences between the two art forms Therukoothu and Bommalattam. 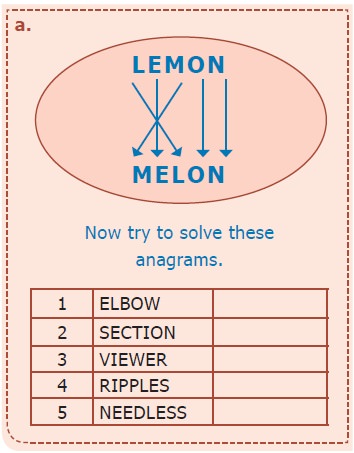 B. Work with a partner

Pick out two words from the article on folk culture and folklore of Tamil Nadu with which you can form anagrams. Take turns and ask your partner to solve the anagram and come out with the right words.

C. Work in groups of 4-6. Choose one folk art form, that is rarely or no longer per-formed. Find out the reasons for this and suggest practical solutions/steps that can be taken to prevent this. After discussion and research, conduct a talk show in the class on the topic FOLK ARTS - A REVIVAL. The following inputs will help you.

Each group will consist of the following members.

3. A representative from an NGO engaged in reviving some of the dying folk arts

5. A citizen from the city.

NOTE: Your teacher will distribute role cards with cues to each member of the group to help you play your roles.