By touching a ringing bell or a musical instrument while it is producing music, you can conclude that sound is produced by vibrations. The vibrating bodies produce energy in the form of waves, which are nothing but sound waves.

When you think about sound, the questions that arise in your minds are: How is sound produced? How does sound reach our ears from various sources? What is sound? Is it a force or energy? Let us answer all these questions.

By touching a ringing bell or a musical instrument while it is producing music, you can conclude that sound is produced by vibrations. The vibrating bodies produce energy in the form of waves, which are nothing but sound waves (Figure 5.1). 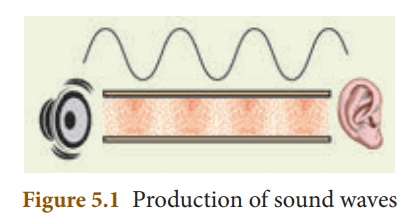 Sound waves are longitudinal waves that can travel through any medium (solids, liquids, gases) with a speed that depends on the properties of the medium. As sound travels through a medium, the particles of the medium vibrate along the direction of propagation of the wave. This displacement involves the longitudinal displacements of the individual molecules from their mean positions. This results in a series of high and low pressure regions called compressions and rarefactions as shown in figure 5.2. 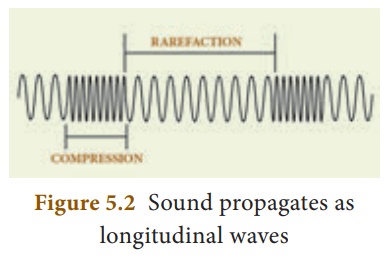 2. Categories of sound waves based on their frequencies

(i) Audible waves – These are sound waves with a frequency ranging between 20 Hz and 20,000 Hz. These are generated by vibrating bodies such as vocal cords, stretched strings etc.

(ii) Infrasonic waves – These are sound waves with a frequency below 20 Hz that cannot be heard by the human ear. e.g., waves produced during earth quake, ocean waves, sound produced by whales, etc.

(iii) Ultrasonic waves – These are sound waves with a frequency greater than 20 kHz, Human ear cannot detect these waves, but certain creatures like mosquito, dogs, bats, dolphins can detect these waves. e.g., waves produced by bats.

3. Difference between the sound and light waves 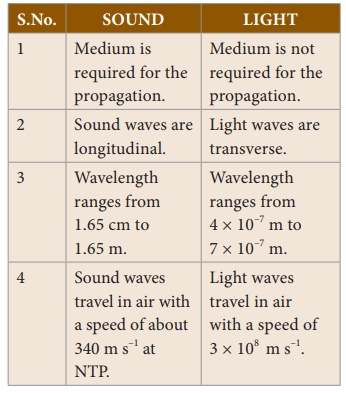 When you talk about the velocity associated with any wave, there are two velocities, namely particle velocity and wave velocity. SI unit of velocity is metre (m)

The velocity with which the particles of the medium vibrate in order to transfer the energy in the form of a wave is called particle velocity.

If the distance travelled by one wave is taken as one wavelength (λ) and, the time taken for this propagation is one time period (T), then, the expression for velocity can be written as

Therefore, velocity can be defined as the distance travelled per second by a sound wave. Since, Frequency (n) =1/T, equation (5.1) can be written as

Effect of relative humidity: When humidity increases, the speed of sound increases. That is why you can hear sound from long distances clearly during rainy seasons.

Speed of sound waves in different media are given in table 5.1. 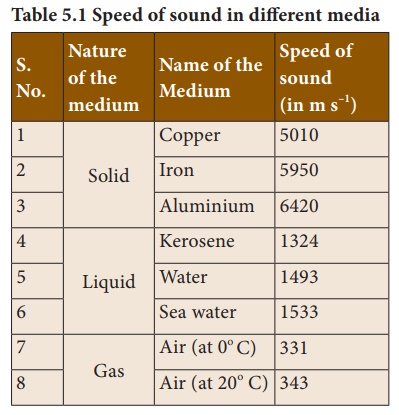 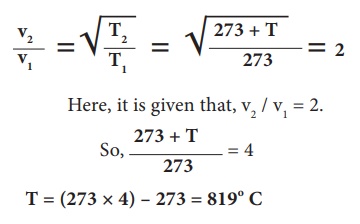