An echo is the sound reproduced due to the reflection of the original sound from various rigid surfaces such as walls, ceilings, surfaces of mountains, etc.

An echo is the sound reproduced due to the reflection of the original sound from various rigid surfaces such as walls, ceilings, surfaces of mountains, etc.

If you shout or clap near a mountain or near a reflecting surface, like a building you can hear the same sound again. The sound, which you hear is called an echo. It is due to the reflection of sound. One does not experience any echo sound in a small room. This does not mean that sound is not reflected in a small room. This is because smaller rooms do not satisfy the basic conditions for hearing an echo.

1. The persistence of hearing for human ears is 0.1 second. This means that you can hear two sound waves clearly, if the time interval between the two sounds is at least 0.1 s. Thus, the minimum time gap between the original sound and an echo must be 0.1 s.

2. The above criterion can be satisfied only when the distance between the source of sound and the reflecting surface would satisfy the following equation: 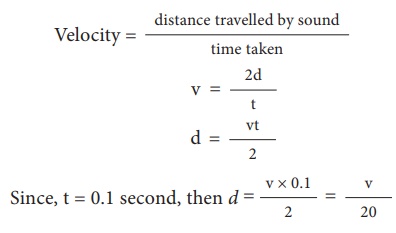 ·                 Some animals communicate with each other over long distances and also locate objects by sending the sound signals and receiving the echo as reflected from the targets.

·                 The principle of echo is used in obstetric ultrasonography, which is used to create real-time visual images of the developing embryo or fetus in the mother’s uterus. This is a safe testing tool, as it does not use any harmful radiations.

A source of sound pulses, a measuring tape, a sound receiver, and a stop watch.

1.              Measure the distance ‘d’ between the source of sound pulse and the reflecting surface using the measuring tape.

4.              Repeat the experiment for three or four times. The average time taken for the given number of pulses is calculated.

Calculation of speed of sound:

The sound pulse emitted by the source travels a total distance of 2d while travelling from the source to the wall and then back to the receiver. The time taken for this has been observed to be ‘t’. Hence, the speed of sound wave is given by: