Harvests from aquaculture farms have to be sorted according to species when polyculture is practised.

Harvests from aquaculture farms have to be sorted according to species when polyculture is practised. When there is considerable differences in size between species mechanical graders can be used, but even then only a partial sorting is usually possible. The rest has to be done by hand (fig. 11.9). The more common need is grading according to size. Market price and consumer preference may depend very much on size; extreme examples are shrimps and tilapia. Different types of graders are in use in the fishing industry and some of them can be used in farms as well. A simple adjustable bar grader is commonly used: by adjusting the distance between the bars different size groups can be separated. Some graders are made with revolving rollers or screens of different sizes. 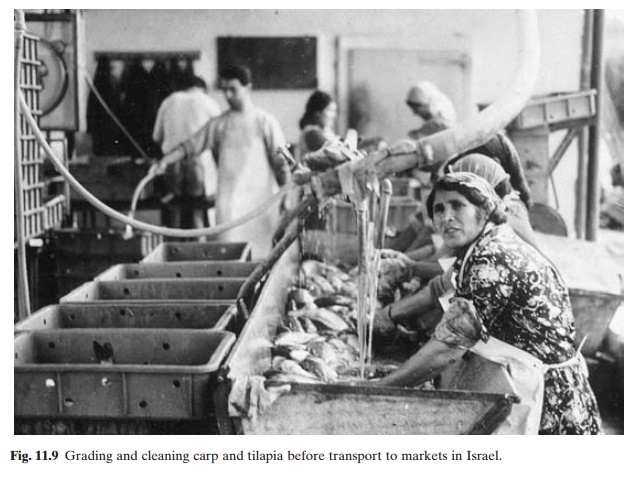 Since there is usually a market preference for live animals, there will also be a need at times to sort out live fish from dead or weak ones which are not likely to survive long-distance live haulage. The live and healthy fish should be stored for transport in special holding tanks with an adequate supply of clean water. If they have to be held for longer periods, it will be advisable to aerate the water and ensure a proper water temperature. Unless storage is for unduly long periods, it is better to refrain from feeding them.

As already mentioned, certain species of fish like the American catfish and common carp when grown in muddy ponds, may develop an off-flavour caused by the compound geosmin produced by actinomycetes and a number of blue-green algae. Muddy tastes can result from the animals eating blue-green algae, such as Oscillatoriasp., and other micro-organisms.Fish that are detected to have an off-flavour should be held in flowing water for a period of 7–14 days, during which period the causative chemical is metabolized and the off-flavour removed. In higher temperatures, it takes less time for the fish to lose the off-flavour. Off-flavours can also be caused in fish and molluscs grown in waters contaminated with chemicals from industrial wastes, such as phenols, tars and mineral oils. It is necessary to hold them in clean flowing water for longer periods to remove such flavours.

Because of the preference for live products, live hauling is practised in many areas. Oysters and mussels can fairly easily be transportedalive over long distances in burlap or plastic mesh sacks. Lobsters and crabs, and also to some extent the fresh-water prawn Macro-brachium, are transported live on ice. Livetransport of shrimps is attempted only in countries such as Japan where they are eaten raw. In Japan, shrimps harvested by pond nets are held in cooling tanks for periods of up to about eight hours, depending on the climatic season, to bring the water temperature slowly down to about 12°C. The shrimps become quiescent at that temperature and the body becomes reddish in colour. After the different sized shrimps are sorted, they are packed in card-board boxes between layers of sawdust and transported to the markets. Ice enclosed in polyethylene or ice bags is sometimes placed on top of the layers in the packing box, especially if the transport takes a long time. When unpacked, the shrimps become active again and are displayed for sale. 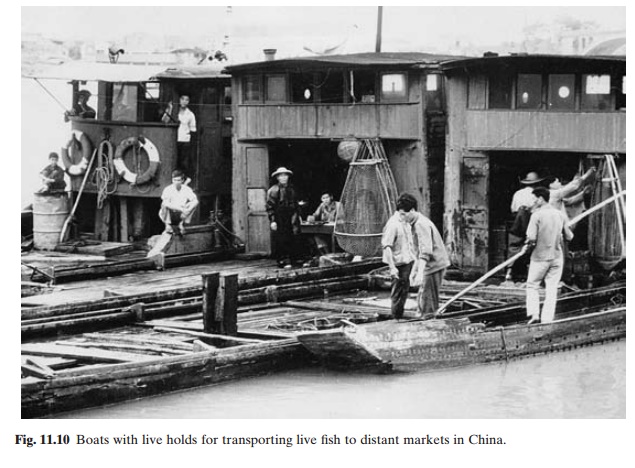 Fish have to be transported in live-haul boats or trucks in water to keep them alive. Large boats with live holds are used in China for transporting carp to distant markets as far away as Hong Kong (fig. 11.10). In Norway, live-haul boats are often used to transport salmon and trout from cage farms to the packing plants. The most common means of transport is special trucks with built-in tanks or trucks suitable for carrying fish tanks. Fish tanks are usually made of fibreglass, canvas or marine plywood. Loading the fish into the tanks may be done manually with special baskets or buckets. When large quantities are involved, a suitable lifting device has to be used. Water in the tank has to be kept in good condition during transport. As fish have to be kept under crowded conditions, it is necessary to aerate the water with mechanical agitators or airstones fed with compressed air or oxygen. Ice may be added to the tank water to reduce water temperature, particularly in summer. Some long-distance hauling trucks

have more complicated designs, with facilities for filtration, oxygenation, refrigeration and recirculation of water, but these are obviously more costly to buy and maintain. A major problem in live haulage of fish is the oscillation of water in the tanks, which may cause damage to the animals and make driving of the truck difficult. So large tanks are generally provided with baffles or are divided into compartments to reduce oscillation.