Other methods of fishing - Harvesting methods in Aquaculture

As mentioned earlier, the habits of certain species like the milkfish and mullets of swimming against currents is made use of in harvesting them.

Other methods of fishing

As mentioned earlier, the habits of certain species like the milkfish and mullets of swimming against currents is made use of in harvesting them. Even in farms without any special catching ponds, as in old traditional Indonesian tambaks, it is fairly easy to concentrate the fish near the sluice gates at high tides, from where they can be caught by means of cast nets. In large ponds, a number of fishermen may have to be employed. The main disadvantage of this type of fishing is that a large number of fish are damaged and lose scales during removal from the net. Dip nets can also be used, even though they may not be so efficient. In milkfish ponds in Taiwan, gill nets are used for harvesting.

Several pieces of netting, each of length 30m and height about 1.6m are joined together and towed across the pond. Before harvesting, the fish are scared in order to empty their stomachs. This is achieved by dragging a scareline (a rope strung with a number of bamboo pieces) or by striking the water with bamboo poles from a raft or boat. Fish with empty stomachs normally reach the markets in a better condition.

In the traditional valli culture in lagoons in Italy and other Mediterranean countries, the special trapping devices called lavorieri serve the purpose of partial or sometimes even complete harvesting. Originally they consisted of screens made of reeds, installed in such a way as to lead fish into a terminal trapping chamber.

In modern vallis, aluminium or other metallic screens and traps are built on concrete barrages at the inlet. Fish swim against the current at high tide and are caught in the traps. Gill nets and seines are also used for fishing from the lagoon proper.

For partial harvesting of shrimp ponds, barrier traps made of bamboo screens are used in Southeast Asia, but they have the disadvantage that many of them do not have a bottom screen, which makes removal of the shrimp from the trap inconvenient. Also it is rather difficult to adjust the size of the mouth opening. Fyke-type shrimp traps with builtin bottoms that can be easily handled for removing shrimps are much more efficient (fig. 11.6). The mesh size of the trap, or the distance between bamboo slats (if made of bamboo), should be such that small shrimps can escape. The mouth of the trap should be adequately protected to prevent crabs from entering the trap. If operated at night with a lamp hung above to attract the shrimps, appreciable catches can be obtained. If the catches are heavy it is necessary to empty the trap periodically. Besides traps, cast nets, lift nets and seines can also be used for partial harvesting, in conjunction with lure lights at night. 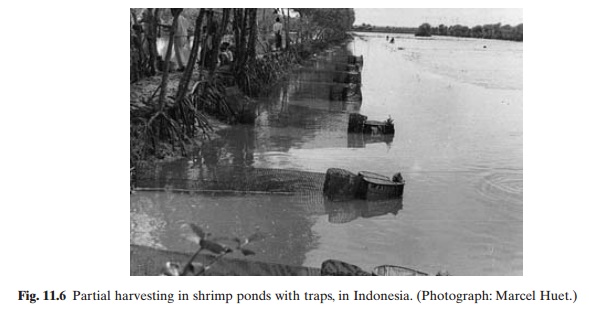 In shrimp farms in Japan, harvesting is often done with pound nets. Each net consists of three or more conical net bags set in a semicircle, with a net fence set at a right angle to the shore. The bag nets are laced together with side nets. Shrimps swim along the fence into the pond and get caught in the bag nets. Hand-held electric equipment is reported to be used for harvesting shrimp in Taiwan (ASEAN, 1978) (see fig. 24.15). It consists of an accumulator and two bamboo poles. One of the poles is equipped with a metal tip and the other has a steel ring with a net attached. The metal tip is connected by wires to the anode of the accumulator and the steel ring to the cathode. The accumulator is carried in a backpack or on a small raft and the operator holds one pole in each hand as he wades through the ponds. When the gear is switched on, an electric field is formed between the two poles. The shrimps jump when exposed to the electric stimulation and are caught in the net. Total harvesting of large shrimp ponds is said to be achieved by this method in Taiwan.

In multiple stocking and harvesting systems, the ponds will contain different sized groups of animals and therefore special care has to be taken to return to the pond any undersized ones caught in the net. The selection of an appropriate mesh size goes a long way towards preventing the capture of undersized animals.

It may, however, be necessary to perform additional sorting (fig. 11.7). Besides hand sorting, special floating graders can be used, which are usually made of wooden or metal slats set at appropriate distances apart to retain animals above a certain size and allow smaller individuals to fall through. 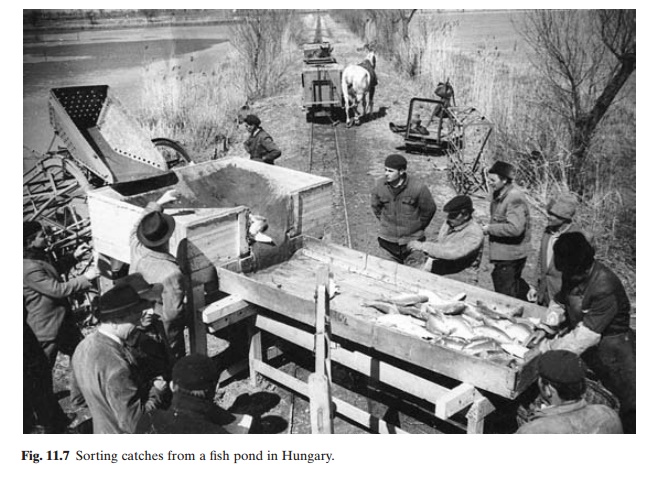