A fixed beam AB of length 6m carries point load of 160 kN and 120 kN at a distance of 2m and 4m  from the left end A. Find the fixed end moments and the reactions at the supports. Draw B.M and  S.F diagrams. 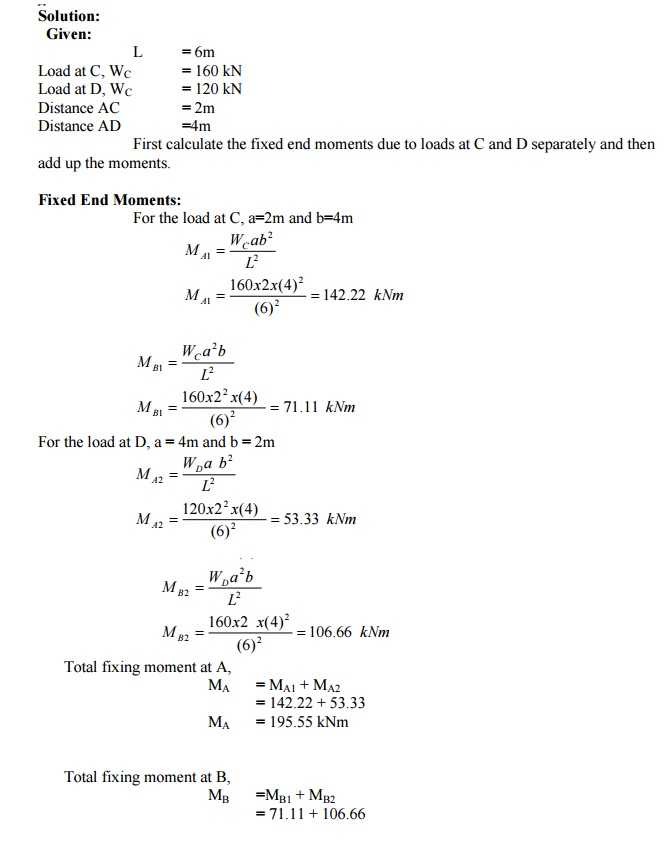 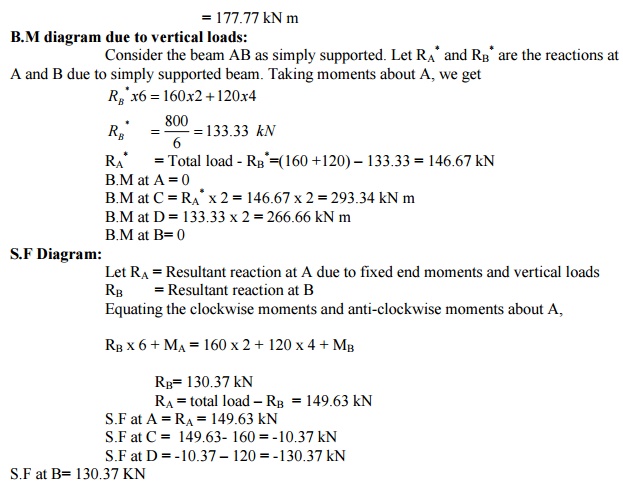 A fixed beam AB of length 6m carries two point loads of 30 kN each at a distance of 2m  from the both ends. Determine the fixed end moments and draw the B.M diagram. 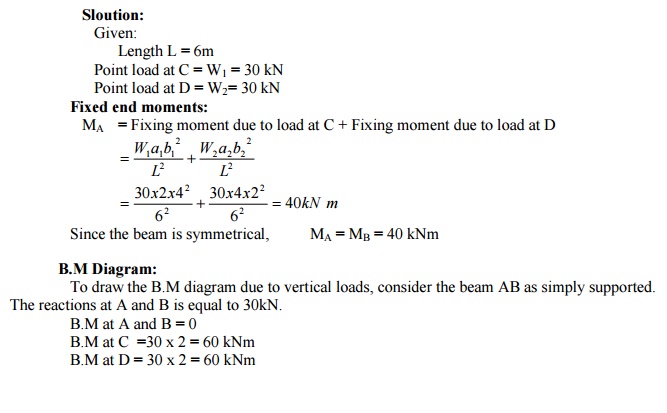 Find the fixing moments and support reactions of a fixed beam AB of length 6m, carrying a uniformly  distributed load of 4kN/m over the left half of the span. 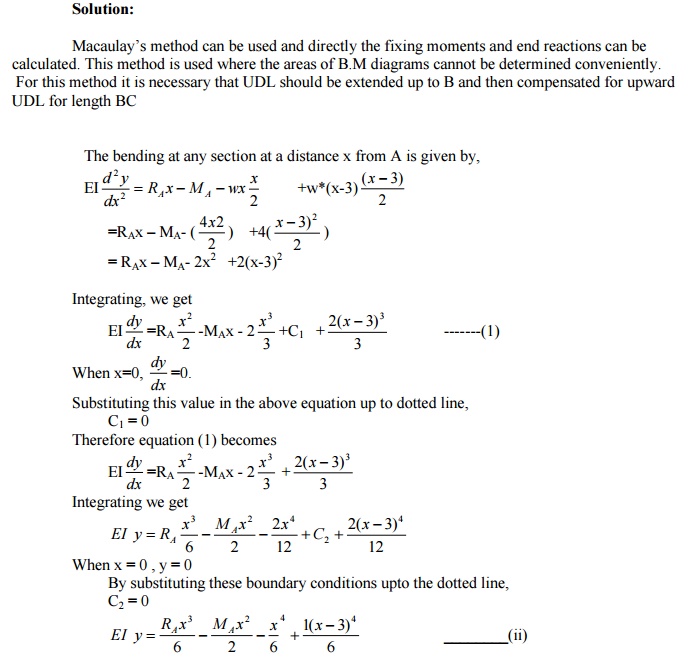 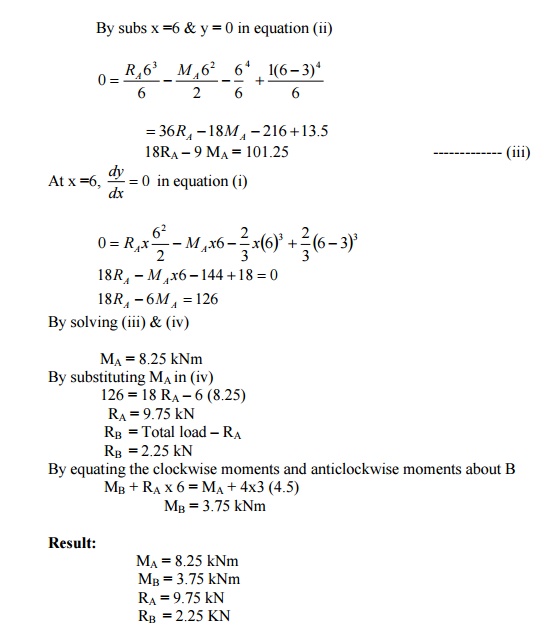 What are the fixed end moments for a fixed beam of length 'L  load 'w' at a distance 'a' from left end? 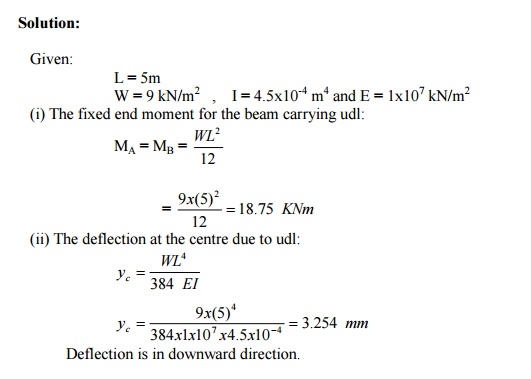 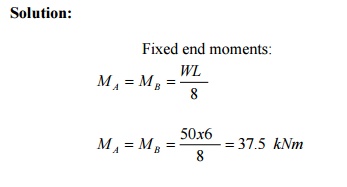 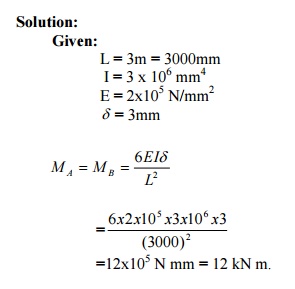 A fixed beam AB, 3m long is carrying a point load of 45 kN at a distance of 2m from A. If  the flexural rigidity (i.e) EI of the beam is 1x104kNm2. Determine (i) Deflection under the Load. 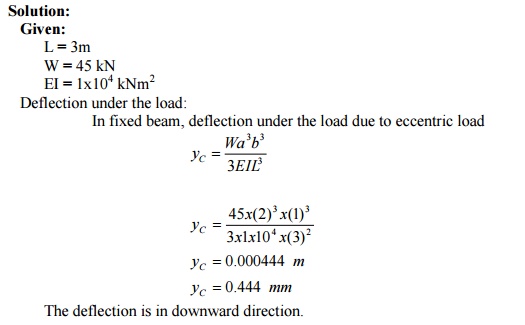 A fixed beam of 5m span carries a gradually varying load from zero at end A to 10 kN/m at  end B. Find the fixing moment and reaction at the fixed ends. 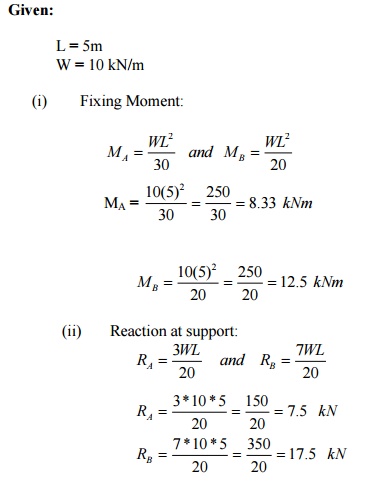 A continuous beam ABC covers two consecutive span AB and BC of lengths 4m and 6m,  carrying uniformly distributed loads of 6kN/m and 10kN/m respectively. If the ends A and  C are simply supported, find the support moments at A,B and C. draw also B.M.D and S.F.D. 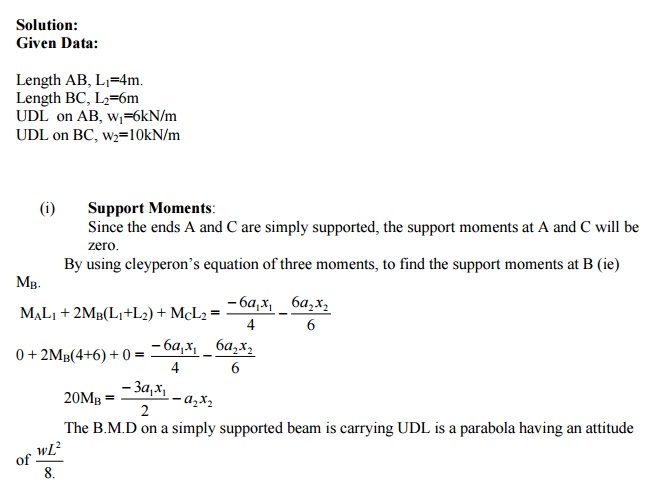 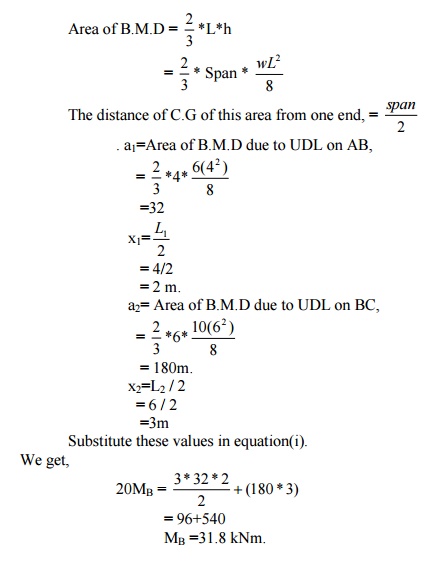 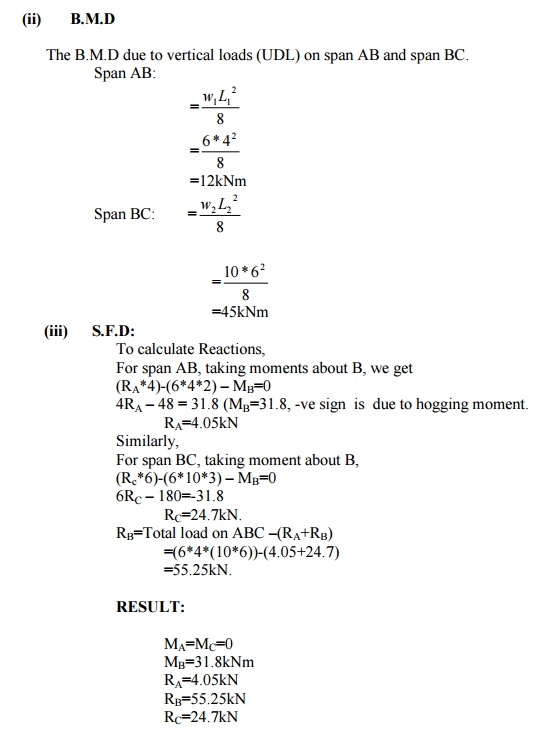 A continuous beam ABCD of length 15m rests on four supports covering 3 equal spans and carries  a uniformly distributed load of 1.5 kN/m length .Calculate the moments and reactions at the  supports. Draw The S.F.D and B.M.D. 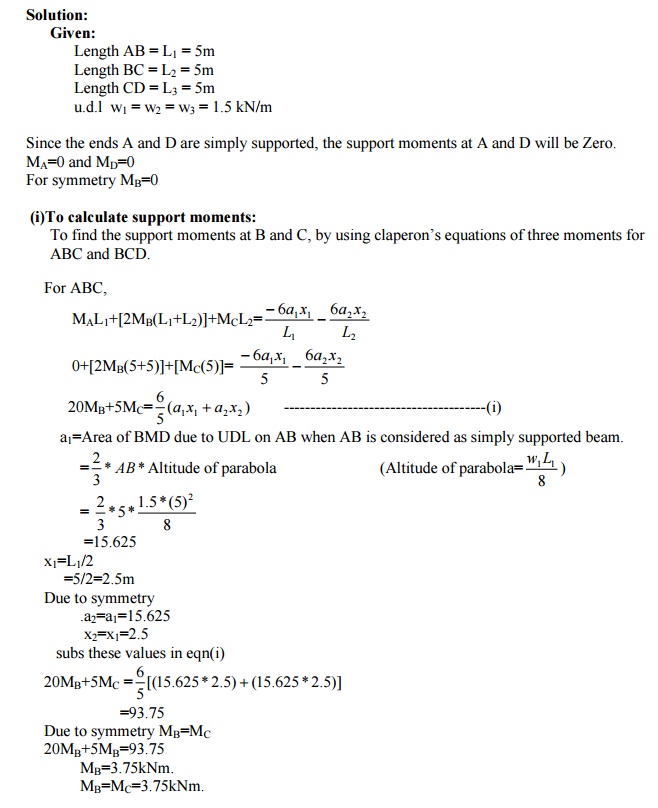 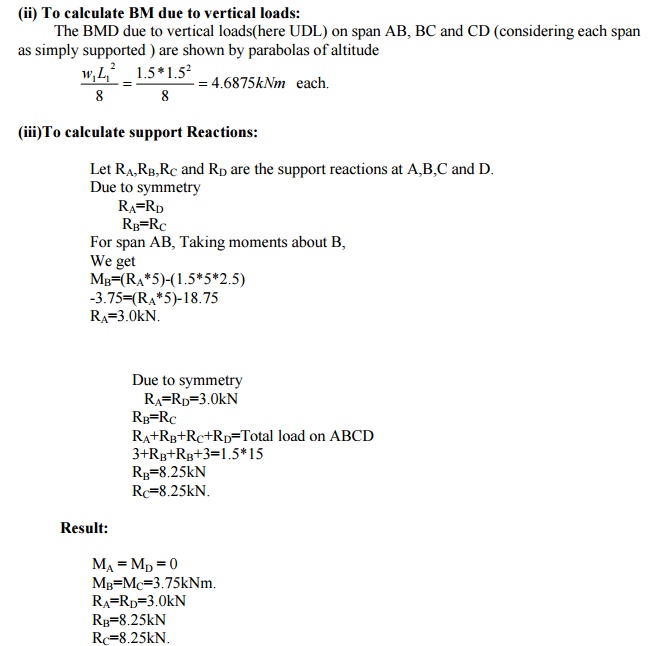 A continuous beam ABCD, simply supported at A,B, C and D is loaded as shown in fig.

Find the moments over the beam and draw B.M.D and S.F.D. 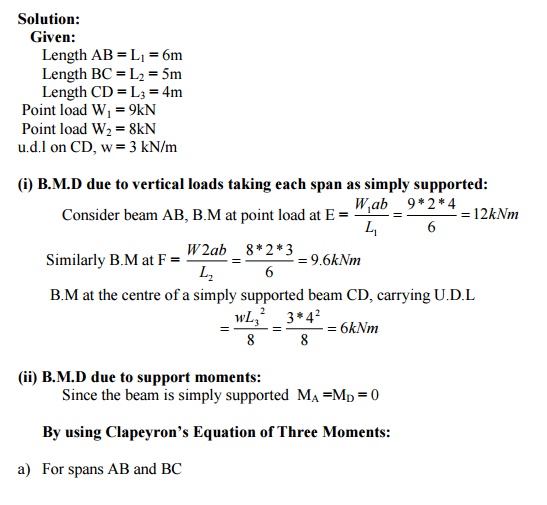 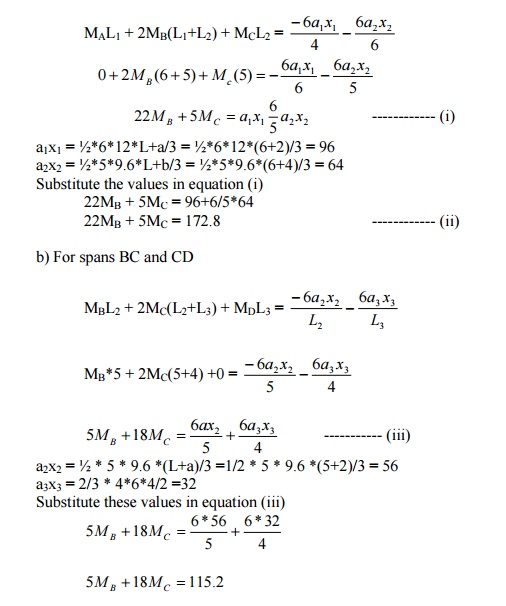 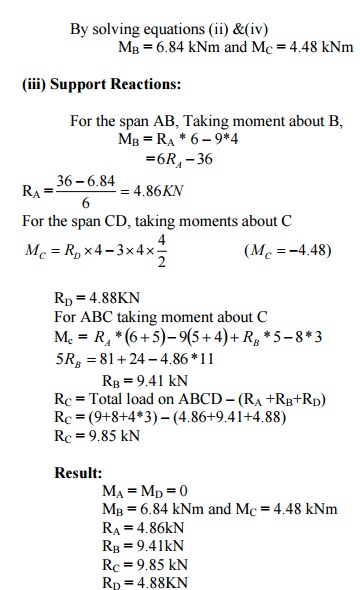 (ii) B.M.D due to support moments:

Since the beam is simply supported MA =MD = 0

Using the theorem of three moments draw the shear force and bending moment diagrams  for the following continuous beam. 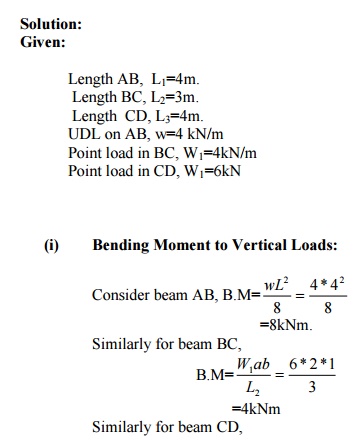 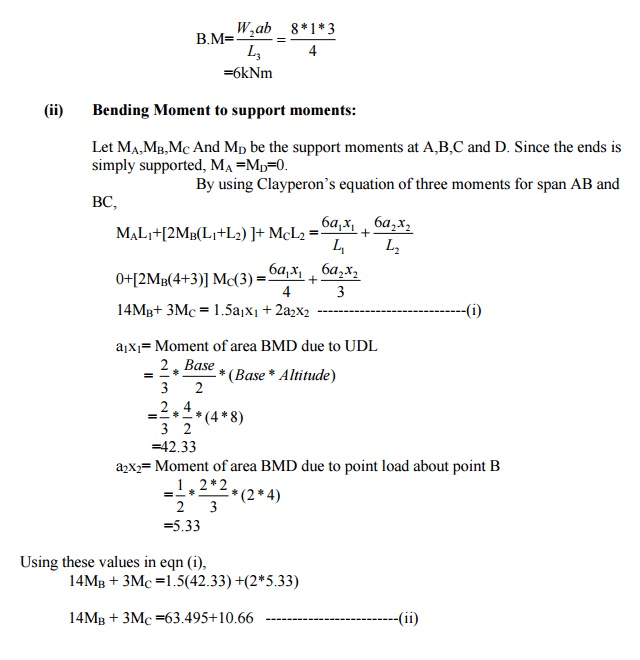 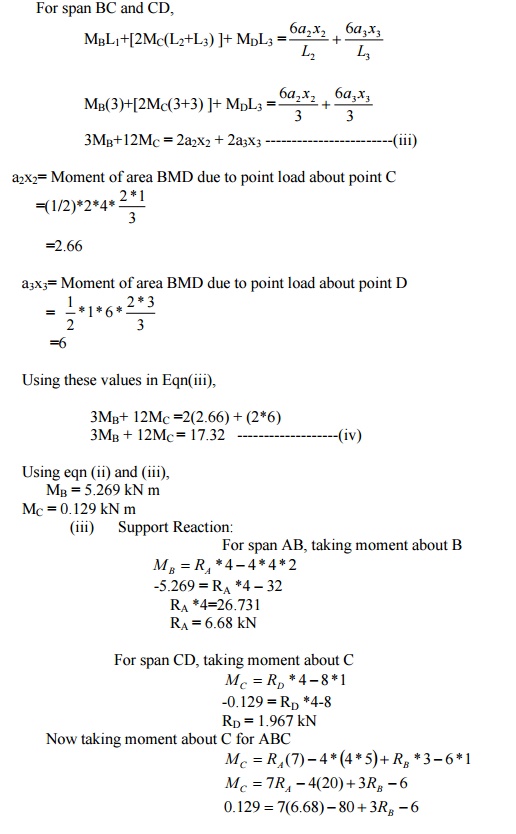 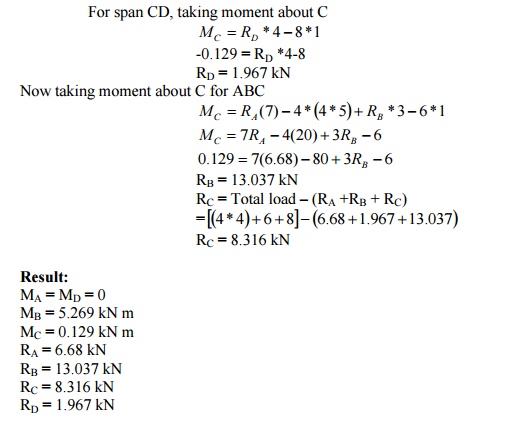 A beam AB of 4m span is simply supported at the ends and is loaded as shown in fig.

Determine (i) Deflection at C (ii) Maximum deflection (iii) Slope at the end A. 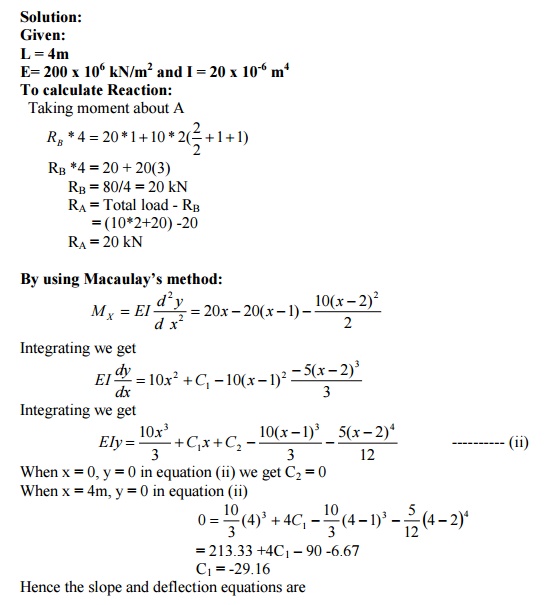 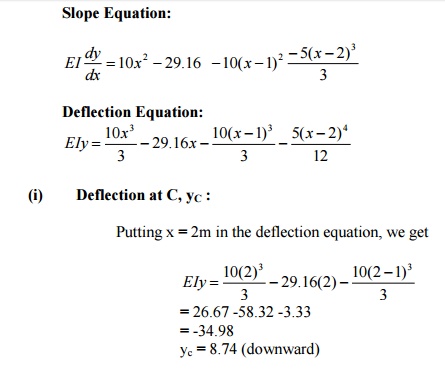 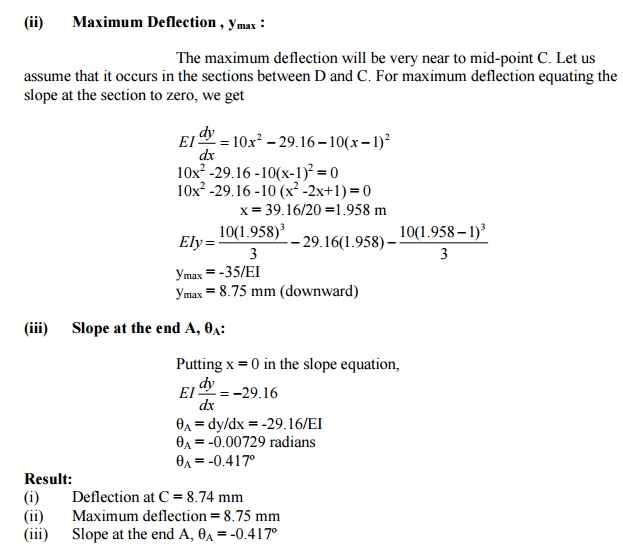 9. A continuous beam is shown in fig. Draw the BMD indicating salient points. 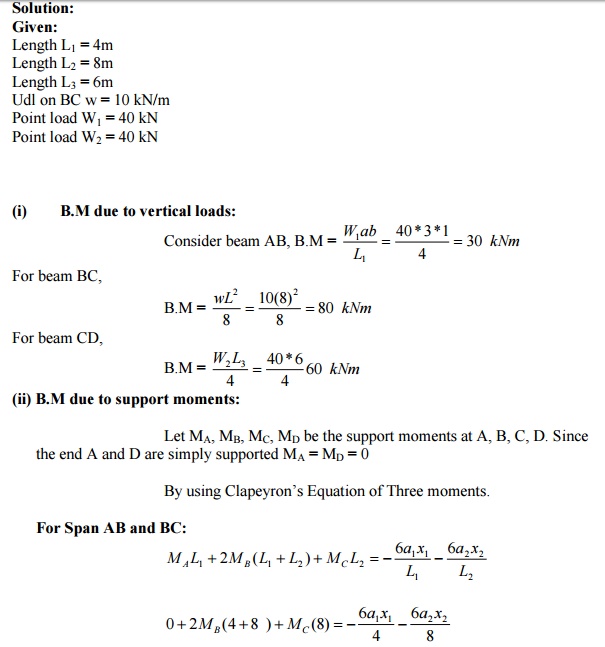 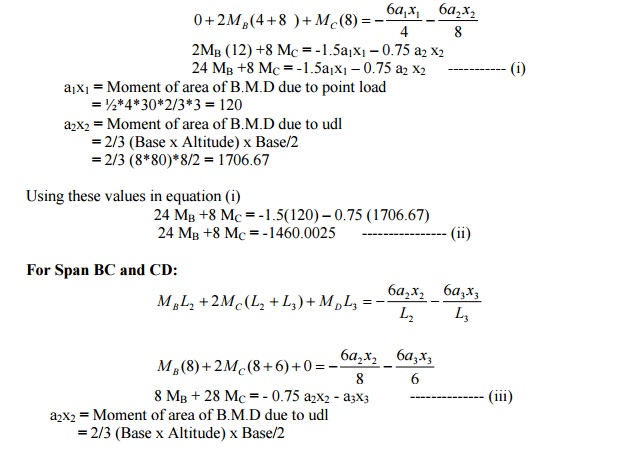 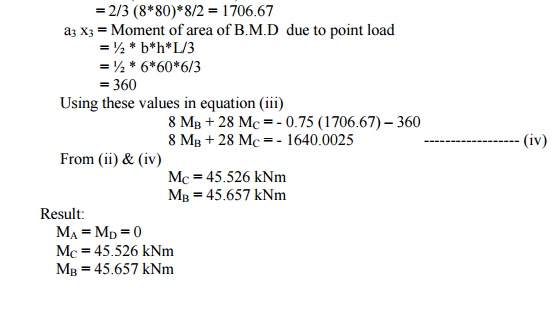 10. A cantilever beam AB of span 6m is fixed at A and propped at B. The beam carries a udl of  2kN/m over its whole length. Find the reaction at propped end. 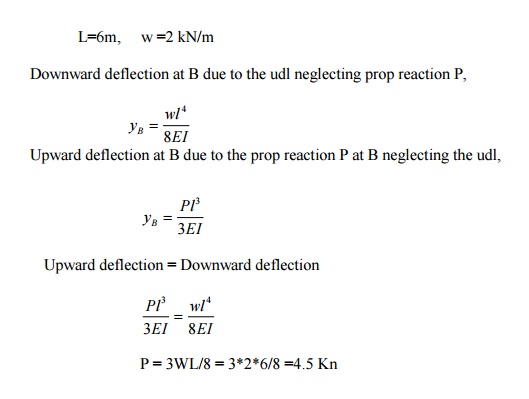