Solution of Equations and Eigenvalue Problems

SOLUTION OF EQUATIONS AND EIGENVALUE PROBLEMS

4 Eigen Value of a Matrix

The problem of solving the equation is of great importance in science and Engineering.

In this section, we deal with the various methods which give a solution for the equation

Solution of Algebraic and transcendental equations

Methods for solving the equation

In bisection method the interval is always divided into half. If a function changes sign over an interval, the function value at the mid-point is evaluated. In bisection method the interval from a to b into equal intervals ,no account is taken of the magnitude of .An alternative method that exploits this graphical insights is to join by a straight line.The intersection of this line with the X-axis represents an improved estimate of the root.The replacement of the curve by a straight line gives a “ the origin of the name ,method of false position ,or in Latin ,Regula falsi .It is also called the linear interpolation method.

1. Find a real root of that lies between 2 and 3 by the method of false position and correct

The approximations are given by

Taking logarithmic on both sides,

The approximation are given by

1. Determine the real root of correct to four decimal places by Regula-Falsi method.

2. Find the positive real root of correct to four decimals by the method of False position .

The error at any stage is proportional to the square of the error in the previous stage. 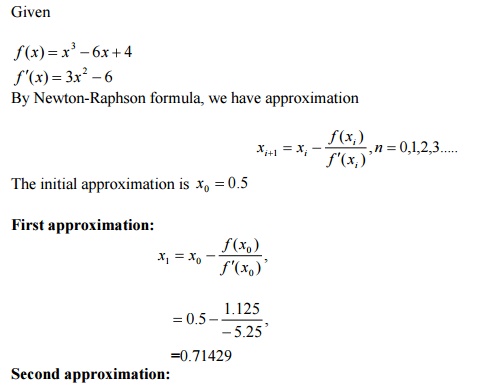 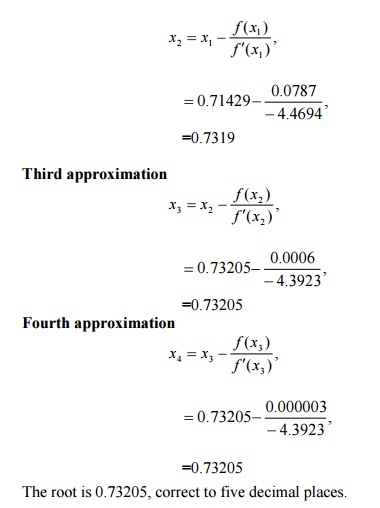 By Newton-Raphson formula, we have approximation

The initial approximation is x0 = 0.5

By Newton-Raphson formula, we have approximation 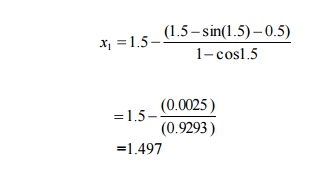 2.Use Newton-Raphson method to solve the equation

For solving the equation f (x) = 0 by iteration method, we start with an approximation value of the root.The equation  f (x)

The order of convergence

The order of convergence in general is linear (i.e) =1 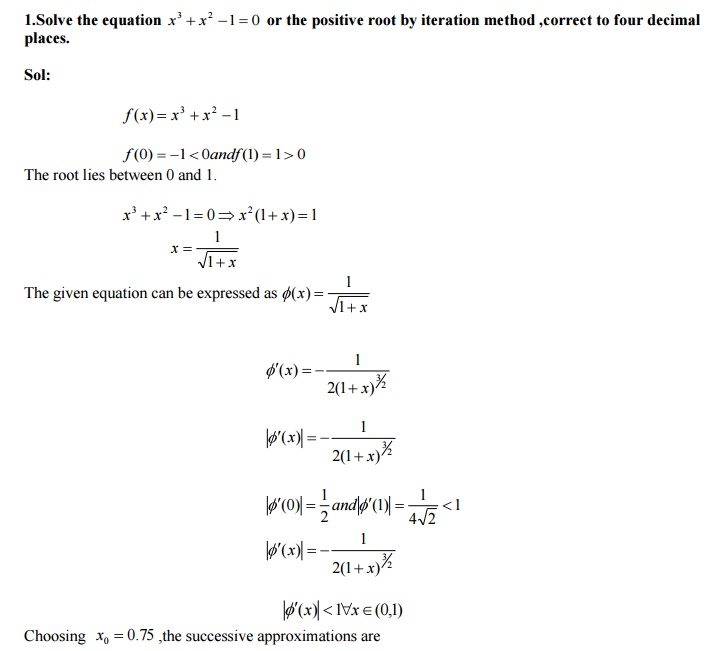 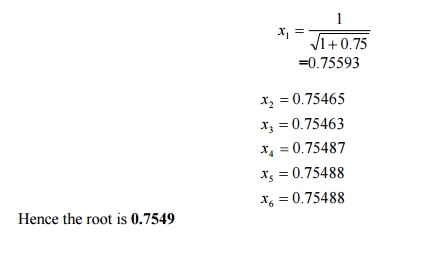 1. Find the cube root of 15, correct to four decimal places, by iteration method

(a) Direct methods are those in which

The amount of computation involved can be specified in advance.

The method is independent of the accuracy desired.

(b) Iterative methods (self correcting methods) are which

Begin with an approximate solution and

Obtain an improved solution with each step of iteration

The accuracy of the solution depends on the number of iterations performed.

The system of equation can be solved by using determinants (Cramer’s rule) or by means of matrices.

These involve tedious calculations. These are other methods to solve such equations .In this chapter we will discuss four methods viz.

This is an Elimination method and it reduces the given system of equation to an equivalent upper triangular system which can be solved by Back substitution.

Consider the system of equations

From third equation x3  is known. Using x3 in the second equation x2  is obtained. using both x2 And x3  in the first equation, the value of x1 is obtained.

Thus the elimination method, we start with the augmented matrix (A/B) of the given system and transform it to (U/K) by eliminatory row operations. Finally the solution is obtained by back substitution process.

This method is a modification of Gauss-Elimination method. Here the elimination of unknowns is performed not only in the equations below but also in the equations above. The co-efficient matrix A of the system AX=B is reduced into a diagonal or a unit matrix and the solution is obtained directly without back substitution process. 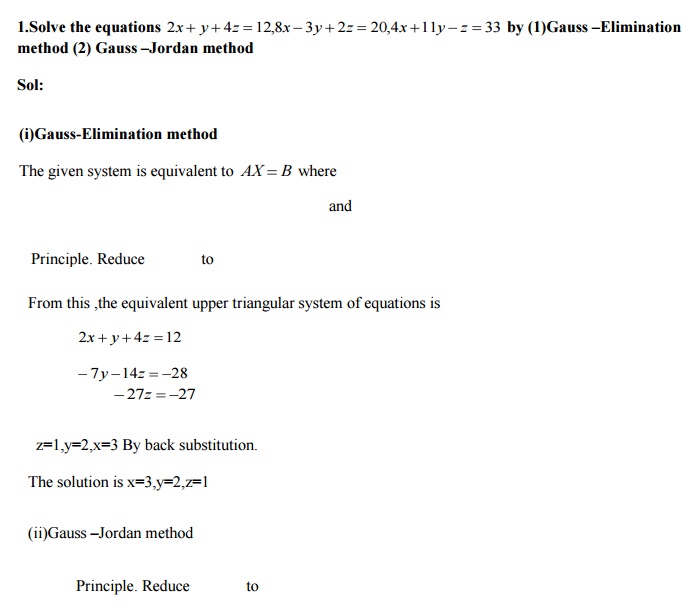 Solving the given system for x,y,z (whose diagonals are the largest values),we have 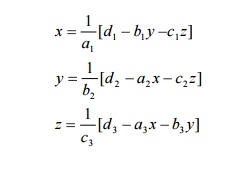 The iteration is stopped when the values x, y, z start repeating with the desired degree of accuracy.

This method is only a refinement of Gauss-Jacobi method .In this method ,once a new value for a unknown is found ,it is used immediately for computing the new values of the unknowns.

If the rth iterates are, then the iteration scheme for this method is

Hence finding the values of the unknowns, we use the latest available values on the R.H.S The process of iteration is continued until the convergence is obtained with desired accuracy.

This is the sufficient condition for convergence of both Gauss-Jacobi and Gauss-seidel iteration methods. 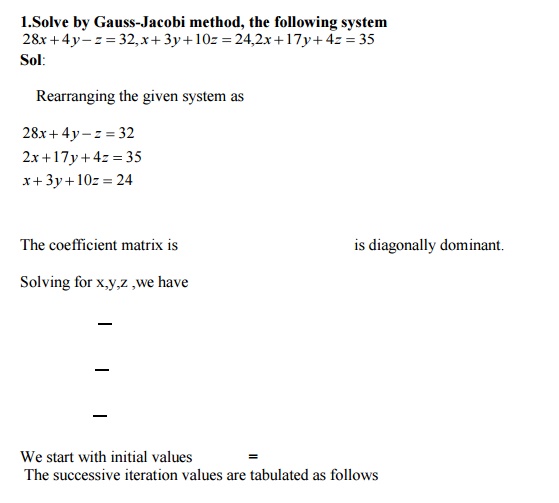 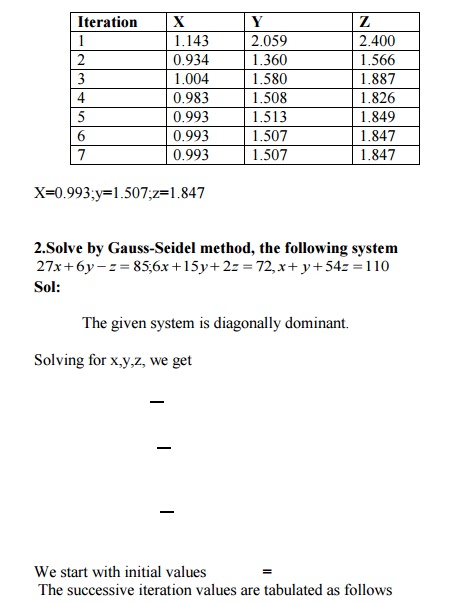 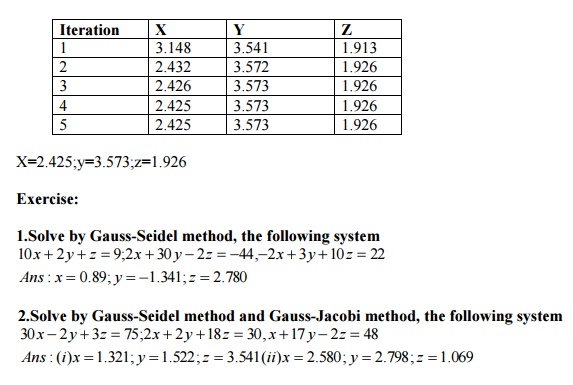 By Gauss Jordan method, the inverse matrix X is obtained by the following steps:

Step 2:        Reduce the matrix A in to the identity matrix I by employing row transformations.

Finally write the inverse matrix A-1.so the principle involved for finding A-1 is as shown below

The answer can be checked using the result

1.Find the inverse of by Gauss-Jordan method.

4 Eigen value of a Matrix

1.Use the power method to find the dominant value and the corresponding Eigen vector of the matrix

Hence the dominant Eigen value is 15.97 and the corresponding Eigen vector is 2.

1. Find the dominant Eigen value and the corresponding Eigen vector of A Find also the other two Eigen values.

2. Find the dominant Eigen value of the corresponding Eigen vector of By power method. Hence find the other Eigen value also. 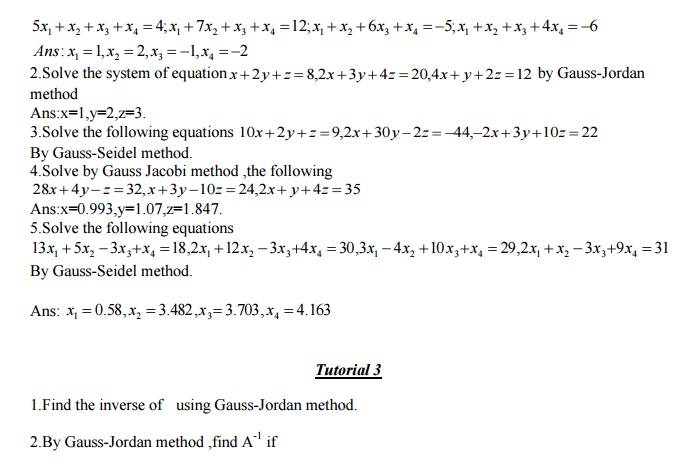 5.Find the dominant Eigen value and the corresponding Eigen vector of by power method. Hence find the other Eigen value also . Ans:λ=2.381