Complex integration is an intuitive extension of real integration. Since a complex number represents a point on a plane while a real number is a number on the real line, the analog of a single real integral in the complex domain is always a path integral. For some special functions and domains, the integration is path independent, but this should not be taken to be the case in general. Given the sensitivity of the path taken for a given integral and its result, parametrization is often the most convenient way to evaluate such integrals.Complex variable techniques have been used in a wide variety of areas of engineering. This has been particularly true in areas such as electromagnetic eld theory, uid dynamics, aerodynamics and elasticity.

A connected region is one which any two points in it can be connected by a curve which lies entirely with in the region.

An integral along a simple closed curve is called a contour integral.

If f(z) is analytic inside and on a closed curve c of a simply connected region R and if a is any point with in c, then

the integration around c being taken in the positive direction.

If a function f(z) is analytic within and on a simple closed curve c and a is any point lying in it, then 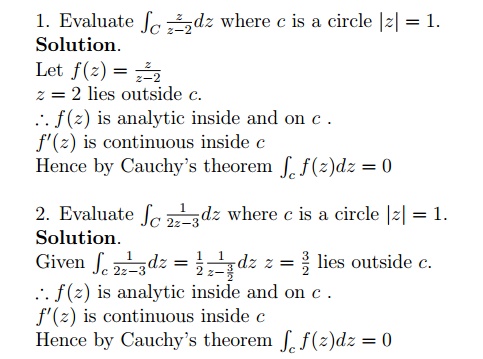 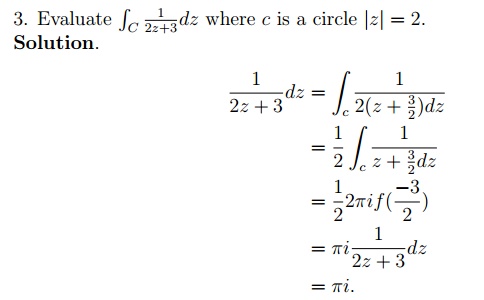 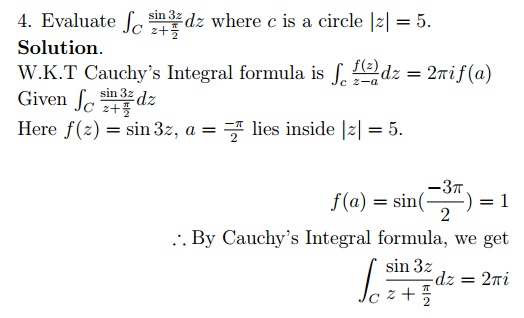 A function f(z), analytic inside a circle C with center at a, can be expanded in the series 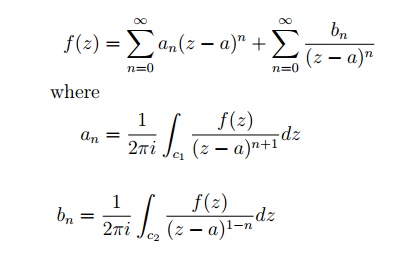 where the integrals being taken anticlockwise. 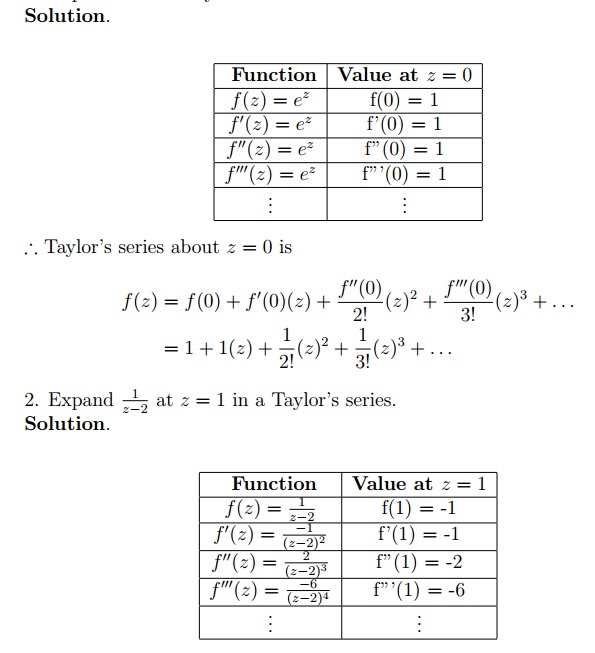 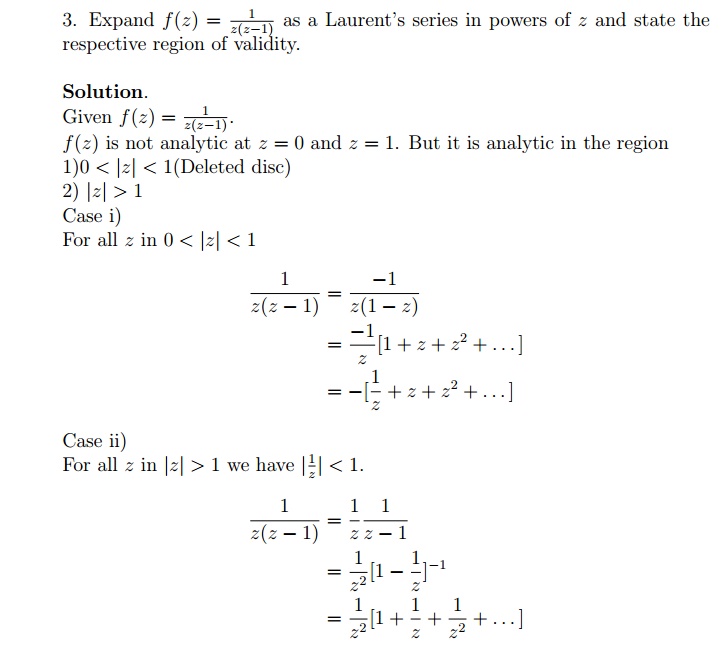 A point z = z0 at which a function f(z) fails to be analytic is called a singular point.

A function f(z) which is analytic everywhere in the nite plane is called an entire funcction.

A function f(z) which is analytic everywhere in the nite plane except at nite number of poles is called a meromorphic function.

2.  There exist a neighbourhood of z = z0 containing no other singularity.

If the principal part of f(z) in Laurent series expansion of f(z) about the point z0 is zero then the point z = z0 is called removable singularity.

If the principal part of f(z) in Laurent series expansion of f(z) about the point z0 contains in nite number of non zero terms then the point z = z0 is called essential singularity. 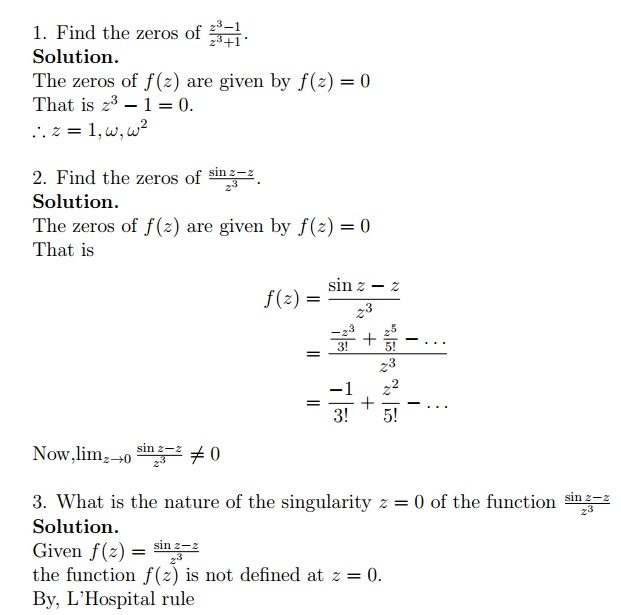 Since the limit exist and is  nite, the singularity at z = 0 is a removable     singularity. 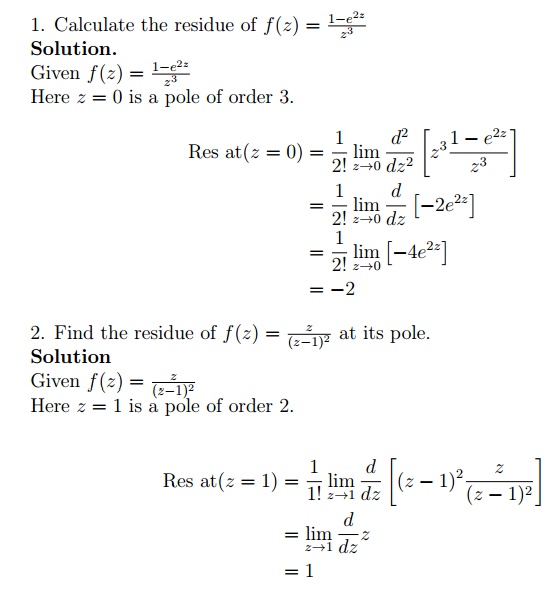 If f(z) be analytic at all points inside and on a simple closed curve c, 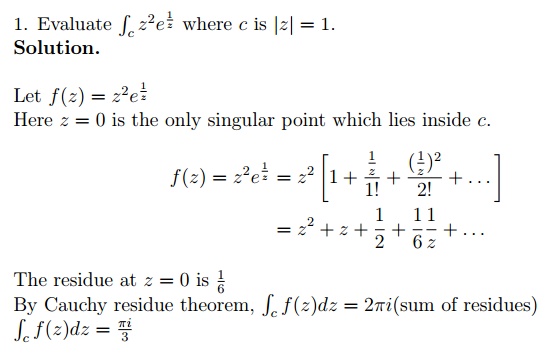 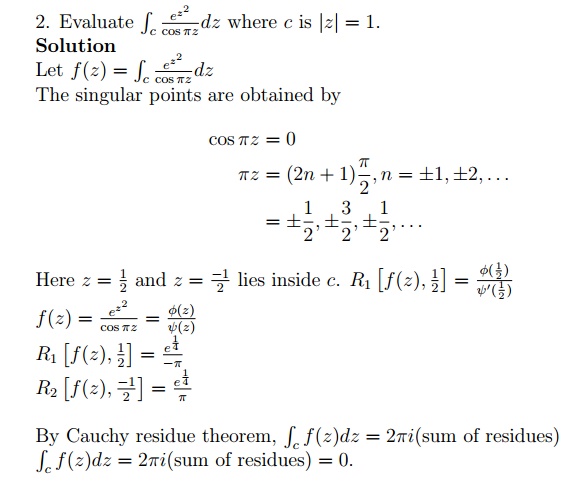 The complex integration along the scro curve used in evaluating the de nite integral is called contour integration. Here we are going to see under three types. They are 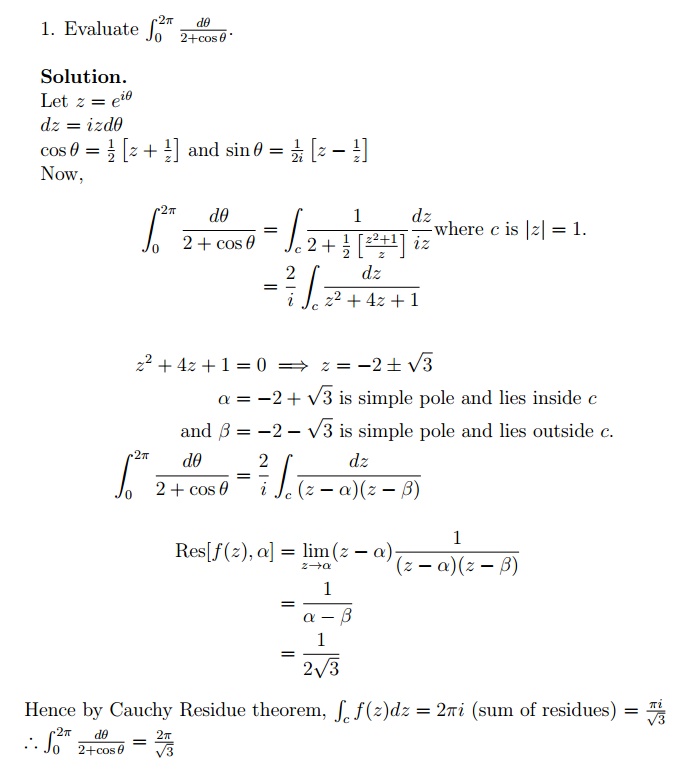 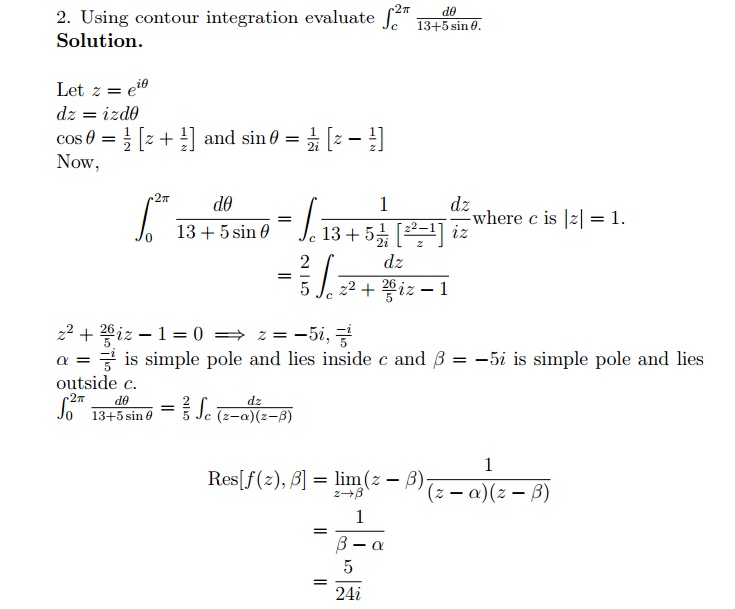 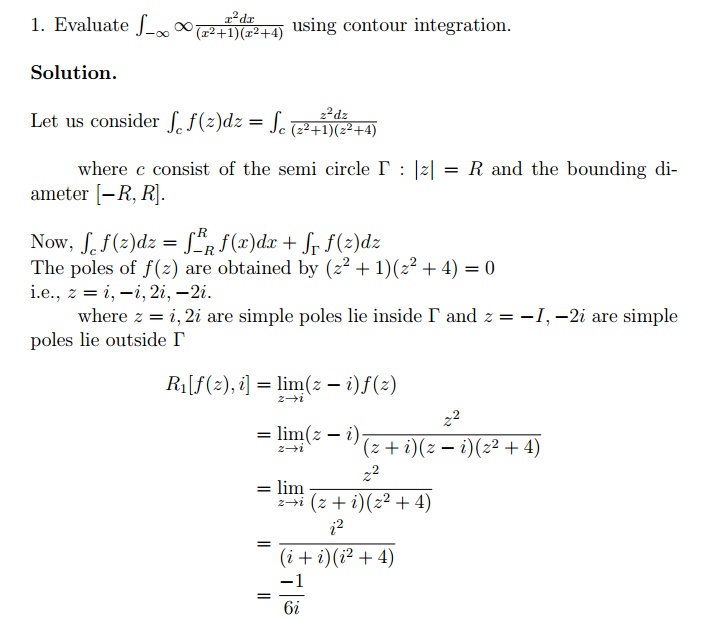 where c consist of the semi circle : jzj = R and the bounding di-ameter [ R; R]. 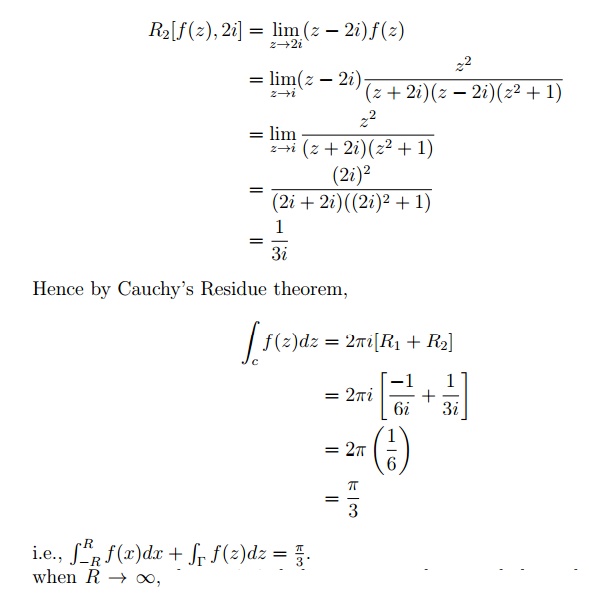 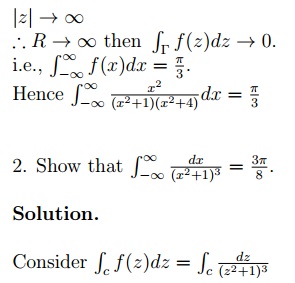 where c is the upper half of the semi circle  T with the bounding diam eter [  R; R]. 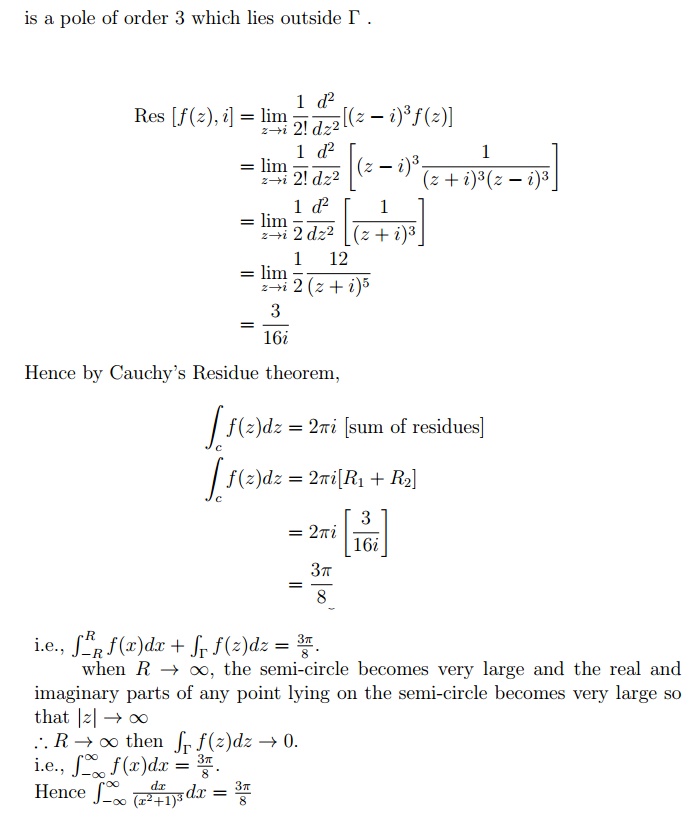 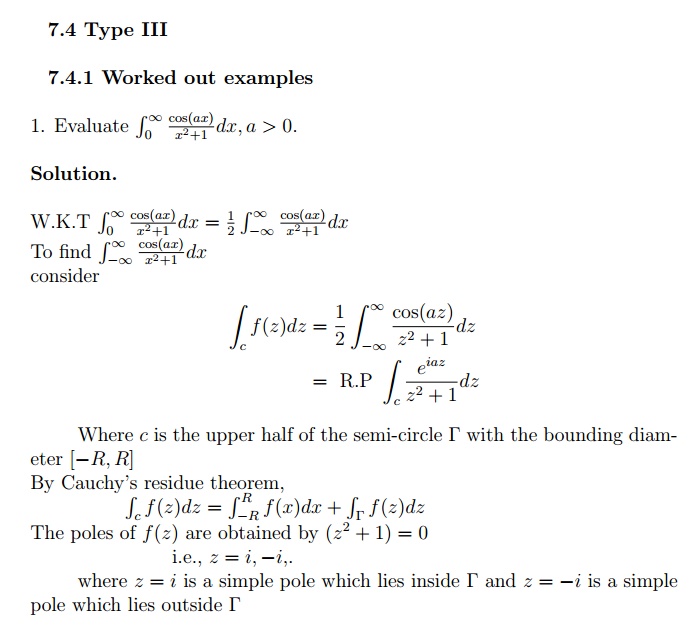 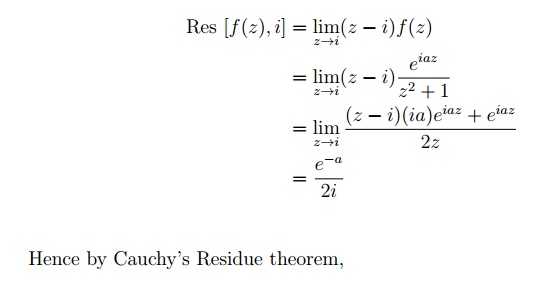 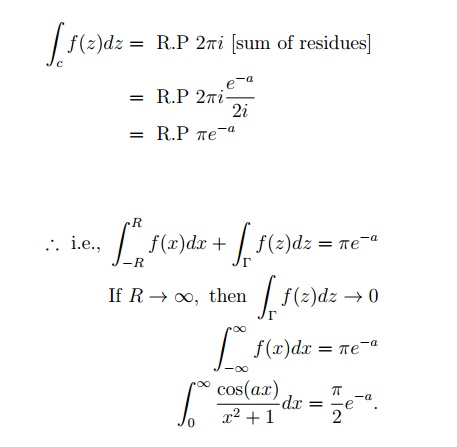 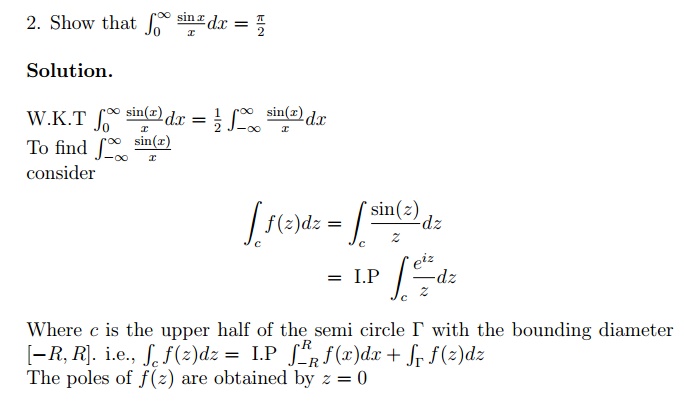 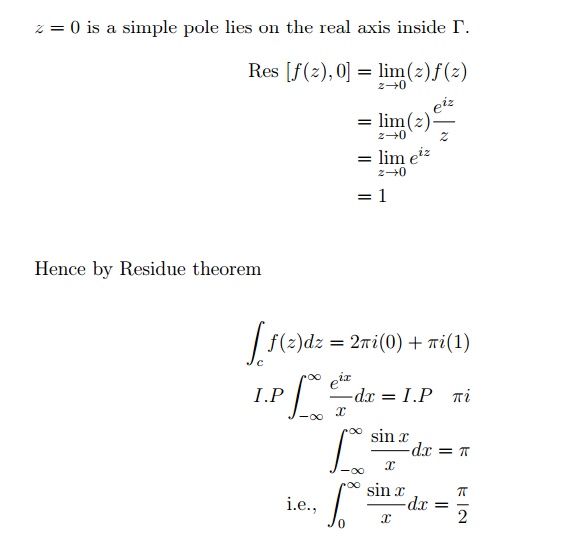 The following gure shows a cross-section of a cylinder (not necessarily cir-cular), whose boundary is C,placed in a steady non-viscous ow of an ideal uid; the ow takes place in planes parallel to the xy plane. The cylinder is out of the plane of the paper. The ow of the uid exerts forces and turning moments upon the cylinder. Let X, Y be the components, in the x and y directions respectively, of the force on the cylinder and let M be the anticlockwise moment (on the cylinder) about the origin. 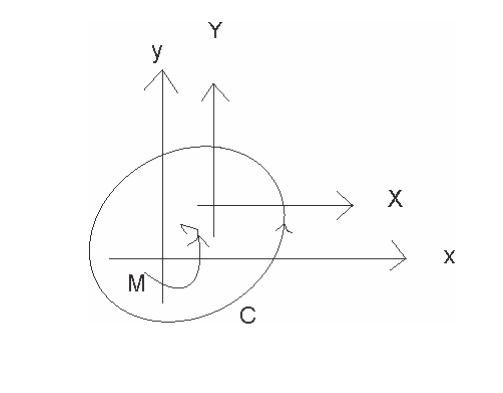 where Re denotes the real part, is the (constant) density of the uid and w = u + iv is the complex potential for the ow both of which are presumed known. We shall nd X; Y and M if the cylinder has a circular cross-section and the boundary is speci ed by jzj = a: Let the ow be a uniform stream with speed U:

Now, using a standard result, the complex potential describing this situation is:

Again using the Key Point above this leads to 4 a2U2i and this has zero real part. Hence M = 0, also. The implication is that no net force or moment acts on the cylinder. This is not so in practice. The discrepancy arises from neglecting the viscosity of the uid. 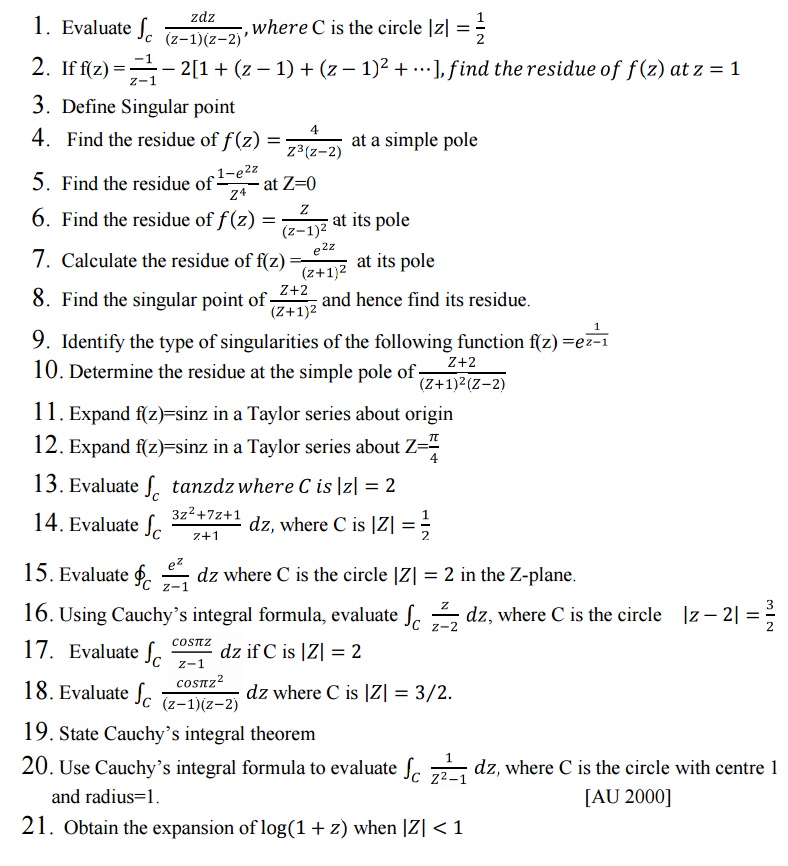 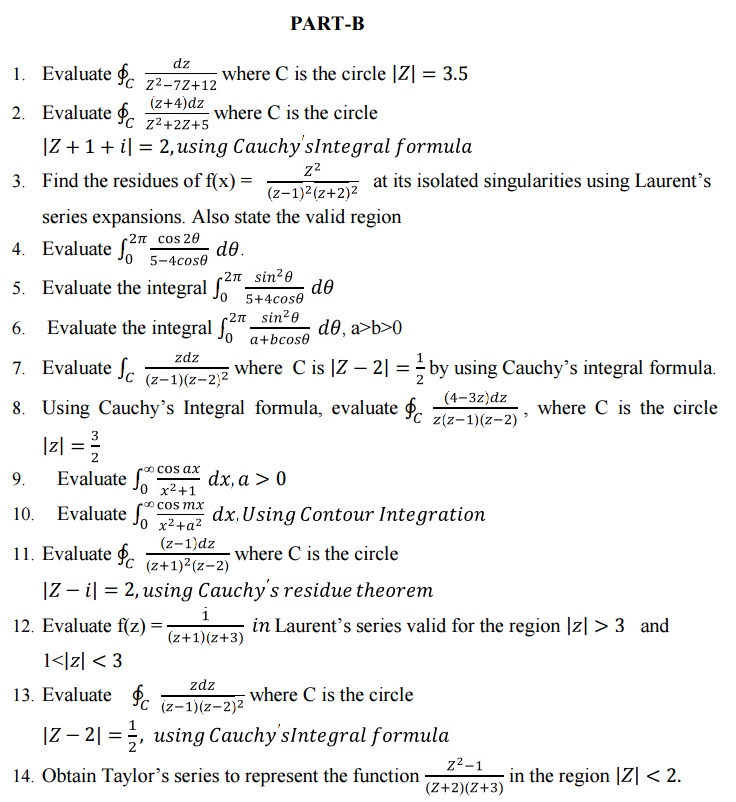 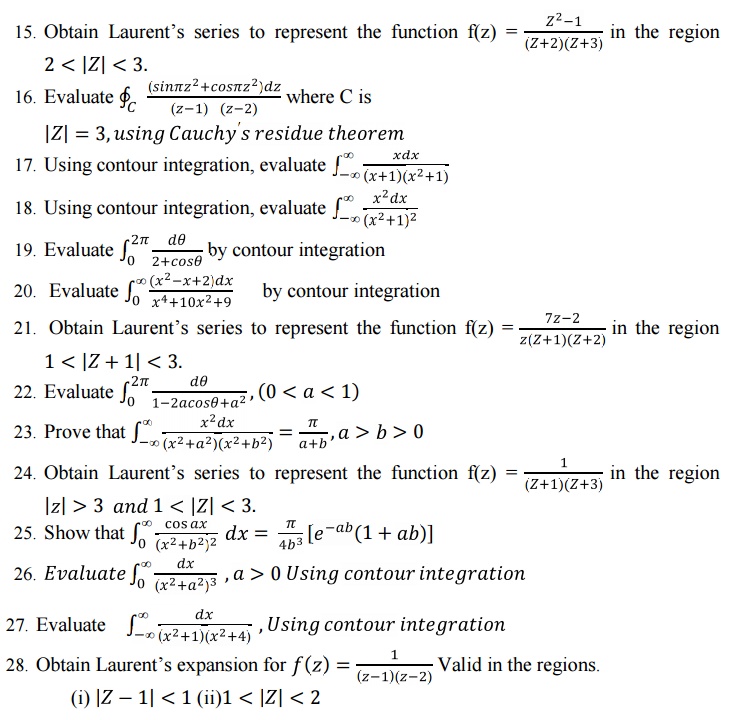