In the single phase half controlled rectifier, the load resister, RL is connected in series with anode A.

A variable resistance r is inserted in the gate circuit for controlling gate current. During the negative half cycles of the input ac voltage .

The SCR does not conduct regardless of the gate voltage, because anode is negative with respect to cathode K.

The SCR will conduct during the positive half cycles provided appropriate gate current is made to flow .the gate current can be varied with the help of variable resistance r inserted in the gate circuit for this purpose .the greater the gate current, the lesser will be the supply voltage at which SCR will start conducting.

Assume that the gate current is such that SCR starts conducting at a positive voltage V, being less than peak value of input ac voltage Vmax,

The angle by which the SCR starts conducting is called as firing angle or delay angle a the conduction will take place for( P -a ) radians. 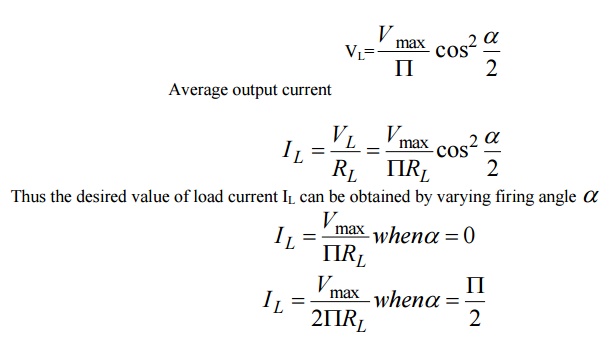 Hence, load current decreases with the increase in value of firing anglea . So the terminal voltage decreases the motor run slowly and vice versa.

Let RL load is connected with the single-phase half controlled rectifier .Due to the inductive nature of the load, the load current lags by an angle qwith respect to the voltage.

During voltage reversal, the voltage reaches zero but due to the inductive nature of the load, the current still flow through the thyristor.

it takes some time for the current to reach zero. so during that instant ,a negative voltage will be appearing across the inductive load and the freewheeling diode connected in parallel with the load is turned on, as the diode is turned on, the load voltage becomes the diode forward drop.

It is otherwise called commutating diode. This diode is connected anti parallel with load .this diode comes into picture only when the load is inductive.

In case of inductive load even though the input voltage reaches zero and becomes negative, the current is still flowing through the thyristor, so it remains on when the voltage across the load becomes negative.

The freewheeling diode is turned on when the load voltage is negative.

So, the voltage across the load becomes zero and it provides a path for the load current. During this interval, the energy stored in the inductor is dissipated through this diode

It improves the input power factor.

The gates of both thyristors are supplied from two gate control supply circuits.

Now, if the supply voltage v =Vmaxsin w t and firing angle is a ,then average output voltage is given by 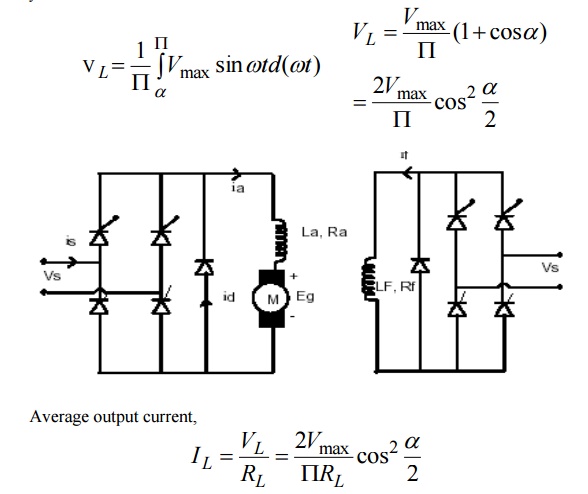 Basic operation is simple and reliable

The overload capacity is lower

Due to switching of SCR distortion of the AC supply voltage and telephone interference may be produced.

Fixed DC voltage is fed to the DC chopper circuit.

This variable DC Voltage is fed to the motor.

By varying the DC voltage, the motor speed can be controlled.

Self commutated devices such as MOSFET‟s, Power transistors, IGBT‟s and IGCT‟s are used for building choppers because they can be commutated by a low power control signal and do not need commutation circuit and can be operated at a higher frequency for the same rating.