The difference between a State and a Nation must first be examined.

The difference between a State and a Nation must first be examined.

The State: A State exists where there is a territory, a people, a government and sovereignty, it may lack the feeling of nationality or of oneness among the people and yet remain a State. The sense of belonging together creates a readiness on the part of the members of a State to subordinate their differences to the common good.

The Nation: The word nation comes from the Latin and when first coined clearly conveyed the idea of common blood ties. It was derived the past participle of the verb nasci meaning to be born, and hence the Latin noun nationem connoting breed or race. The term ‘nation’ emphasises the consciousness of unity among its people and according to the older view, a nation need not necessarily be a State.

The idea of nationality is not easy to define, for there is not one single factor to which it can be traced. It is essentially a sentiment of unity, the resultant of many forces; a community of race and language, geographic unity, a community of religion, common political aspirations, and above all historical development.

He argues that a nation comes into existence only when several elements have come together, especially economic life, language, and territory. According to Ernest Renan, “a nation is a soul, a spiritual principle – only two things constitute this soul: one is in the past; the other is in the present”. One is the possession in common of a rich legacy of remembrances, and the other is the actual consent. The desire to live together, the will to continue to value the heritage, which holds in common, contributes to the feeling of nationality.

Know-How: The problem was not only increasing production but also reducing disparities. Pandit Jawaharlal Nehru preferred a planned and mixed economy to make India a self-reliant modern nation without compromising its democratic and federal bases. Five years plans ensured plenty of irrigation schemes, institution of basic industries, speedy electrification and extensions of infrastructure facilities India was able to eliminate diseases like malaria, to ensure self-suﬃciency in food production, and to evolve and accelerate development of modern science and technologies.

However, during the late 60th and early 70th there were signs of recessions, which lead to political disturbances Wars with China and Pakistan added to economic miseries. Nationalisation of bank by Indira Gandhi, electronic revolutions introduced by Rajiv Gandhi did contribute to some positive changes. By 1990, India had come forward to adopt market oriented new economic policy, thus opening india to LPG (Liberalisation Privatisation and Globalisation)

Agriculture: The agriculture sector has been declining since the mid-1990s.There were several farmers suicides since 1990 and the export-oriented agriculture has ruined the farmers especially the cotton growing farmers in the Vidarbha region of Maharashtra.

India’s agriculture sector, which houses more than 60 percent of the people, has grown at a rate of 1.65 percent between 1996/97 and 2004/05. This is cause for concern as it may produce India’s second agrarian crisis. (The first one was at the beginning of the 1960s) Subsidies to the rich and middle-income farmers like free power, price supports, free water, and free fertilizer have not been reduced but a public investment that uplifts all has come down.

US$15 billion loan waiver for farmers announced in the populist Union budget of 2008/09 will not affect the majority of the marginal farmers. 80 percent of the marginal farmers do not have access to formal loans. Drought proofing 60 million hectares of arable land with the same amount of money would have produced results that are more inclusive.

Industry: The Industrial Disputes Act protects less than 10 percent of India’s workforce, which means that more than 90 percent of the workers are in the unorganised sector. The public sector has unionised workers with greater bargaining power and the private sector keeps the workers from joining any union and from taking up any labour issues. Indian industry remains capital intensive, resulting in high-level unemployment in the formal sector. Unemployment is steadily rising resulting in informalisation and casualisation of work.

Political Challenges: Interstate inequalities have increased in the post -1991 period. As the Central government’s role in funding the State governments became less, the States needed to attract private investment. Some States have turned themselves a hub for foreign investment and some could not. This has resulted in the uneven development of States.

Union-State Relations: With more states in India coming under the influence of regional parties, the Union-State relations have suffered a setback. Earlier, the party in the centre and most of the states were same now the parties ruling the states are different and the regional parties are asking for more state autonomy and a greater role for the Inter-State council. They are also asking for more sharing of the finances from the centre (as the financial relations of the State are limited).

Human development in areas such as primary education and health leave a lot to be desired. The result is that even though there has been a decline in the number of people below the poverty line, a strategy of inclusive growth would have achieved poverty alleviation more rapidly.

A shift to LPG since 1990 also resulted in increasing disparities leading to extensive socio -political unrest in different parts of the country. The scheduled caste, the scheduled tribes and other Backward communities, need to be given more attention, so as to ensure social integration and national unity.

Communalism: India has witnessed communal violence since the time of partition. Political parties, movements with ulterior motives, fundamental groups spread the stories of hatred among the different communities. It is the ‘narratives of hatred’ spread by these groups that result in the communal clashes. Minorities are often victims of the communal clashes and their property and livelihood are greatly affected.

Caste and Gender Discrimination: Caste clashes and caste discrimination continues to be a major challenge for nation building. In spite of strict laws passed against untouchability, the practice continues in places where the caste system in pronounced. (Dis) honour killing is a major blow to the inter-caste marriages in India.

Women are not treated equally to men is a reality and their representation in politics is abysmally low and Violence Against Women (VAW) is increasing. 33% reservation of seats for women in the parliament and assembly seats are yet to be materialised.

The major challenge for India’s development is inclusive growth. Growth has unambiguously reduced poverty and improved the human condition in India. However, the gains of the middle and richer classes have been greater than those that went to the poorer sections of society. This is evident from the fact that reforms in areas such as telecommunications, banks, stock markets, airlines, trade and industrial policy have not been matched by agricultural and human development. India’s industrialisation continues to be capital and knowledge-intensive at a time when over 250 million people survive on less than a dollar a day. If India grows in this way it will take a longer time to eradicate poverty, illiteracy, and malnutrition. Moreover, slow progress in human development in areas such as education and health will make it tougher for India to grow in the long run.

The socio-economic and political challenges highlighted above are major challenges to nation building.

Nehru’s letter to Chief Ministers on Nationalism. In 1953, after the success of Everest Expedition

“The final ascent of Everest has been a great achievement in which all of us should take pride. Here again there has been great pettiness and the narrowest type of nationalism shown by some people.

Controversies have arisen as to whether Tenzing got there first or Hillary, and whether Tenzing is an Indian national or a Nepalese national. It does not make the slightest difference ... Neither could have done so without the help of the other. 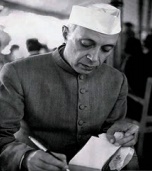 Great human achievements are always the result of combined endeavours in which numerous people take part. It may be that one person takes the last step, but the other persons also count and should not be forgotten.

For us to show a narrow and deplorable nationalism in such matters is not to add to the credit of our country but to lead people to think that we are petty in outlook and suffering from some kind of inferiority complex.”

Topic: Culture played an important role in creating the idea of the nation in India.