Volvulus is a twisting of a segment of bowel on its vascular mesentery, causing intestinal obstruction and infarction.

Volvulus is a twisting of a segment of bowel on its vascular mesentery, causing intestinal obstruction and infarction. It is often associated with congenital abnormalities such as intestinal malrotation. Common locations include the sigmoid colon and small bowel; complications include infarction and peritonitis.

Intussusception is the telescoping of a proximal segment of the bowel into the distal segment. It is most common in infants and children. Children present with vomiting, abdominal pain, passage of blood per rectum, and lethargy; a sausage-shapedmass is often palpable in the right hypochondrium.

In adults, intussusception may be caused by a mass or tumor. The intussusceptedsegment can become infarcted.

Incarcerated hernia is a segment of bowel that is imprisoned within a hernia; the condition can become complicated by intestinal obstruction and infarction.

Hirschsprung disease (or congenital aganglionic megacolon) is caused by congenital absence of ganglion cells in the rectum and sigmoid colon, resulting in intestinal obstruction. The condition affects males more than females, and can be associated with Down syndrome. Hirschsprung may present with delayed passage of meco-nium, or with constipation, abdominal distention, and vomiting.

Celiac sprue (or gluten-sensitive enteropathy and nontropical sprue) is caused by hypersensitivity to gluten (and gliadin), resulting in loss of small bowel villi and malabsorption. HLA-DQ2 and/or -DQ8 are carried by most patients. Microscopic exam demonstrates a loss of villi, with increased intraepithelial lymphocytes and increased plasma cells in the lamina propria.

Clinically, it often presents in childhood with malabsorption. Symptoms include abdominal distention, bloating, and flatulence, along with diarrhea, steatorrhea, and weight loss. Dermatitis herpetiformis may occur age >20. In adults, celiac presents between decades 4-7. Treatment is dietary restriction of gluten. There is an increased risk of gastrointestinal cancer. 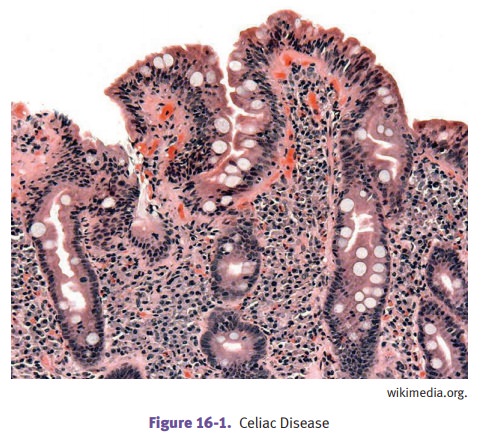 Environmental enteropathy (previously known as tropical sprue) is a maladaptive disease of unknown etiology (infection and/or nutritional deficiency). If affects resi-dents of low-income countries. Biopsy shows blunting of villi and a lymphocytic infiltrate.

Inflammatory bowel disease (IBD). There are 2 categories of IBD:

Caucasians develop IBD more frequently than non-Caucasians. The incidence of IBD is increasing.

Age distribution varies with the disease:

IBD can present with episodes of bloody diarrhea or stools with mucus, crampy lower abdominal pain, or fever. CD may present with malabsorption or extraint-estinal manifestations. It may mimic appendicitis. CD may cause perianal fistulas.

New studies indicate that risk of colorectal carcinoma (CRC) in CD and UC are equivalent for similar extent and duration of disease; the risk of CRC is not as high as previous studies suggested. 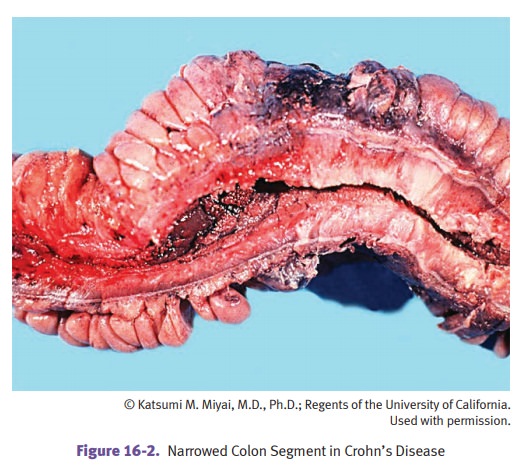 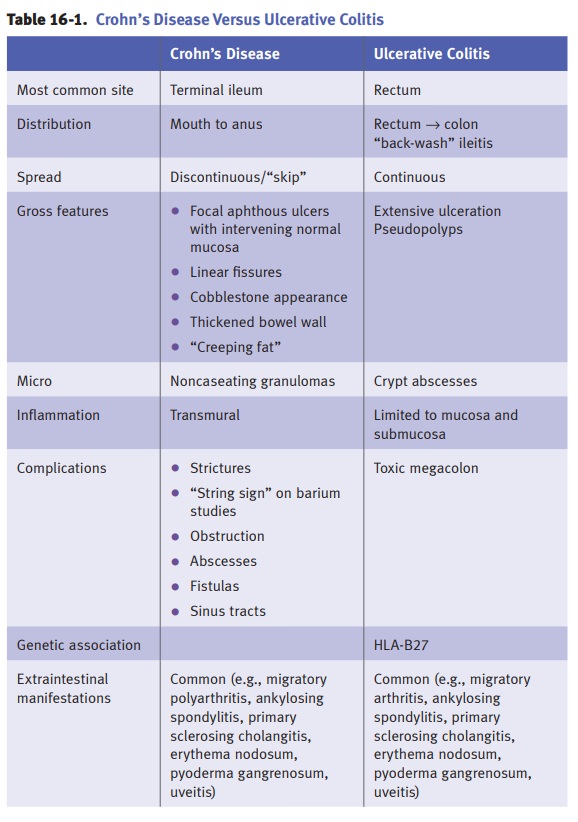 Ischemic bowel disease is caused by decreased blood flow and ischemia of the bowel, secondary to atherosclerosis with thrombosis, thromboembolism, or reduced car-diac output from shock. It is most common in older individuals. Typical presenta-tion is with abdominal pain and bloody diarrhea. The disease distribution tends to involve watershed areas (e.g., splenic flexure), and affected areas typically show hemorrhagic infarction.

Treatment is surgical resection, but the prognosis is poor, with >50% mortality.

Angiodysplasia is arteriovenous malformations of the intestines. It occurs in the cecum and right colon. Individuals age >55 are most commonly affected, presenting with multiple episodes of rectal bleeding. It is associated with Osler-Weber-Rendu and CREST syndromes. Treatment is surgical resection.

Melanosis coli is common with laxative abuse; it causes black pigmentation of the colon due to the ingestion of the laxative pigment by macrophages in the mucosal and submucosa. It can mimic colitis or malignancy.

Pseudomembranous colitis (antibiotic-associated colitis) is an acute colitis charac-terized by the formation of inflammatory pseudomembranes in the intestines. It is usually caused by Clostridium difficile infection (often brought on by a course of broad-spectrum antibiotics, especially clindamycin and ampicillin), but it can be caused by ischemic bowel disease.

Gross examination shows yellow-tan mucosal membranes. Microscopic exam shows the pseudomembranes are composed of an adherent layer of acute inflammatory cells, mucus and necrotic debris overlying sites of colonic mucosal injury. Presenta-tion is with diarrhea, fever, and abdominal cramps. Diagnosis is established with detection of C. difficile toxin in the stool. Treatment of clostrial pseudomembranous colitis is vancomycin or metronidazole.

Appendicitis is most commonly caused by obstruction of the appendix by a feca-lith. It often starts with periumbilical pain that subsequently localizes to the right lower quadrant. Nausea, vomiting, and fever may also be present. Lab studies show an elevated white blood cell count. A complication is appendiceal rupture leading to peritonitis. Grossly, a fibrinopurulent exudate may be seen on the appendiceal serosa; microscopically, neutrophils are present within the mucosa and muscular wall (muscularis propria) of the appendix.

Meckel diverticulum is a congenital small bowel diverticulum caused by persistance of a remnant of the vitelline (omphalomesenteric) duct. With Meckel, the “rule of 2s” applies:

Most Meckel diverticula are asymptomatic but they may contain rests of ectopic gastric mucosa and present with intestinal bleeding.

Colonic diverticulosis is an acquired outpouching of the bowel wall, characterized by herniation of the mucosa and submucosa through the muscularis propria (pseu-dodiverticulum). It is extremely common in the United States.

•         Major risk factor is a low-fiber diet, which leads to increased intraluminal pressure

Many cases are asymptomatic and picked up on screening colonoscopy. When symptomatic, it can cause constipation alternating with diarrhea, left lower quad-rant abdominal cramping and discomfort, occult bleeding and an iron deficiency anemia, or lower gastrointestinal tract hemorrhage. Complications include diver-ticulitis, fistulas, and perforation with accompanying peritonitis.

Hamartomatous polyps include nonfamilial juvenile polyps and polyps associated with a familial (Peutz-Jeghers) syndrome. Nonsyndromic polyps do not have malig-nant potential.

Hyperplastic polyps are the most common histologic type; they occur most often in the left colon and are usually <5 mm. Although previously considered not to have malignant potential, newer studies suggest they are part of a group of polyps with serrated histology and risk of progression to cancer. Serrated polyps occur more often in the right colon. 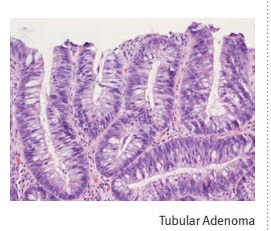 Tubular and villous adenomas have long been known to have malignant potential. Microscopically, they show cellular dysplasia and either pure tubular, pure villous or tubulovillous histology.

Hereditary nonpolyposis colorectal cancer (HNPCC), or Lynch syndrome, is due to an autosomal dominant mutation of a DNA nucleotide mismatch repair gene that predisposes for colon cancer. It is associated with an increased risk of cancer at other sites, including the endometrium and the ovary.

Peutz-Jeghers syndrome is an autosomal dominant condition characterized by mul-tiple hamartomatous polyps (primarily in the small intestine); melanin pigmenta-tion of the oral mucosa; and increased risk of cancer at numerous sites including the lung, pancreas, breast, and uterus.

Colonic adenocarcinoma is the third most common tumor in the United States, in terms of incidence and mortality. Risk factors include:

Diagnosis is established via endoscopy with biopsy.

Cancer genetics: Mutations of the APC gene cause activation of the Wnt pathway, leading β-catenin to translocate to the nucleus where it causes the overexpression of growth-promoting genes. DNA mismatch repair causes microsatellite instability, which is another genetic carcinogenesis pathway.

The pattern of spread in colonic adenocarcinoma includes lymphatic spread to mes-enteric lymph nodes, with distant spread to liver, lungs, and bone. Staging is with the TNM system. Treatment can include surgical resection and chemotherapy (for metastatic disease); CEA levels can be used to monitor for disease recurrence.

Carcinoid tumors are neuroendocrine tumors that often produce serotonin. Loca-tions include the appendix (most common) and the terminal ileum. Metastasis to the liver may result in carcinoid heart disease.

Gastrointestinal stromal tumor (GIST) is the most common sarcoma of the GI tract. Most cases have a KIT mutation. The peak incidence is in decade 7. Treatment is resection and a tyrosine-kinase inhibitor.