Pyloric stenosis is a congenital stenosis of the pylorus due to marked muscular hypertrophy of the pyloric sphincter, resulting in gastric outlet obstruction.

Pyloric stenosis is a congenital stenosis of the pylorus due to marked muscular hypertrophy of the pyloric sphincter, resulting in gastric outlet obstruction. It affects male infants more than females. It is associated with Turner and Edwards syn-dromes. Presentation is the onset of regurgitation and vomiting in week 2 of life; waves of peristalsis are visible on the abdomen and there is a palpable oval abdomi-nal mass. Treatment is surgical.

Ménétrier disease is a rare disease of middle-aged men. It is caused by profound hyperplasia of surface mucous cells, accompanied by glandular atrophy. It is char-acterized by enlarged rugal folds in the body and fundus; clinically, patients experi-ence decreased acid production, protein-losing enteropathy, and increased risk of gastric cancer.

Acute hemorrhagic gastritis causes acute inflammation, erosion, and hemorrhage of the gastric mucosa, secondary to a breakdown of the mucosal barrier and acid-induced injury. The etiology is diverse, with initiating agents including chronic aspirin or NSAID use, alcohol use, smoking, recent surgery, burns, ischemia, stress, uremia, and chemotherapy. Patients present with epigastric abdominal pain, or with gastric hemorrhage, hematemesis, and melena.

Gastric stress ulcers are multiple, small, round, superficial ulcers of the stomach and duodenum. Predisposing factors include:

ICU patients have a high incidence of gastric stress ulcer. These ulcers may be com-plicated by bleeding.

Fundic type chronic gastritis is an autoimmune atrophic gastritis that involves the body and the fundus. It is caused by autoantibodies directed against parietal cells and/or intrinsic factor. The result is loss of parietal cells, decreased acid secretion, increased serum gastrin (G-cell hyperplasia), and pernicious anemia (megaloblastic anemia due to lack of intrinsic factor and B12 malabsorption). Women are affected more than men.

Grossly, one sees a loss of rugal folds in the body and fundus. Microscopically, mucosal atrophy is seen with loss of glands and parietal cells, chronic lymphoplas-macytic inflammation, and intestinal metaplasia. Patients are at increased risk for gastric carcinoma.

Microscopically, H. pylori organisms are visible in the mucous layer of the surface epithelium. Other microscopic features include foci of acute inflammation, chronic inflammation with lymphoid follicles, and intestinal metaplasia.

Peptic ulcers are ulcers of the distal stomach and proximal duodenum caused by gastric secretions (hydrochloric acid and pepsin) and impaired mucosal defenses. Predisposing factors include the following:

Patients present with burning epigastric pain. Diagnosis is by endoscopy with or without biopsy. Treatment is acid suppression (H2 blocker, proton pump inhibitor, etc.) and eradication of H. pylori.

Most duodenal peptic ulcers are located in the anterior wall of the proximal duo-denum. 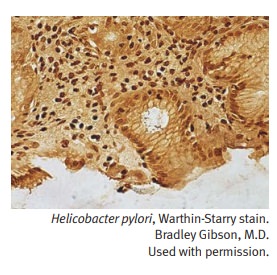 Gastric peptic ulcers are associated with H. pylori (75%). Most are located in the lesser curvature of the antrum. Grossly, they are small (<3 cm), sharply demar-cated (‘punched out’), solitary with round/oval shape, smooth borders, and radiating mucosal folds. 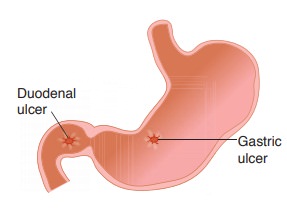 Gastric carcinoma is often (90%) asymptomatic until late in the course, when it can produce weight loss and anorexia. It can also present with epigastric abdominal pain mimicking a peptic ulcer, early satiety, and occult bleeding with iron deficiency anemia.

Most gastric carcinomas are located in the lesser curvature of the antrum. They are large (>3 cm) ulcers with heaped-up margins and a necrotic ulcer base. They may also occur as a flat or polypoid mass. Several histological types occur.

Gastric carcinoma may specifically metastasize to the left supraclavicular lymph node (Virchow sentinel node) and to the ovary (Krukenberg tumor).

Diagnosis is by endoscopy with biopsy; treatment is gastrectomy. The prognosis is poor, with overall 5-year survival ~30%.