India today operates the largest and oldest programme for the development of small scale enterprises in any developing country. The small enterprises have made an impressive and phenomenal growth in units, production and employment, exports over the years. The small sector has now emerged as a dynamic and vibrant sector of the Indian economy in the recent years. 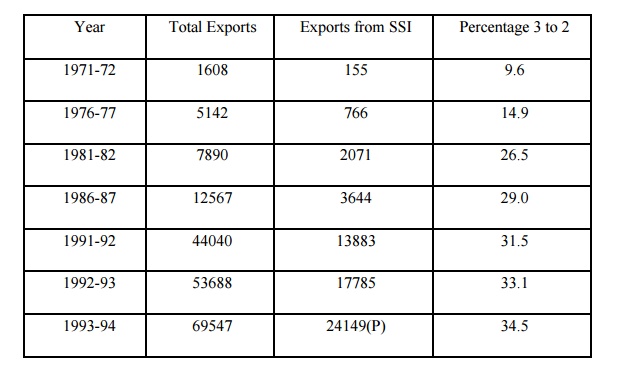 India's share in world exports is very low, at about 0.5 percent. India is now the member of World Trade Organization-WTO. It has to improve its share in world's exports to be a global player. Given the large industrial sector's attention focused more on internal market than the international market, on the one hand and decreasing exports of primary products and traditional items on the other hand, we need to concentrate on small enterprises to increase our exports as its hold potential for it.

However, the export performance of smalls sector exhibits some disturbing features also (1) About 83% of total exports from small sector accounted for by four items alone denotes the lack of diversi cation in export items of small sector. Even the items having good potential for exports like leather products, account for 3 to 4 percent of global exports. (2) Hence, in order to boost the SSI exports, the new potential markets need to the explored and tapped.

The small scale units have very weak base of their own funds on the one hand and have no access to other sources of funds like capital market, on the other. Hence, they have to depend upon the state nancial corporations (SFCs) and the commercial banks to meet their long term and short capital requirements. The actual availability of credit from the nancial statements, institutions was very low at 8.1 percent of output. In case of tiny units, it was merely 2.7% of their output.

Lack of infrastructure facilities like power supply, transportation and communication aduersely a ect the quality and quantity of production, its cost and delivery. These, in turn, tell upon the export performance of small scale units. The launching of new scheme of 'Integrated Infrastructure Development' in rural and backward areas is a right step in right direction.

Technology is the crux of quality and competitiveness. However, the adoption of technology in small scale industries hampered due to lack of infrastructural facilities, on the one hand and the present investment ceiling of the small scale industry on the other. Nevertheless the government has setup several tool rooms, production-cum-process development centres, regional testing centres and workshops, schemes of industrial parks and 18,09,000 to break the prevailing inertia and promote exports from small scale units.

The recent telecommunication revolution has o ered hi-tech application for market research which is most cost e ective substitute for exploratory personal visits abroad. As a matter of fact, conventional method of market explorations through trail and error and private contracts has been replaced by the electronic network exchanging business queries between the trading parties.

Given the constraints and weakness of small sector, one cannot conclude the small scale sector has no strong point which help it emerge as a global player. The small units are inherently exible to react to market signals and changing tastes. This makes the small enterprise more innovative and open to new ideas. Opportunities exist for small scale sector to emerge a strong global player especially in the exports of the following products.

India has been the second largest producer of a very wide variety of fruits and vegetables in the world. But it processes less than 1% of production. At the end of 1992, the number of processing units registered under fruit products order was 4,057 of which 87% belonged to small scale and cottage industries sector.

The major reason for country's low share in the international market have been over-dependence on a few recognized international markets, lack of quality control, poor packaging, high cost of production, inadequacy of infrastructure like transport and power and non-availability of required inputs at right time and prise. Considering the growing international demand for processed foods, the items which hold good potential for exports from India are sea-foods, spices, cashews, nuts, fruits and vegetables, fruits pulp, juices, jams, pickles, canned fruits and vegetable dehydrated vegetables and gaur gums.

India has the largest cattle population and thus has a substantial raw material base for leather based industries, At present, the country's share in the world leather market is about 4 percent and the target is to raise it by 10 percent by 2000's because this sector holds potential for exports. The sector is plagued by weaknesses like low volume of production units, poor quality, lack of standardization poor delivery and absence of technological upgradation. These weaknesses need to be attended to expeditiously and adequately tap the export potential of leather goods in the country.

The electronic industry has registered a phenomenal compound growth rate of 35% during the last decade 1981-1990. The share of small sector in 1993-1994 was 40% of output and 30% of exports of electrical industry 80% of exports of electrical goods are from 'Export Processing Zone' alone. The electronic industry holds tremendous potential for exports in electronics, software and contract manufacturing. This potential needs to be tapped.

India has the third largest technical manpower in the world. Recently, the technically quali ed people have started assuming the role of exports. Some of them have made an impressive head-way in export within a short period what is needed, is to provide them support in terms of developed industrial shed/ plants and credit facility.

At present, out of 18500 units manufacturing various industrial and consumer plastics, around 18000 units are in small sector. The items of plastic exports include carry bags, garbage bags, shopping bags, woven sacks, plastic moulded household items like insulated thermoware, pens, spectacles frames, PVC hoses, PVC leather cloths etc. In 1992-1993, the small sector accounted for 45% of these exports. There still exists enough scope to diversify the products and penetrate new markets. There main problems in this industry is facing is shortage of plastic raw materials, (i.e) polymer. But, this has, in turn helped the development of recycling of plastic waste industry and eco-friendly measure.

Realising the good export potential of small sector, the board of Trade & Ministry of Commerce have identi ed 8 sectors and 15 items respectively for boosting exports from the small scale sector. The bug bear of the sector has been the inadequacies of the capital, technology and marketing. If the export potential of small scale enterprises is to be tapped to the full extend, then the issues like simpli cation of procedures, easier access to the bank and institutional credit, improvement in infrastructure and marketing issues need to be attend to expeditiously and adequately we wish our small enterprises a " Vibrant Player in the International Business".