No one who has worked in any branch of medicine will doubt the importance of diseases of the skin.

No one who has worked in any branch of medicine will doubt the importance of diseases of the skin. A neurologist, for example, will know all about the Sturge–Weber syndrome, a gastroenterologist about the Peutz–Jeghers syndrome, and a cardiologist about the LEOPARD syndrome; but even in their own wards they will see far more of other common skin conditions such as drug eruptions, asteatotic eczema and scabies. They should know about these too.

In primary care, skin problems are even more important, and the prevalence of some common skin conditions, such as skin cancer and atopic eczema, is undoubtedly rising. Currently, skin disorders account for about 15% of all consultations in general practice in the UK, but this is only the tip of an iceberg of skin disease, the sunken part of which consists of problems that never get to doctors, being dealt with or ignored in the community.

How large is this problem? No one quite knows, as those who are not keen to see their doctors seldom star in the medical literature. The results of a study of the responses to minor ailments of all types are shown in Table 1.2; clearly a few sufferers took more than one course of action.

These responses apply to skin disorders too, and form the basis for the ‘iceberg’ of psoriasis in the UK shown in Fig. 1.2. In the course of a single year most of those with psoriasis see no doctor, and only a few will see a dermatologist. Some may have fallen victim to fraudulent practices, such as ‘herbal’ preparations laced with steroids, and baseless advice on ‘allergies’. 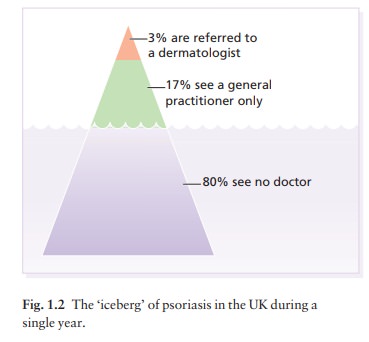 Several large studies have confirmed that this is the case with other skin diseases too.

•   A community study of adults in the UK found 22.5% to have a skin disease needing medical attention: only one in five of these had seen a doctor within the preced-ing 6 months. Self-medication was far more common than any treatment prescribed by doctors.

•   In another UK study, 14% of adults and 19% of children had used a skin medication during the previous 2 weeks; only one-tenth of these were prescribed by doctors. In a study of several tons of unused medicinal preparations, 7% by weight were manufactured for topical use on the skin.

•   Preparations used to treat skin disease can be found in about half of all homes in the UK; the ratio of non-prescribed to prescribed remedies is about 6 : 1. Skin treatments come second only to painkillers in the list of non-prescription medicines. Even so, in the list of the most commonly prescribed groups of drugs in the UK, those for topical use in skin conditions still come secondabehind diuretics. 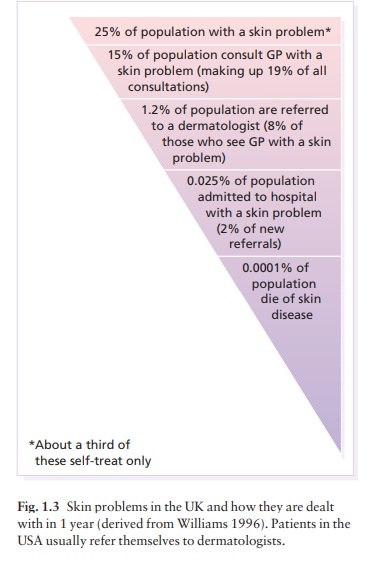 Every 10 years or so we are given a snapshot of the way skin disorders are being dealt with in the UK, in a series of reports entitled Morbidity Statistics fromGeneral Practice. Some of the details from these, andfrom other studies, are given in Fig. 1.3. In addition, within each community, different age groups suffer from different skin conditions. In the USA, for example, diseases of the sebaceous glands (mainly acne) peak at the age of about 18 years and then decline, while the prevalence of skin tumours steadily mounts with age (Fig. 1.4). 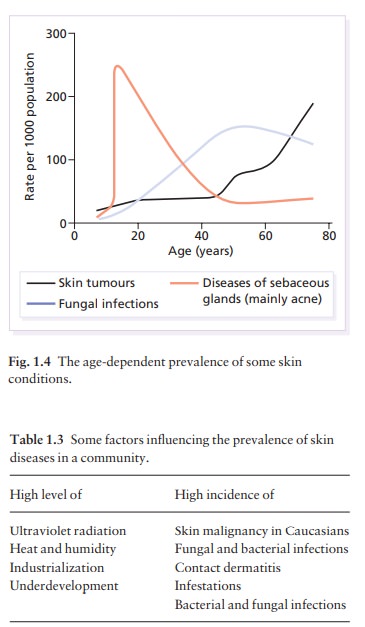 The pattern of skin disease in a community depends on many other factors too, both genetic and environ-mental; some are listed in Table 1.3.