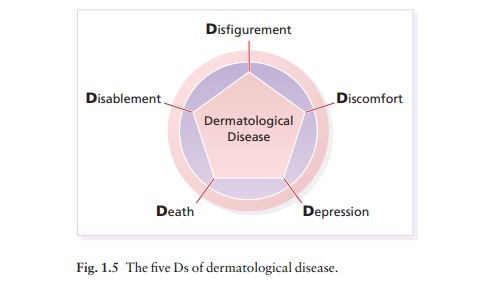 Much of this book is taken up with ways in which skin diseases can do harm.

Much of this book is taken up with ways in which skin diseases can do harm. Most fit into the five Ds shown in Fig. 1.5; others are more subtle. Topical treatment, for example, can seem illogical to those who think that their skin disease is emotional in origin; it has been shown recently that psoriatics with great disability comply especially poorly with topical treatment. 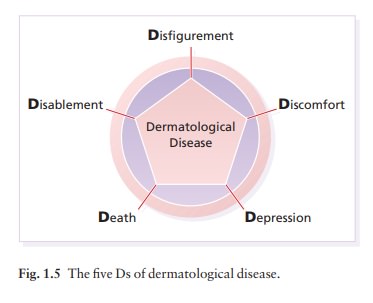 In addition, the problems created by skin disease do not necessarily tally with the extent and severity of the eruption as judged by an outside observer. Quality-of-life studies give a different, patient-based, view of skin conditions. Questionnaires have been designed to compare the impact of skin diseases with those of other conditions; patients with bad psoriasis, for example, have at least as great a disability as those with angina. In the background lurk problems due to the costs of treatment and time lost from work.

They range from a leper (e.g. some patients with psoriasis,), to embarrass-ment (e.g. port-wine stains, Fig. 1.6) or androgenetic alopecia in both men and women. Disorders of body image can lead those who have no skin disease to think that they have, and even to commit suicide in this mistaken belief (dermatological non-disease). 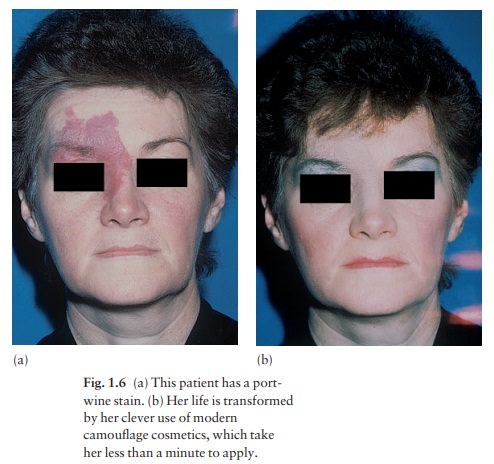 Skin conditions are capable of ruining the quality of anyone’s life. Each carries its own set of problems. At the most obvious level, dermatitis of the hands can quickly destroy a manual worker’s earning capacity, as many hairdressers, nurses, cooks and mechanics know to their cost. In the USA, skin diseases account for almost half of all cases of occupational illness and cause more than 50 million days to be lost from work each year.

Disability and disfigurement can blend in a more subtle way, so that, for example, in times of unem-ployment people with acne find it hard to get jobs. Psoriatics in the USA, already plagued by tactless hairdressers and messy treatments, have been shown to lose thousands of dollars in earnings by virtue of time taken off work. Even trivial psoriasis on the fingertips of blind people can have a huge effect on their lives by making it impossible to read Braille.

The physical, sensory and functional problems listed above often lead to depression and anxiety, even in the most stable people. Depression also seems to modulate the perception of itching, which becomes much worse. Feelings of stigmatization and rejection are common in patients with chronic skin diseases: up to 10% of patients with psoriasis that they think is bad have had suicidal thoughts.

Deaths from skin disease are fortunately rare, but they do occur (e.g. in pemphigus, toxic epidermal necrolysis and cutaneous malignancies). In addition, the stresses generated by a chronic skin disorder such as psoriasis predispose to heavy smoking and drink-ing, which carry their own risks.

In this context, the concept of skin failure is an important one. It may occur when any inflammatory skin disease becomes so widespread that it prevents normal functioning of the skin, with the results listed in Table 1.4. Its causes include erythroderma, toxic epidermal necrolysis, severe erythema multiforme, pustular psoriasis  and pemphigus.