Shigella: Properties of the Bacteria

Shigella are aerobes and facultative anaerobes. They grow at atemperature range of 10–40°C with an optimum temperature of 37°C and pH 7.4.

a)Nutrient agar: They grow on ordinary media, such as nutrientagar or Mueller–Hinton agar. Shigella colonies on nutrient agar, after overnight incubation, are small, circular, convex, smooth, and translucent. Occasionally on primary isolation and frequently in subcultures, a proportion of the colonies may be of the rough type.

d)         Liquid media: Selenite F and Gram-negative (GN) brothare commonly used enrichment media. Enrichment of feces in GN broth for 4–6 hours followed by subculture on XLD or HE medium is useful for isolation of Shigella from clinical specimens.

·           Shigella also ferments glucose, producing acid but withoutgas. Newcastle and Manchester biotypes of S. flexneri type 6, and some strains of S. boydii types 13 and 14 are exceptions, which do not ferment glucose.

·            They do not ferment lactose, sucrose, salicin, adonitol, or inositol. However, S. sonnei ferments lactose and sucrose late.

·           They are catalase positive with exception of S. dysenteriae type 1, which is catalase negative.

The biochemical characteristics that are useful for distinguish-ing different Shigella species are listed in Table 33-2. 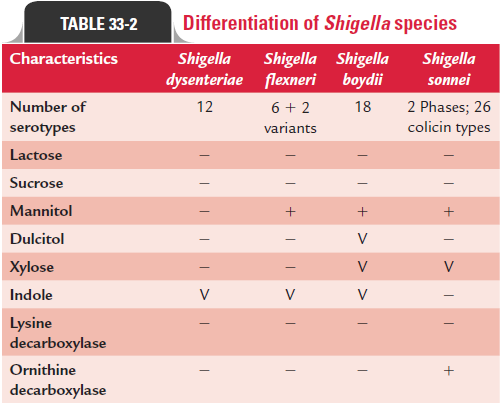 Susceptibility to physical and chemical agents: Shigellaeare killed at a temperature of 55°C in 1 hour or by 1% phenol in 30 minutes. In feces, they die within a few hours due to acidity produced by the growth of intestinal bacteria. They remain viable in moist environments for days, but die rapidly on drying. S. sonnei is in general more resistant to unfavorable environmental conditions than the other Shigella species.