Chapter: Civil : Mechanics Of Solids : Transverse Loading On Beams And Stresses In Beam

Concept of Shear Force and Bending moment in beams: When the beam is loaded in some arbitrarily manner, the internal forces and moments are developed and the terms shear force and bending moments come into pictures which are helpful to analyze the beams further.

Concept of Shear Force and Bending moment in beams:

When the beam is loaded in some arbitrarily manner, the internal forces and moments are developed and the terms shear force and bending moments come into pictures which are helpful to analyze the beams further. Let us define these terms

Now let us consider the beam as shown in fig 1(a) which is supporting the loads P1, P2, P3 and is simply supported at two points creating the reactions R1 and R2respectively. Now let us assume that the beam is to divided into or imagined to be cut into two portions at a section AA. Now let us assume that the resultant of loads and reactions to the left of AA is „F' vertically upwards, and

since the entire beam is to remain in equilibrium, thus the resultant of forces to the right of AA must also be F, acting downwards. This forces „F' is as a shear force. The shearing force at any x-

section of a beam represents the tendency for the portion of the beam to one side of the section to slide or shear laterally relative to the other portion.

Therefore, now we are in a position to define the shear force „F' to as follows:

At any x-section of a beam, the shear force „F' is the algebraic sum of all the lateral components of the forces acting on either side of the x-section.

The usual sign conventions to be followed for the shear forces have been illustrated in figures 2 and 3.

Let us again consider the beam which is simply supported at the two prints, carrying loads P1, P2 and P3 and having the reactions R1 and R2 at the supports Fig 4. Now, let us imagine that the beam is cut into two potions at the x-section AA. In a similar manner, as done for the case of shear force, if we say that the resultant moment about the section AA of all the loads and

reactions to the left of the x-section at AA is M in C.W direction, then moment of forces to the right of x-section AA must be „M' in C.C.W. Then „M' is called as the Bending moment and is

abbreviated as B.M. Now one can define the bending moment to be simply as the algebraic sum of the moments about an x-section of all the forces acting on either side of the section

For the bending moment, following sign conventions may be adopted as indicated in Fig 5 and Fig 6.

Some times, the terms „Sagging' and Hogging are generally used for the positive and negative bending moments respectively.

The diagrams which illustrate the variations in B.M and S.F values along the length of the beam for any fixed loading conditions would be helpful to analyze the beam further.

Similarly a bending moment diagram is a graphical plot which depicts how the internal bending moment „M' varies along the length of the beam. Again M is a function x i.e. M(x).

Basic Relationship Between The Rate of Loading, Shear Force and Bending Moment:

Let us consider a simply supported beam AB carrying a uniformly distributed load w/length. Let us imagine to cut a short slice of length dx cut out from this loaded beam at distance „x' from the origin „0'.

Let us detach this portion of the beam and draw its free body diagram.

• The shearing force F and F+ dF at the section x and x + dx respectively.

• The bending moment at the sections x and x + dx be M and M + dM respectively.

•  Force due to external loading, if „w' is the mean rate of loading per unit length then the total loading on this slice of length dx is w. dx, which is approximately acting through the centre „c'.

If the loading is assumed to be uniformly distributed then it would pass exactly through the centre „c'.

This small element must be in equilibrium under the action of these forces and couples.

Now let us take the moments at the point „c'. Such that

Conclusions: From the above relations,the following important conclusions may be drawn

•  From Equation (1), the area of the shear force diagram between any two points, from the basic calculus is the bending moment diagram

• The slope of bending moment diagram is the shear force,thus

• The maximum or minimum Bending moment occurs where

The slope of the shear force diagram is equal to the magnitude of the intensity of the distributed loading at any position along the beam. The -ve sign is as a consequence of our particular choice of sign conventions

Further, the determination of value of M as a function of „x' becomes of paramount importance so as to determine the value of deflection of beam subjected to a given loading.

A shear force diagram can be constructed from the loading diagram of the beam. In order to draw this, first the reactions must be determined always. Then the vertical components of forces and reactions are successively summed from the left end of the beam to preserve the mathematical sign conventions adopted. The shear at a section is simply equal to the sum of all the vertical forces to the left of the section.

It may also be observed that a constant shear force produces a uniform change in the bending moment, resulting in straight line in the moment diagram. If no shear force exists along a certain portion of a beam, then it indicates that there is no change in moment takes place. It may also further observe that dm/dx= F therefore, from the fundamental theorem of calculus the maximum or minimum moment occurs where the shear is zero. In order to check the validity of the bending moment diagram, the terminal conditions for the moment must be satisfied. If the end is free or pinned, the computed sum must be equal to zero. If the end is built in, the moment computed by the summation must be equal to the one calculated initially for the reaction. These conditions must always be satisfied.

Cantilever with a point load at the free end: 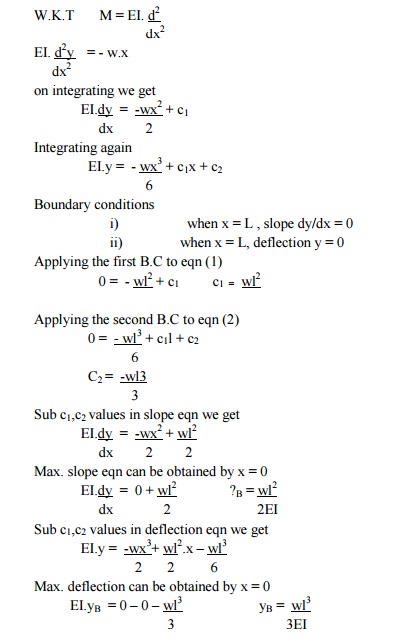 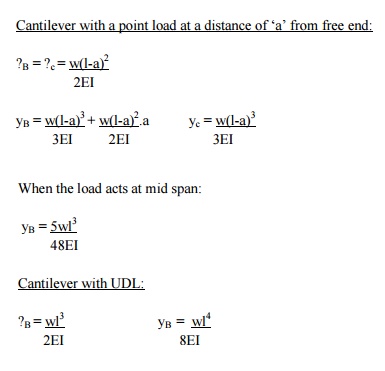 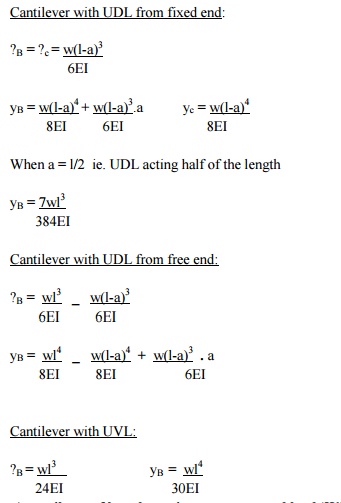 A cantilever of length carries a concentrated load 'W' at its free end.

At a section a distance x from free end consider the forces to the left, then F = -W (for all values of x) -ve sign means the shear force to the left of the x-section are in downward direction and therefore negative

so that the maximum bending moment occurs at the fixed end i.e. M = -W l

By symmetry the reactions at the two supports would be W/2 and W/2. now consider any section X-X from the left end then, the beam is under the action of following forces.

for all values greater = l/2 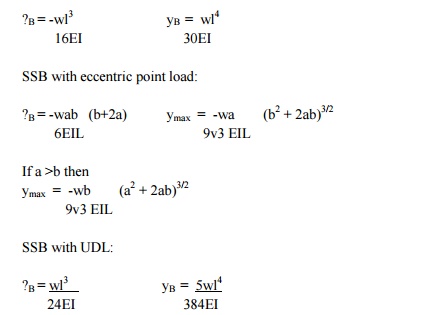 Consider the loaded beam a shown below along with the shear force and Bending moment diagrams for It may be observed that this case, the bending moment diagram is completely positive so that the curvature of the beam varies along its length, but it is always concave upwards or sagging.However if we consider a again a loaded beam as shown below along with the S.F and B.M diagrams, then

It may be noticed that for the beam loaded as in this case,

The point C on the beam where the curvature changes from sagging to hogging is a point of contraflexure.

Note: there can be more than one point of contraflexure