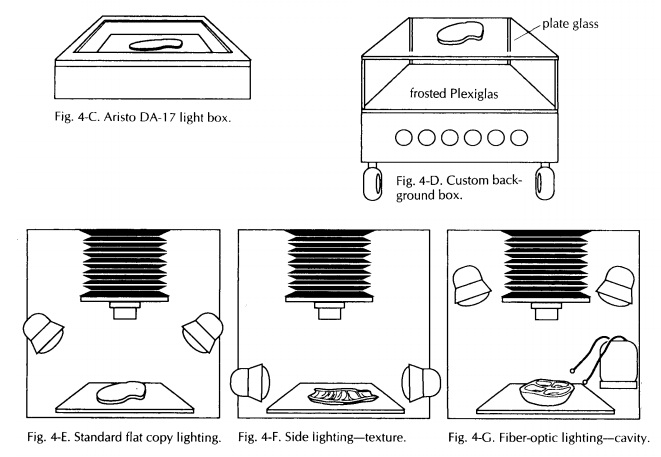 A variety of camera stands are on the market. Pick one with a sturdy column.

A variety of camera stands are on the market. Pick one with a sturdy column. Sturdy columns eliminate camera vibration, which causes photo-graphs to be out of focus. Probably the most ver-satile and easy to use system on the market is the Polaroid MP4, which consists of a heavy-duty stand, a 4 × 5-inch camera, and permanently mounted but adjustable lighting (Fig. 4-A). It also has an adapter for a 35-mm camera. With this system, Polaroid 4 × 5-inch black-and-white neg-ative film can be used to produce an instant print and negative. The print serves as an instant record, documenting the size and condition of the specimen, and notes can be made directly on the print, providing a visual correlate of the gross description. The negative can be filed and prints for publication made from it at a future date.

Most major camera manufacturers offer a choice of two types of macro lenses. The 60-mm macro lens is sufficient for 95% of routine work in the surgical pathology laboratory. The 105-mm macro lens allows for more working distance be-tween the specimen and the front of the lens. This feature is helpful when doing close-up work. Both of these macro lenses are extremely useful because they can focus down to a point where the image on the negative is the same size as the specimen, and they will cover specimens ranging in size from a large colon down to small polyps. One of the scales that is not present on most ordinary lenses, but that is printed on macro lenses, is the reproduction ratio. You should be familiar with this scale because, as discussed later, it can be used to determine the appropriate exposure for a specimen (Fig. 4-B). 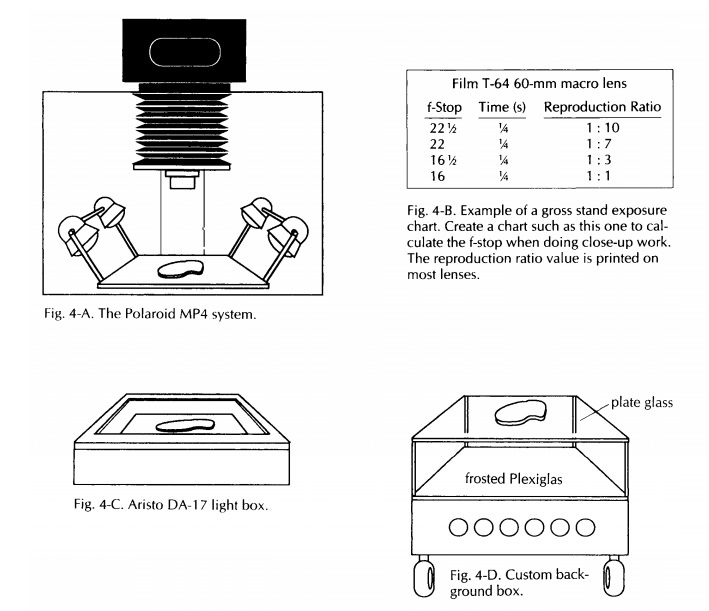 Before lighting the subject, background selection must be considered. The correct background will enhance and highlight the subject to be photo-graphed. A background table can be easily made or commercially purchased. The latter is a good choice but is only good for medium to small specimens. The Aristo Box DA-17 (Fig. 4-C) has a cool rectangular, fluorescent light inside. The box gives a flat shadowless illumination or, if turned upside down, a black background.

A more versatile system (Fig. 4-D) can be custom-made to fit space requirements. A custom background box should have even fluorescent lighting below a glass surface on which speci-mens can be placed. Immediately on top of the fluorescent lights is a place for opal glass or Plexiglas, which diffuses the light for an even background. Colored gels can then be placed on top of the Plexiglas for a variety of back-ground selections. There is then a space of about 6 to 8 inches between the background and the specimen glass. This system eliminates shadows on the background.

If colored gels are used for backgrounds, great care must be taken. An ill-chosen background color can affect the color of the specimen in the photograph. For many specimens, red, yellow, and green are colors to avoid. Shooting an actual test photograph is the only way to tell for sure. One very simple type of background is a piece of black velvet available in fabric shops. This mate-rial will absorb all light that falls on it, yielding a pure black background. Therefore no shadows from the specimen will be seen. A solid black background also has the advantage of hiding liquids that have seeped out from a specimen. This makes a cleaner presentation in the final photograph.

Important features of a specimen may be hidden when the lighting is too dim or obscured when the lighting is too bright. Appropriate lighting, on the other hand, will actually enhance the photo-graphic demonstration of these findings. One of the many advantages of the Polaroid MP4 stand is the fact that the lights may be easily moved to highlight the features of a particular specimen. Lights placed in the standard 458 position (stan-dard copy lighting) provide an even, flat illumi-nation for the majority of specimens (Fig. 4-E).

The standard 458 positioning of the light source may not be optimal for every specimen. For ex-ample, when three-dimensional information is most important, the lights should be positioned at a lower angle (Fig. 4-F). This will provide shadows that will help suggest a relief or distin-guish a form from its background. This posi-tioning of the light source can help show texture as well. Another technique is to unplug the lights on one side so that a stronger contrast can be seen. The main thing to keep in mind is that lighting should not obscure information.

A good addition to a lighting system is a fiber-optic light source (Fig. 4-G). Manipulable fiber optic wands provide an excellent source of illu-mination when close-ups are required. They are particularly useful in illuminating cavities and crevices. When used in combination with other light sources, fiber-optic lights are also effective in ‘‘filling in’’ otherwise darkened areas. Keep in mind that when lighting changes are made, some changes in exposure may also be necessary.

Not only can 35-mm slides be used for projection at conferences, they can be used for publication as well. The slides also can be scanned into a com-puter, and letters, numbers, or arrows may be added. Other slides can be scanned and combined together, such as a gross and microscopic view on one slide. A 35-mm slide may be converted to a black-and-white print for publication.

Color slides are best obtained with a 35-mm single-lens-reflex camera with through-the-lens light metering. The best results are achieved with fine-grain films. A film should be selected for accurate color rendition, and it should match the Kelvin temperature of the lights used. Most gross specimen photography is done with tungsten halogen lamps (3200 K) as opposed to an elec-tronic flash (5500 K). Unlike the transient illumi-nation of the electronic flash, tungsten lamps provide constant illumination so that the lighting can be critically evaluated before the photograph is taken. Kodak Ektachrome tungsten EPY-64 is a good choice of film. This film is balanced for tungsten lamps, it has a high resolution, tends to match the true specimen colors, and is a user-processed film. (User-processed film can be pro-cessed at most hospital in-house photographic departments, usually on a same-day basis.) Films such as Kodachrome, on the other hand, tend to enhance red and yellow colors and must be sent to outside laboratories for processing.

The amount of light that reaches the film or digital camera can be controlled in two ways. One is to change the aperture. The aperture refers to the diameter of the lens diaphragm, and this can be adjusted by changing the f-stop. Each f-stop set-ting changes the amount of light passing through the lens by a factor of 2. The smaller the f-stop number, the larger the aperture and the more open the lens. For example, an f-stop of 2 will let more light into the camera than an f-stop of 22. The aperture also controls the depth of field, which refers to the zone of sharpness in front of and behind the point of focus. With large apertures (smaller f-stop numbers), everything outside the plane of focus abruptly becomes blurred. At very small apertures (such as an f-stop of 22), objects remain in focus over a greater depth of field. Therefore, optimal clarity is best achieved using a smaller aperture (higher f-stop).

The amount of light hitting the film is also controlled by the shutter speed. The shutter speed refers to the length of time that the lens is open. Each shutter speed, like the f-stop, doubles or halves the exposure at the next setting. Standard speeds on modern shutters are 1, 1/2, 1/4, 1/8, 1/15, 1/30, 1/60, 1/125 second, etc. Keep in mind that both the aperture and shutter control the amount of light falling on the film.

You need to identify the best f-stops and shut-ter speeds for your particular system by running a series of exposure tests for each different speci-men magnification. To do this, you need a light meter. An incident light meter works best because it measures the light falling on the specimen. The reflected light meters that are found in most cameras can be ‘‘fooled’’ and give incorrect read-ings because of the light coming from the back-ground. For example, reflected light meters may read too much of the background and not enough of the specimen when a lightly colored specimen on a black background is being photographed. Once the exposure is approximated with the hand-held incident light meter, a series of test exposures should be made at different magnifi-cations (reproduction ratios). Most manufactured lenses have reproduction ratios listed on the lens barrel for each magnification. In making this test run, choose a standard exposure such as 1/4 second, and then vary the aperture of the camera by one half of an f-stop at each magnification. This exposure time will enable you to use small apertures, which result in a better depth of field and translate into better specimen focus. The best aperture then can be determined for a spe-cific image magnification, and a chart can be made listing the correct aperture that matches each magnification (Fig. 4-B). While this system is easy to use, it may be necessary to modify the exposure for very dark blood-red specimens or very light white specimens.

While many find scales and labels unnecessary distracters in an otherwise aesthetic photograph, at least one of the specimen photographs should include a scale along with the specimen identifi-cation number. A scale helps the viewer orient the specimen and provides a benchmark for the perception of size, while specimen labeling en-sures that the photographs will not be lost or misidentified later. Commercially prepared plas-tic rulers are available that can be made into vari-ous sizes to accommodate different specimens. Small adhesive labels with the specimen identifi-cation number can be attached directly to the ruler. When placing the scale in a photograph, be sure to place it in the anatomical inferior posi-tion. The scale should be positioned at the level of the specimen so that it is in plane of focus.

When it comes to photographing gross speci-mens, digital images offer several advantages over conventional 35-mm photography. First and foremost is the ease with which an image, once captured in digital format, can be edited, orga-nized, catalogued, and stored. Second, a digital system permits immediate review of the image captured. Most digital cameras have a video ‘‘out’’ port that allows for the image to be cap-tured and displayed on a video monitor in real time. Some digital cameras are also equipped with small screens for reviewing the image cap-tured. Third, digital imaging is cost-effective. For laboratories that routinely use photography as a component of their gross dissections, digital image photography can reduce film and pro-cessing costs.

Digital imaging technology is advancing at breakneck speed. Each month seems to bring an updated digital camera that is less costly and of higher quality than the previous model. There are literally hundreds of digital cameras now on the market, and choosing the best one is a formi-dable task. When selecting a digital camera, one of the most important features to keep in mind is the resolution of the image sensor. Resolution has to do with the ability to appreciate fine detail in an image. Digital photographs are made up of thousands to millions of picture elements known as pixels, and the quality of an image depends, in part, on the number of pixels used to create the image. High pixel numbers enhance detail, sharpen edges, and provide a more meaningful record of the specimen. Conversely, low pixel numbers obscure fine detail and result in images that have less value for teaching, publication, and documentation of the gross findings. Keep in mind that a high-resolution digital camera is not a substitute for good judgment and technique. No matter how good the camera, informative images still require careful attention to specimen orienta-tion, lighting, and exposure.