A wide variety of measuring devices is available for collecting data from the manufacturing process lor use in feedback control. In general.a measuring device is composed of two components: a sensor and a transducer. The sensor detects the physical variable of interest (such as temperature. force. or pressure), The transducer converts the physical variable into an alternative form (commonly electrical voltage),quantifying the variable in the con. version.

A wide variety of measuring devices is available for collecting data from the manufactur ing process lor usc in feedback control. In general.a measuring device is composed of two components: a sensor and a transducer. The sensor detects the physical variable of interest (such astemperature. force. or pressure), The transducer converts the physical variable into an alternative form (commonly electrical voltage),quantifying the variable in the con. version. The quantified srgnat can be interpreted as the value of the measured variable. In some cases, the sensor and transducer are the same device; for example, a limit switch that converts the mechanical movement of a lever to close an electrical contact.

To use any measuring device. a calibration procedure is required to establish the re lations.hip between the physical variable to be measured and the converted output signal (such as voltage). The ease with which the calibration procedure can be accomplished is one criterion by which a measuring device can be evaluated. A list of desirable features of measuring devices for process control is presented in Table 5.2. Few measuring devices achieve perfect scores in all of these criteria. and the control system engineer must decide which features are the most important in selecting among the variety of available sensors and transducers for a given application

Consisreru with our ctasstncartcn of process variables, measuring devices can be classified into two basic categories: (1) analog and (2) discrete. An analog measuring device produces a continuous analog signal such as electrical voltage. Examples are thermocouples, strain gages.end potentiometers. The output signal from an analog measuring device must be convened to digital data by an analogtodigital converter (Section 5.3).A discrete measuring device produces an output that can have only certain values, Discrete sensor devices arc often divided into two categories: binary and digitaL A binary measuring device produces an on/off signal.The most common devices operate by closing an electrical contact from a normally open position. Limit switches operate in this manner. Other binary sensors include photoelectric sensors and proximity switches. A digital measuring device produces a digital output signal, either in the form of a set of parallel status bits [e.g .•a photoelectric sensor array) or a series of pulses that can be counted (e.g., an optical encoder). In either case, the digital signal represents the quantity to be measured. Digital transducers are finding increased usc because of the ease with which thev can be read when used as standalone measuring instruments and because of their compatibility with digital computer systems. Several of the common sensors and measuring devices used in industrial control systems are listed in Table 5.3 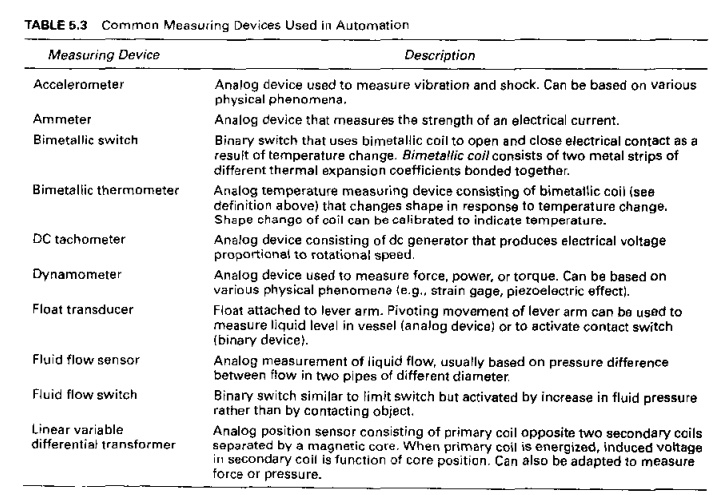 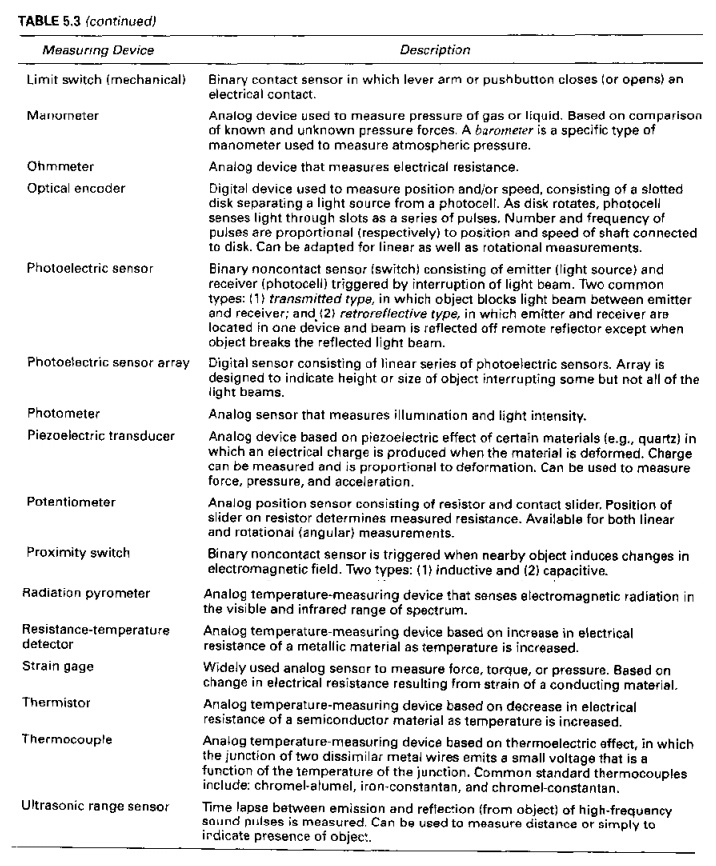