Continuous analog signals from the process must be converted into digital values to be used by the computer. and digital data generated by the computer must be converted to analog signals to be used by analog actuators. We discuss analogladigital conversion in this section and digitaltoanalog conversion in the following section

Tile procedure for converting an anaJogsignal from the process into digital fonn typically consists of the following steps and hardware devices, as illustrated in Figure 5.1:

Sensor and transducer. This is the measuring device that generates the analog signal (SectionS.1)

Signal conditioning.  The continuous   analog  signal from  the transducer   may require

conditioning to render it into more suitable form. Common signal conditioning steps include: (1) filtering to remove random noise and (2) conversion from one signal form to another, for example, converting a current into a voltage.

Amplifier. Amplifiers arc used to scale the incoming signal up or down to be compatible with the range of the analogtodigital converter.

Analogtndigital converter. As its name indicates, the function of the ADC is to convert the incoming analog signal into its digital counterpart. 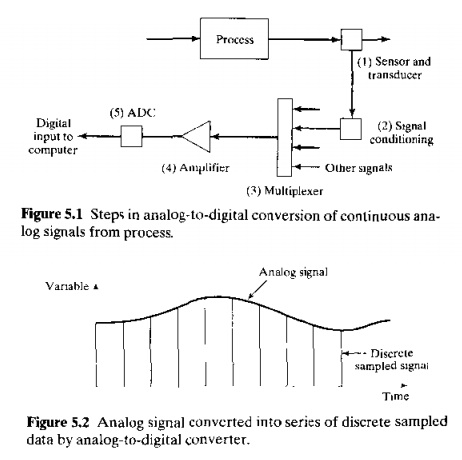 In selecting an analog-to-digital converter for a given application, the following factors are relevant: (I) sampling rate. (2) conversion time, (3) resolution, and (4) conversion method.

where Nq ~ number of quantization levels: and n = number of bits. Resolution can be defined in equation form as follows:

where R(ADC) =  resolution of the Anc. also called the quarui zationlevei spacing, which is the length of each quantization level; Range = fullscale range of the ADC, usually 010 V (the incoming signal must typically be amplified, either up or down, to this range); and N., = the number of quantization levels, defined in Eq. (5.1). 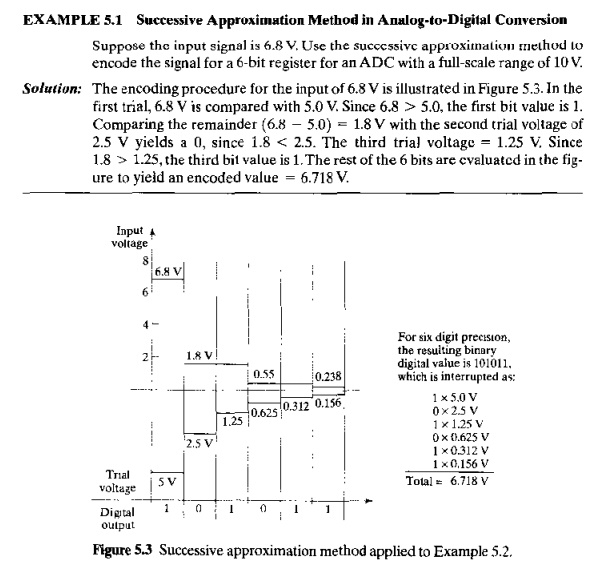 T'he obccuve in the data holding step ts 10 approximate the envelope termed by the data series, as illustrated in Figure 5.4. Data holding devices are classified according to the order of the extrapolation calculation used to determine the voltage output Juring sampling intervals. The most common extrapolator is a zeroorder hold, in which the output voltage between sampling instants is a sequence of step signals, as in Figure 5.4([1). The voltage function Juring the sampling interval is constant and can be expressed very simply as:

where E(r} = voltage as a function of time I during the sampling interval (V), and Eo = voltage output from the decoding step, Eq. (5.4).

The first-order data hold is less common than the zero-order hold, but it usually approximates the envelope of the sampled data values more closely. With the first-order hold, the voltage function £(t) during the sampling interval changes with a constant slope determined by the two preceding E" values. Expressing this mathematically, we have

where Eo = output voltage from Eq. (5A) at the stan of the sampling interval (V), T = time interval between sampling instants (sec), and F.,,(T) = value of Evfrom Eq. (5.4) from the preceding sampling instant (removed backward in time by T, V). The result of the first-order hold is illustrated in Figure 5.4(bl. 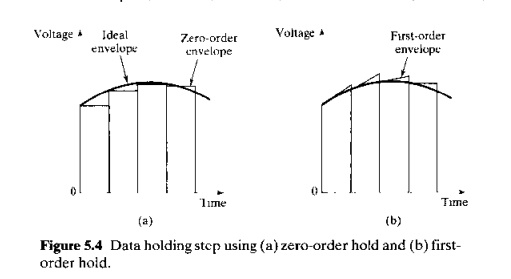 A digital-to-analog converter uses a reference voltage of 100 V and has 6-bit precision. In three successive sampling instants, 0.5 sec apart, the data contained in the binary register are the following'

Determine: (a) the decoder output values for the three sampling instants and the voltage signals between instants 2 and 3 for (b) a zeroorder hold and (c) a first-order hold.

The first-order hold yields a steadily increasing voltage. The slope a is given by Eq. (5.7): 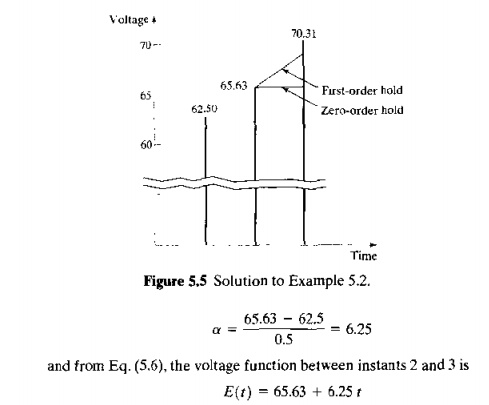 These values and functions are plotted in Figure 5.5. Note that the firstorder hold more accurately anticipates the value of EQ at sampling instant 3 than does the zero-order hold.