An attack is an act of or action that takes advantage of a vulnerability to compromise a controlled system.

An attack is an act of or action that takes advantage of a vulnerability to compromise a controlled system.

It is accomplished by a threat agent that damages or steals an organization’s information or physical asset.

Vulnerability is an identified weakness in a controlled system, where controls are not present or are no longer effective.

Attacks exist when a specific act or action comes into play and may cause a potential loss.

The malicious code attack includes the execution of viruses, worms, Trojan horses, and active Web scripts with the intent to destroy or steal information.

The state –of-the-art malicious code attack is the polymorphic or multivector, worm.

These attack programs use up to six known attack vectors to exploit a variety of vulnerabilities in commonly found information system devices.

The infected system scans a random or local range of IP addresses and targets any of several vulnerabilities known to hackers.

If the infected system has write access to any Web pages, it makes all Web content files (.html,.asp,.cgi & others) infectious, so that users who browse to those pages become infected.

Each infected machine infects certain common executable or script files on all computers to which it can write with virus code that can cause infection.

Using vulnerabilities in file systems and the way many organizations configure them, the infected machine copies the viral component to all locations it can reach.

By sending E-mail infections to addresses found in the address book, the infected machine infects many users, whose mail -reading programs also automatically run the program & infect other systems.

By using the widely known and common passwords that were employed in early versions of this protocol, the attacking program can gain control of the device. Most vendors have closed these vulnerabilities with software upgrades.

ü A more devious approach to attacking the computer systems is the transmission of a virus hoax with a real virus attached.

ü Even though these users are trying to avoid infection, they end up sending the attack on to their co-workers.

ü Using a known or previously unknown and newly discovered access mechanism, an attacker can gain access to a system or network resource through a back door.

ü Sometimes these entries are left behind by system designers or maintenance staff, and thus referred to as trap doors.

2.5.1  A trap door is hard to detect, because very often the programmer who puts it in place also makes the access exempt from the usual audit logging features of the system.

ü A password can be hashed using the same algorithm and compared to the hashed results, If they are same, the password has been cracked.

ü The application of computing & network resources to try every possible combination of options of a password is called a Brute force attack.

ü This is often an attempt to repeatedly guess passwords to commonly used accounts, it is sometimes called a password attack.

It is a technique used to gain unauthorized access to computers, where in the intruder sends messages to a computer that has an IP address that indicates that the messages are coming from a trusted host. 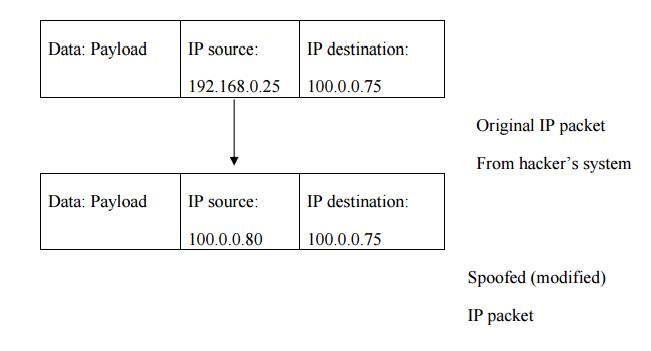 ü This is another form of the brute force attack noted above for guessing passwords.

ü The dictionary attack narrows the field by selecting specific accounts to attack and uses a list of commonly used passwords instead of random combinations.

ü The attacker sends a large number of connection or information requests to a target.

ü This may result in the system crashing, or simply becoming unable to perform ordinary functions.

ü DDOS is an attack in which a coordinated stream of requests is launched dagainst a target from many locations at the same.

ü An attacker monitors packets from the network, modifies them, and inserts them back into the network.

· It has been used to make malicious code attacks more effective.

· Spam is considered as a trivial nuisance rather than an attack.

· It is the waste of both computer and human resources it causes by the flow of unwanted E-mail.

ü Another form of E-mail attack that is also a DOS called a mail bomb.

ü Attacker routes large quantities of e-mail to the target.

ü The target of the attack receives unmanageably large volumes of unsolicited e-mail.

ü By sending large e-mails, attackers can take advantage of poorly configured e-mail systems on the Internet and trick them into sending many e-mails to an address chosen by the attacker.

ü The target e-mail address is buried under thousands or even millions of unwanted e-mails.

ü A sniffer is a program or device that can monitor data traveling over a network.

ü Unauthorized sniffers can be extremely dangerous to a network’s security, because they are virtually impossible to detect and can be inserted almost anywhere.

ü Sniffer often  works  on  TCP/IP  networks,  where they are sometimes  called  “packet

2.5.3    It is the process of using social skills to convince people to reveal access credentials or other valuable information to the attacker.

2.5.4   An attacker gets more information by calling others in the company and asserting his/her authority by mentioning chief’s name.

ü A buffer overflow is an application error that occurs when more data is sent to a buffer than it can handle.

ü Works by exploring the contents of a web browser’s cache.

ü These attacks allow a Web designer to create a malicious form of cookie, that is stored on the client’s system.