Laws are rules that mandate or prohibit certain behavior in society; they are drawn from ethics, which define socially acceptable behaviors. The key difference between laws and ethics is that laws carry the sanctions of a governing authority and ethics do not. Ethics in turn are based on Cultural mores.

Computer Fraud and Abuse Act of 1986

Telecommunications Deregulation and Competition Act of 1996

ü The ability to collect information on an individual, combine facts from separate sources, and merge it with other information has resulted in databases of information that were previously impossible to set up 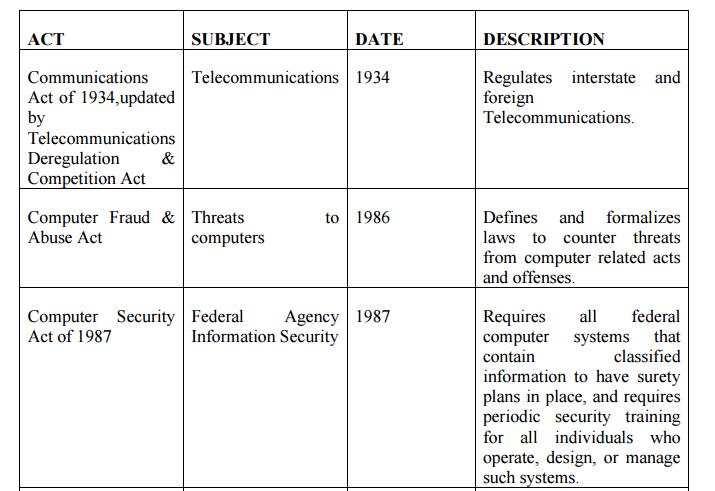 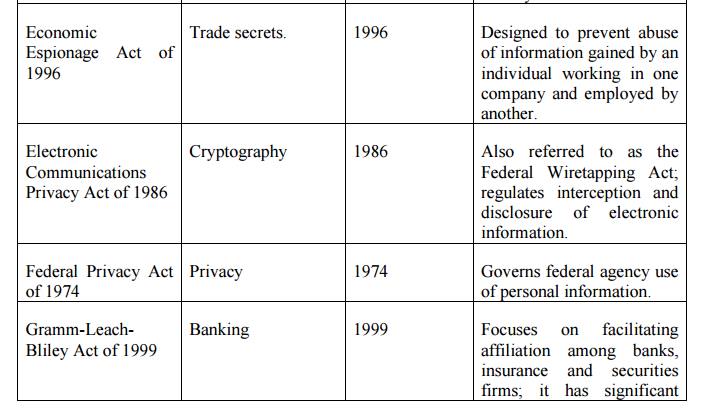 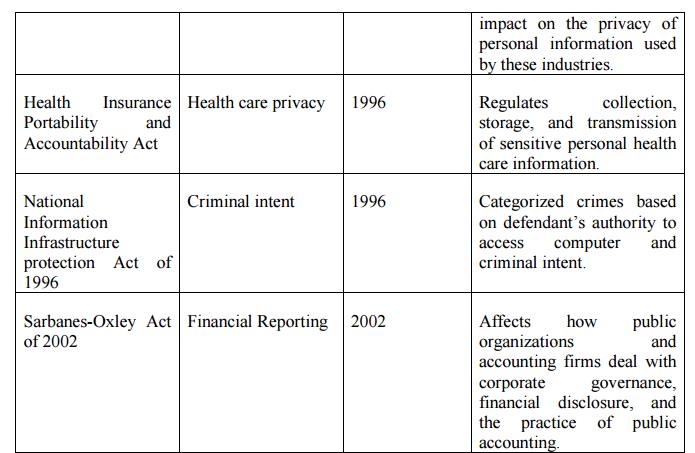 · Security and Freedom Through Encryption Act of 1997 (SAFE)

ü US copyright law extends this right to the published word, including electronic formats

the use to support news reporting, teaching, scholarship, and a number of other related permissions

the purpose of the use has to be for educational or library purposes, not for profit, and should not be excessive

Freedom of Information Act of 1966 (FOIA)

ü The Freedom of Information Act provides any person with the right to request access to federal agency records or information, not determined to be of national security

ü There are exceptions for information that is protected from disclosure, and the Act does not apply to state or local government agencies or to private businesses or individuals, although many states have their own version of the FOIA

ü In addition to the national and international restrictions placed on an organization in the use of computer technology, each state or locality may have a number of laws and regulations that impact operations

to create an international task force to oversee a range of security functions associated with Internet activities,

ü The Digital Millennium Copyright Act (DMCA) is the US version of an international effort to reduce the impact of copyright, trademark, and privacy infringement

ü IW is a relatively new application of warfare, although the military has been conducting electronic warfare and counter-warfare operations for decades, jamming, intercepting, and spoofing enemy communications

o   For a policy to become enforceable, it must be:

§  Distributed to all individuals who are expected to comply with it

§  Easily understood with multi-language translations and translations for visually impaired, or literacy-impaired employees

§  Acknowledged by the employee, usually by means of a signed consent form

o   Only when all conditions are met, does the organization have a reasonable expectation of effective policy

Employees must be trained and kept aware of a number of topics related to information security, not the least of which is the expected behaviors of an ethical employee

ü This is especially important in areas of information security, as many employees may not have the formal technical training to understand that their behavior is unethical or even illegal

Deterrence to Unethical and Illegal Behavior

ü Laws, policies, and technical controls are all examples of deterrents

ü Laws and policies only deter if three conditions are present:

Probability of being caught

Probability of penalty being administered