Security Forces in India can be divided into

The President of India being the head of the State occupies the highest position in our defence organisation. He is the supreme commander of the Armed forces in India.

Security Forces in India can be divided into

Indian Armed Forces – They are primary forces consist of country’s Army, Navy, Air Force and Coast guard. They serve under the Ministry of Defence.

Paramilitary Forces – They are Assam Rifles and Special Frontier Force.

Central Armed Police Forces – They are BSF, CRPF, ITBP, CISF and SSB. They serve under the authority of Ministry of Home Affairs. CAPF work along with both Army and Police in different roles assigned to them.

The Indian Army is the land-based branch and it the largest volunteer army in the world. It is commanded by the Chief of Army Staff (COAS), who is a four-star general. The primary mission of the Indian Army is to ensure national security, national unity, defending the nation from external aggression, internal threats and maintaining peace and security within its borders. It conducts humanitarian rescue operations during natural disaster and calamities. The Indian Army has a regimental system. It is operationally and geographically divided into seven commands.

The National War Memorial is a monument built by the Government of India to honour the Indian Armed Forces. The memorial is spread over 40 acres of land and is built around the existing chhatri (canopy) near India Gate, New Delhi. The names of armed forces personnel martyred during the conflicts are inscribed on the memorial walls. 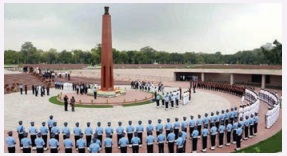 The primary objective of the navy is to safeguard the nation's maritime borders, and in conjunction with other Armed Forces of the union, act to deter or defeat any threats or aggression against the territory, people or maritime interests of India. The Chief of Naval Staff, a four-star Admiral, commands the navy. It has three Naval Commands.

The Indian Air Force is the air arm of the Indian armed forces. Its primary mission is to secure Indian airspace and to conduct aerial warfare during armed conflict. The Chief of Air Staff, an air chief marshal, is a four-star officer and is responsible for the bulk of operational command of the Air Force. It has seven commands. 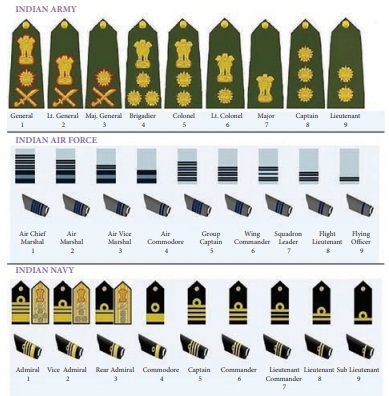 The Forces which help in maintaining internal security, protecting the coastline and assisting the army are known as “Paramilitary Forces”. The responsibility is the security of important places like Railway stations, Oil fields and refineries, water reservoirs lines. They also participate in the management of natural or man- made disasters.

Field Marshal – is a Five Star General officer rank and the highest attainable rank in the Indian Army.

Arjan Singh was the first and the only offi ce of the Indian Air Force to be promoted to Five Star Rank as Marshal.

The Madras Regiment is one of the oldest infantry regiment of the Indian Army, originating in the year 1758. The Regimental Centre is at wellington, Udhagamandalam, Tamil Nadu.

In 1962, after the Sino-Indian War, the need to expand the number of officers was felt. Two Officers Training Schools (OTS) were established in Pune and Chennai to train officers for Emergency Commission into the Army. On 1st January 1988, the school was renamed as the Officers Training Academy (OTA).

During peace time, the paramilitary forces also have the responsibility of protecting the international borders.

The Assam Rifles came into being in 1835 which was established by the British in the Assam region, as a militia called the ‘Cachar Levy’. There are currently 46 battalions of Assam Rifles. It is under the Ministry of Home Affairs (MHA).

The Special Frontier Force (SFF) is a paramilitary special force of India created in 1962. This force was put under the direct supervision of the Intelligence Bureau, and later, under the Research and Analysis Wing, India's external intelligence agency.

Following five forces which come under Ministry of Home Affairs were earlier considered paramilitary forces, but from March’ 2011, They have been reclassifled as Central Armed Police Forces (CAPF) to avoid confusion.

In 1025 AD (CE), Rajendra Chola I, the Chola king from Tamil Nadu launched naval on the city-state of expedition Srivijaya in maritime Southeast Asia, and conquered Kadaram (modern Kedah). Rajendra's overseas expedition against Srivijaya was a unique event in India's history.

The mission of Central Reserve Police force shall be to enable the government to maintain Rule of law, public order and internal security effectively and efficiently, to preserve national integrity and promote social harmony and development by upholding supremacy of the Constitution.

The Rapid Action Force is a specialised wing of the CRPF (Central Reserve Police Force) to deal with riot, crowd control, rescue and relief operations, and related unrest situations.

It is a border guarding police force. This force is specialized in high altitude operations. It is deployed for border guarding duties from Ladakh to Arunachal Pradesh (India – China border).

The border security force is a Border Guarding Force of India. BSF is charged with guarding India's land border during peace time and preventing transnational crimes.

National Cadet Corps is a Tri-Services Organization, comprising the Army, Navy and Air Force, engaged in grooming the youth of the country into disciplined and patriotic citizens. The National Cadet Corps in India is a voluntary organization which recruits cadets from high schools, colleges and universities all over India. The Cadets are given basic military training in small arms and parades.

The Central Industrial Security Force was set up under an Act of the Parliament of India on 10th March 1969. Its duties are guarding sensitive governmental buildings, the Delhi Metro, and providing airport security.

Sashastra Seema Bal (SSB), in English the Armed Border Force is the border guardening force for Nepal and Bhutan border.

The Indian Home Guard is a voluntary force, tasked as an auxiliary to the Indian Police.

Home Guards are recruited from various cross sections of the civil society such as professionals, college students, agricultural and industrial workers, etc. who give their spare time for betterment of the community. All citizens of India, in the age group of 18–50, are eligible. Normal tenure of membership in Home Guards is three to five years.

To protect and guard our nation, our armed forces are always kept ready. Youth should come forward to service and save the nation by joining the armed forces. Recruitment to the Defence services is open to all Indians. It is the duty of every citizen to have an opportunity to serve the country.