A foreign policy is a set of political goals that define how a sovereign country will interact with other countries in the world.

A foreign policy is a set of political goals that define how a sovereign country will interact with other countries in the world. It seeks to secure the best interest of the people, territory and economy of the country. Our country’s external relation is based on certain principles and policies. India’s foreign policy was evolved with the background of her colonial sufferings.

* Abolition of Colonialism, Racism and Imperialism

* Incresing the number of friendly nations

Jawaharlal Nehru, the first Prime Minister of India was the chief architect of India’s foreign policy. Nehru was a supporter of world peace. Hence he gave utmost importance to world peace in his policy planning. He declared the five principles of peace, known as Panchsheel.

1. Mutual respect for each other’s territorial integrity and sovereignty

The word Non-Alignment was coined by V.K. Krishna Menon. Non-alignment has been regarded as the most important feature of India’s foreign policy. Non-alignment aimed to maintain national independence in foreign affairs by not joining any military alliance formed by the USA or Soviet Union in the aftermath of the Second World War. Non-alignment was neither neutrality nor non-involvement nor isolationism. It was a dynamic concept which meant not committing to any military bloc but taking an independent stand on international issues.

The founding fathers of Non-Aligned Movement: Jawaharlal Nehru of India, Tito of Yugoslavia, Nasser of Egypt, Sukarno of Indonesia, and Kwame Nkumarah of Ghana.

India’s position is unique in its neighbourhood. India has always favoured international and regional cooperation, because she believes that through cooperation all disputes and problems among nations can be sorted out peacefully. India's foreign policy is based on the principle of developing friendly relations and cooperation with her neighbours.

India is a vast country with

• Pakistan and Afghanistan to the north-west

• China, Nepal, Bhutan to the north

• Bangladesh to the east

• Myanmar to the far east 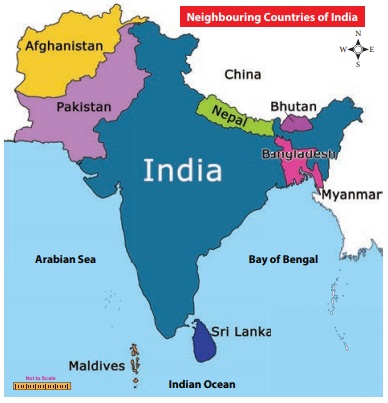 It is part of India’s foreign policy that actively focuses on improving ties with India’s immediate neighbours. India provides neighbours with support as needed in the form of resources, equipment and training. Greater connectivity and integration is provided so as to improve the free flow of goods, people, energy, capital and information.

South East Asia begins with North East India. Myanmar is our land bridge to the countries of the Association of the Southeast Asian Nations (ASEAN). The purpose is to ensure a stable and multipolar balance of power in the Indo-Pacific and to become an integral part of Asia.

India is actively engaged in general economic diplomacy with its neighbouring countries as below.

Bangladesh – Bhutan - India – Nepal has signed a framework to enable movement of passengers, cargo vehicles and for energy development.

To summarise, India is a huge country with manifold cultures. It has high status in the South East Asia. India’s foreign policy is to maintain peace, freedom and mutual co-operation among the nations. Though India is not in any major military alliance, our relations with the major powers have acquired a strategic depth.