Passive attacks are in the nature of eavesdropping on, or monitoring of, transmis-sions. The goal of the opponent is to obtain information that is being transmitted.

Two types of passive attacks are the release of message contents and traffic analysis.

The release of message contents is easily understood (Figure 1.2a). A telephone conversation, an electronic mail message, and a transferred file may contain sensitive or confidential information. We would like to prevent an opponent from learning the contents of these transmissions.

A second type of passive attack, traffic analysis, is subtler (Figure 1.2b). Suppose that we had a way of masking the contents of messages or other information traffic so that opponents, even if they captured the message, could not extract the information from the message. The common technique for masking contents is encryption. If we had encryption protection in place, an opponent might still be able to observe the pattern of these messages. The opponent could determine the location and identity of communicating hosts and could observe the frequency and length of messages being exchanged. This information might be useful in guessing the nature of the communication that was taking place.

Passive attacks are very difficult to detect, because they do not involve any alteration of the data. Typically, the message traffic is sent and received in an appar-ently normal fashion, and neither the sender nor receiver is aware that a third party has read the messages or observed the traffic pattern. However, it is feasible to pre-vent the success of these attacks, usually by means of encryption. Thus, the empha-sis in dealing with passive attacks is on prevention rather than detection.

Active attacks involve some modification of the data stream or the creation of a false stream and can be subdivided into four categories: masquerade, replay, modification of messages, and denial of service.

A masquerade takes place when one entity pretends to be a different entity (Figure 1.3a). A masquerade attack usually includes one of the other forms of active attack. For example, authentication sequences can be captured and replayed after a valid authentication sequence has taken place, thus enabling an authorized entity with few privileges to obtain extra privileges by impersonating an entity that has those privileges.

Replay involves the passive capture of a data unit and its subsequent retrans-mission to produce an unauthorized effect (Figure 1.3b).

The denial of service prevents or inhibits the normal use or management of communications facilities (Figure 1.3d). This attack may have a specific target; for example, an entity may suppress all messages directed to a particular destination 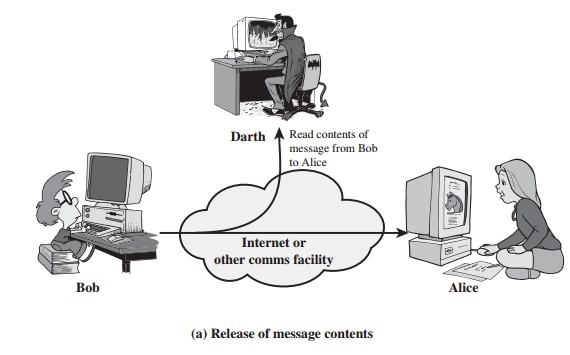 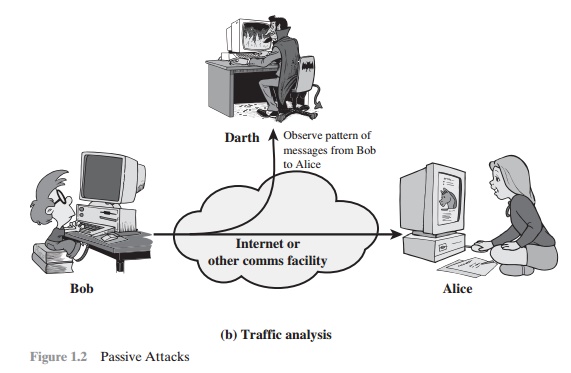 (e.g., the security audit service). Another form of service denial is the disruption of an entire network, either by disabling the network or by overloading it with messages so as to degrade performance. 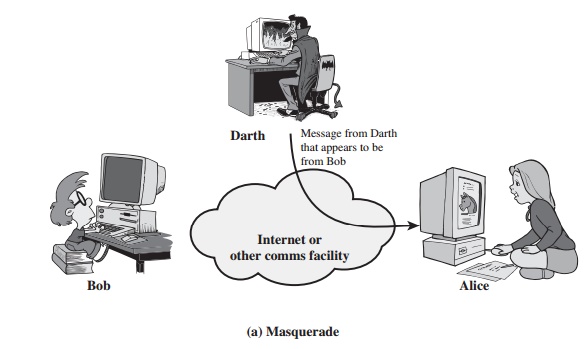 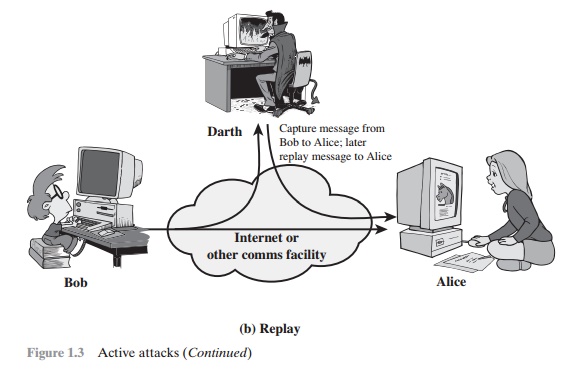 On the other hand, it is quite difficult to prevent active attacks absolutely because of the wide variety of potential physical, software, and network vulnerabilities. Instead, the goal is to detect active attacks and to recover from any disruption or delays caused by them. If the detection has a deterrent effect, it may also contribute to prevention. 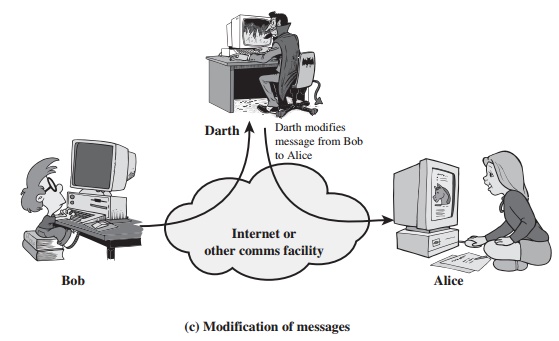 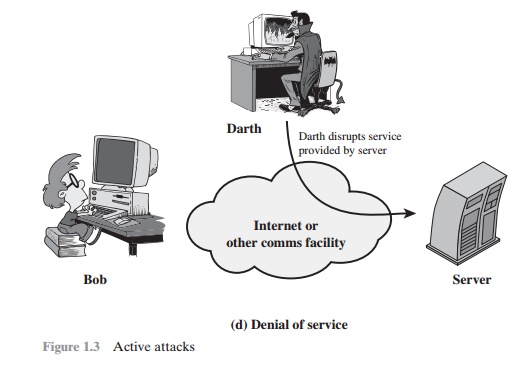