A Model For Network Security

A MODEL FOR NETWORK SECURITY 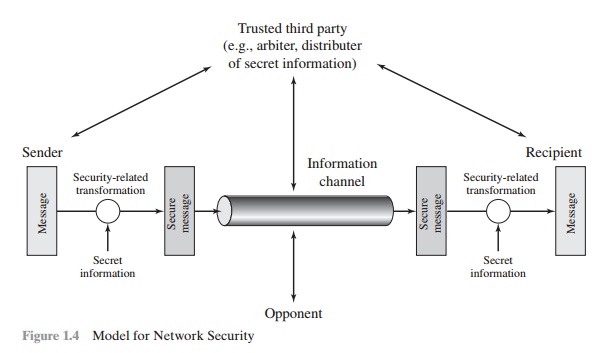 This general model shows that there are four basic tasks in designing a particular security service:

Parts One through Five of this book concentrate on the types of security mecha-nisms and services that fit into the model shown in Figure 1.4. However, there are other security-related situations of interest that do not neatly fit this model but are consid-ered in this book. A general model of these other situations is illustrated by Figure 1.5, which reflects a concern for protecting an information system from unwanted access. Most readers are familiar with the concerns caused by the existence of hackers, who attempt to penetrate systems that can be accessed over a network. The hacker can be someone who, with no malign intent, simply gets satisfaction from breaking and entering a computer system. The intruder can be a disgruntled employee who wishes to do damage or a criminal who seeks to exploit computer assets for financial gain

Another type of unwanted access is the placement in a computer system of logic that exploits vulnerabilities in the system and that can affect application pro-grams as well as utility programs, such as editors and compilers. Programs can pre-sent two kinds of threats:

•             Information access threats: Intercept or modify data on behalf of users who should not have access to that data.

•             Service threats: Exploit service flaws in computers to inhibit use by legitimate users.

Viruses and worms are two examples of software attacks. Such attacks can be introduced into a system by means of a disk that contains the unwanted logic con-cealed in otherwise useful software. They can also be inserted into a system across a network; this latter mechanism is of more concern in network security.

The security mechanisms needed to cope with unwanted access fall into two broad categories (see Figure 1.5). The first category might be termed a gatekeeper function. It includes password-based login procedures that are designed to deny access to all but authorized users and screening logic that is designed to detect and reject worms, viruses, and other similar attacks. Once either an unwanted user or unwanted software gains access, the second line of defense consists of a variety of internal controls that monitor activity and analyze stored information in an attempt to detect the presence of unwanted intruders. These issues are explored in Part Six.