Netscape originated SSL. Version 3 of the protocol was designed with public review and input from industry and was published as an Internet draft document. Subsequently, when a consensus was reached to submit the protocol for Internet standardization, the TLS working group was formed within IETF to develop a common standard. This first published version of TLS can be viewed as essentially an SSLv3.1 and is very close to and backward compatible with SSLv3.

This section is devoted to a discussion of SSLv3. In the next section, the principal differences between SSLv3 and TLS are described.

SSL is designed to make use of TCP to provide a reliable end-to-end secure service. SSL is not a single protocol but rather two layers of protocols, as illustrated in Figure 16.2.

The SSL Record Protocol provides basic security services to various higher- layer protocols. In particular, the Hypertext Transfer Protocol (HTTP), which pro- vides the transfer service for Web client/server interaction, can operate on top of SSL. Three higher-layer protocols are defined as part of SSL: the Handshake Protocol, The Change Cipher Spec Protocol, and the Alert Protocol. These SSL-spe- cific protocols are used in the management of SSL exchanges and are examined later in this section.

Two important SSL concepts are the SSL session and the SSL connection, which are defined in the specification as follows. 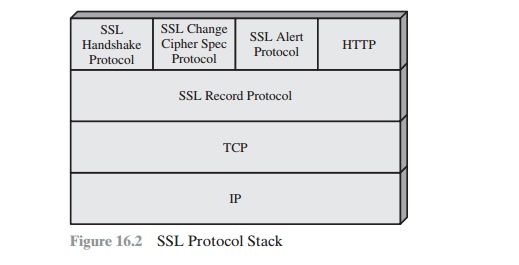 Between any pair of parties (applications such as HTTP on client and server), there may be multiple secure connections. In theory, there may also be multiple simultaneous sessions between parties, but this feature is not used in practice.

A session state is defined by the following parameters.

A connection state is defined by the following parameters.

•                           Initialization vectors: When a block cipher in CBC mode is used, an initializa- tion vector (IV) is maintained for each key. This field is first initialized by the SSL Handshake Protocol. Thereafter, the final ciphertext block from each record is preserved for use as the IV with the following record.

•                 Confidentiality: The Handshake Protocol defines a shared secret key that is used for conventional encryption of SSL payloads.

Figure 16.3 indicates the overall operation of the SSL Record Protocol. The Record Protocol takes an application message to be transmitted, fragments the data into manageable blocks, optionally compresses the data, applies a MAC, encrypts, adds a header, and transmits the resulting unit in a TCP segment. Received data are decrypted, verified, decompressed, and reassembled before being delivered to higher-level users.

The next step in processing is to compute a message authentication code over the compressed data. For this purpose, a shared secret key is used. The calculation is defined as 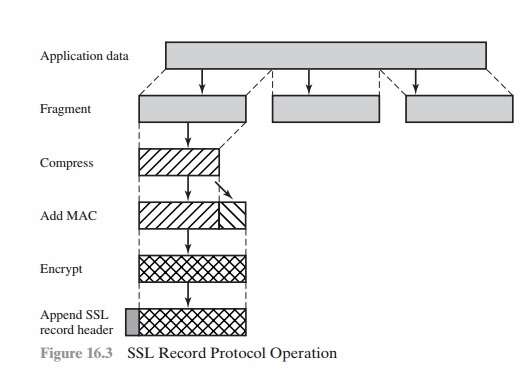 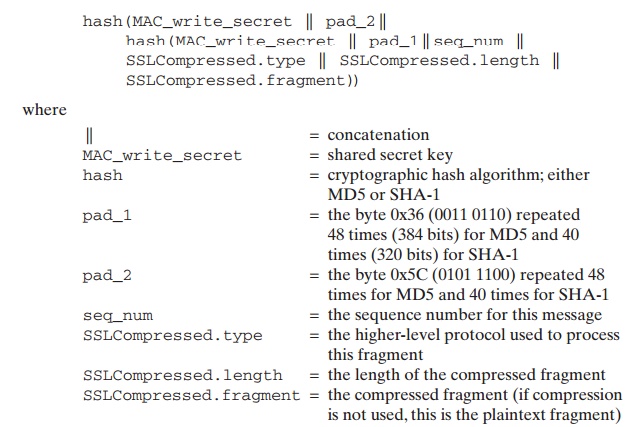 Note that this is very similar to the HMAC algorithm defined in Chapter 12. The difference is that the two pads are concatenated in SSLv3 and are XORed in HMAC. The SSLv3 MAC algorithm is based on the original Internet draft for HMAC, which used concatenation. The final version of HMAC (defined in RFC 2104) uses the XOR. Next, the compressed message plus the MAC are encrypted using symmetric encryption. Encryption may not increase the content length by more than 1024 bytes, so that the total length may not exceed 214 + 2048. The following encryption algorithms are permitted:

Fortezza can be used in a smart card encryption scheme.

For block encryption, padding may be added after the MAC prior to encryp- tion. The padding is in the form of a number of padding bytes followed by a one-byte indication of the length of the padding. The total amount of padding is the smallest amount such that the total size of the data to be encrypted (plaintext plus MAC plus padding) is a multiple of the cipher’s block length. An example is a plaintext (or compressed text if compression is used) of 58 bytes, with a MAC of 20 bytes (using SHA-1), that is encrypted using a block length of 8 bytes (e.g., DES). With the padding-length byte, this yields a total of 79 bytes. To make the total an integer multiple of 8, one byte of padding is added.

The final step of SSL Record Protocol processing is to prepare a header consisting of the following fields:

The content types that have been defined are change_cipher_spec, alert, handshake, and application_data. The first three are the SSL-specific protocols, discussed next. Note that no distinction is made among the various appli- cations (e.g., HTTP) that might use SSL; the content of the data created by such applications is opaque to SSL.

The Change Cipher Spec Protocol is one of the three SSL-specific protocols that use the SSL Record Protocol, and it is the simplest. This protocol consists of a single message (Figure 16.5a), which consists of a single byte with the value 1. The sole pur- pose of this message is to cause the pending state to be copied into the current state, which updates the cipher suite to be used on this connection. 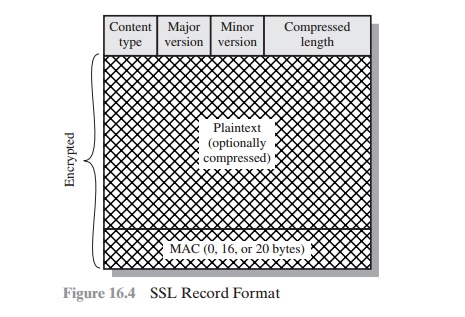 The Alert Protocol is used to convey SSL-related alerts to the peer entity. As with other applications that use SSL, alert messages are compressed and encrypted, as specified by the current state.

Each message in this protocol consists of two bytes (Figure 16.5b). The first byte takes the value warning (1) or fatal (2) to convey the severity of the message. If the level is fatal, SSL immediately terminates the connection. Other connections on the same session may continue, but no new connections on this session may be established. The second byte contains a code that indicates the specific alert. First,  we list those alerts that are always fatal (definitions from the SSL   specification):

The remaining alerts are the following.

The most complex part of SSL is the Handshake Protocol. This protocol allows the server and client to authenticate each other and to negotiate an encryption and MAC algorithm and cryptographic keys to be used to protect data sent in an SSL record. The Handshake Protocol is used before any application data is transmitted.

The Handshake Protocol consists of a series of messages exchanged by client and server. All of these have the format shown in Figure 16.5c. Each message has three fields:

Figure 16.6 shows the initial exchange needed to establish a logical connection between client and server. The exchange can be viewed as having four phases.

PHASE 1. ESTABLISH SECURITY CAPABILITIES This phase is used to initiate a logical connection and to establish the security capabilities that will be associated with it. The exchange is initiated by the client, which sends a client_hello message with the following parameters:

(j)                          Random: A client-generated random structure consisting of a 32-bit timestamp and 28 bytes generated by a secure random number generator. These values serve as nonces and are used during key exchange to prevent replay attacks. 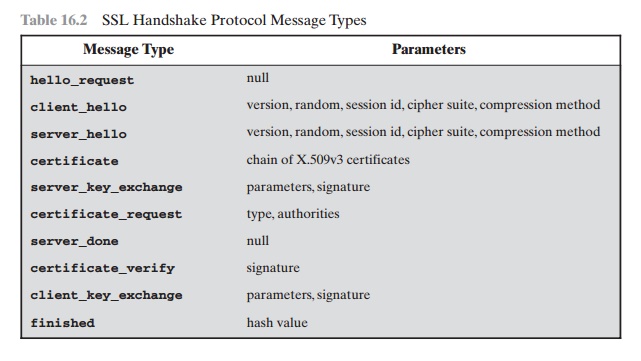 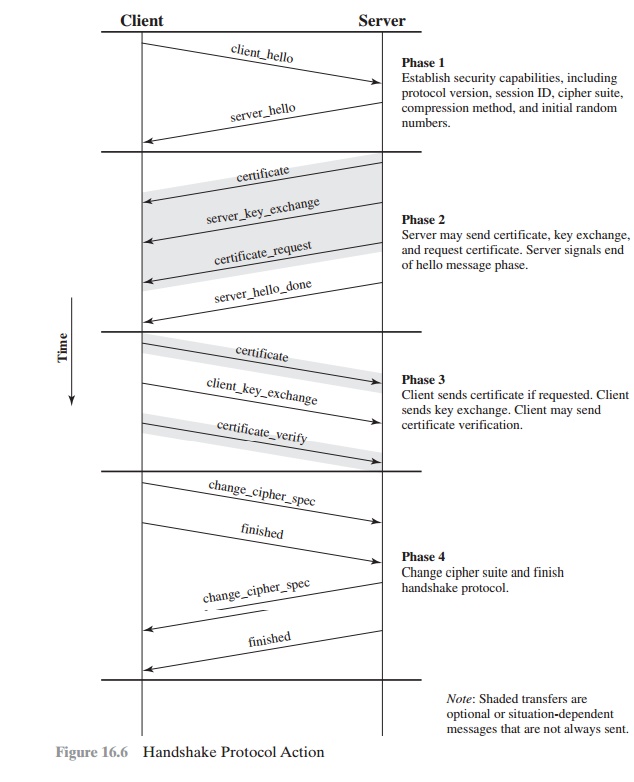 •                          CipherSuite: This is a list that contains the combinations of cryptographic algorithms supported by the client, in decreasing order of preference. Each element of the list (each cipher suite) defines both a key exchange algorithm and a CipherSpec; these are discussed subsequently.

Following the definition of a key exchange method is the CipherSpec, which includes the following fields.

Some further details about the signatures are warranted. As usual, a signature is created by taking the hash of a message and encrypting it with the sender’s private key. In this case, the hash is defined as

So the hash covers not only the Diffie-Hellman or RSA parameters but also the two nonces from the initial hello messages. This ensures against replay attacks and misrepresentation. In the case of a DSS signature, the hash is performed using the SHA-1 algorithm. In the case of an RSA signature, both an MD5 and an SHA-1 hash are calculated, and the concatenation of the two hashes (36 bytes) is encrypted with the server’s private key.

•                 RSA for fixed Diffie-Hellman; in this case the signature is used only for authentication, by sending a certificate signed with RSA

The second parameter in the certificate_request message is a list of the distinguished names of acceptable certificate authorities.

The final message in phase 2, and one that is always required, is the server_done message, which is sent by the server to indicate the end of the server hello and associated messages. After sending this message, the server will wait for a client response. This message has no parameters.

Next is the client_key_exchange message, which must be sent in this phase. The content of the message depends on the type of key exchange, as   follows.

•                 RSA: The client generates a 48-byte pre-master secret and encrypts with the public key from the server’s certificate or temporary RSA key from a server_key_exchange message. Its use to compute a master secret is explained later.

where pad_1 and pad_2 are the values defined earlier for the MAC, handshake_messages refers to all Handshake Protocol messages sent or received starting at client_hello but not including this message, and master_secret is the calculated secret whose construction is explained later in this section. If the user’s private key is DSS, then it is used to encrypt the SHA-1 hash. If the user’s private key is RSA, it is used to encrypt the concatenation of the MD5 and SHA-1 hashes. In either case, the purpose is to verify the client’s owner- ship of the private key for the client certificate. Even if someone is misusing the client’s certificate, he or she would be unable to send this message.

PHASE 4. FINISH This phase completes the setting up of a secure connection. The client sends a change_cipher_spec message and copies the pending CipherSpec into the current CipherSpec. Note that this message is not considered part of the Handshake Protocol but is sent using the Change Cipher Spec Protocol. The client then immediately sends the finished message under the new algorithms, keys, and secrets. The finished message verifies that the key exchange and authentication processes were successful. The content of the finished message is the concatenation of two hash values:

where Sender is a code that identifies that the sender is the client and handshake_messages is all of the data from all handshake messages up to but not including this message.

In response to these two messages, the server sends its own change_cipher_spec message, transfers the pending to the current CipherSpec, and sends its finished message. At this point, the handshake is complete and the client and server may begin to exchange application-layer data.

Two further items are of interest: (1) the creation of a shared master secret by means of the key exchange and (2) the generation of cryptographic parameters from the master secret.

MASTER SECRET  CREATION  The shared master secret is a one-time 48-byte value  (384 bits) generated for this session by means of secure key exchange. The creation   is in two stages. First, a pre_master_secret is exchanged. Second, the master_secret is calculated by both parties. For pre_master_secret exchange, there are two possibilities.

Both sides now compute the master_secret as

where ClientHello.random and ServerHello.random are the two nonce values exchanged in the initial hello  messages.

until enough output has been generated. The result of this algorithmic structure is a pseudorandom function. We can view the master_secret as the pseudorandom seed value to the function. The client and server random numbers can be viewed as salt values to complicate cryptanalysis (see Chapter 20 for a discussion of the use of salt values).