TLS is an IETF standardization initiative whose goal is to produce an Internet standard version of SSL. TLS is defined as a Proposed Internet Standard in RFC 5246. RFC 5246 is very similar to SSLv3. In this section, we highlight the differences.

The TLS Record Format is the  same  as  that  of  the  SSL  Record  Format  (Figure 16.4), and the fields in the header have the same meanings. The one differ- ence is in version values. For the current version of TLS, the major version is 3 and the minor version is 3.

There are two differences between the SSLv3 and TLS MAC schemes: the actual algorithm and the scope of the MAC calculation. TLS makes use of the HMAC algorithm defined in RFC 2104. Recall from Chapter 12 that HMAC is defined as

For TLS, the MAC calculation encompasses the fields indicated in the following expression:

The MAC calculation covers all of the fields covered by the SSLv3 calculation, plus the field TLSCompressed.version, which is the version of the protocol being employed.

TLS makes use of a pseudorandom function referred to as PRF to expand secrets into blocks of data for purposes of key generation or validation. The objective is to make use of a relatively small shared secret value but to generate longer blocks of data in a way that is secure from the kinds of attacks made on hash functions and MACs. The PRF is based on the data expansion function (Figure 16.7) given as 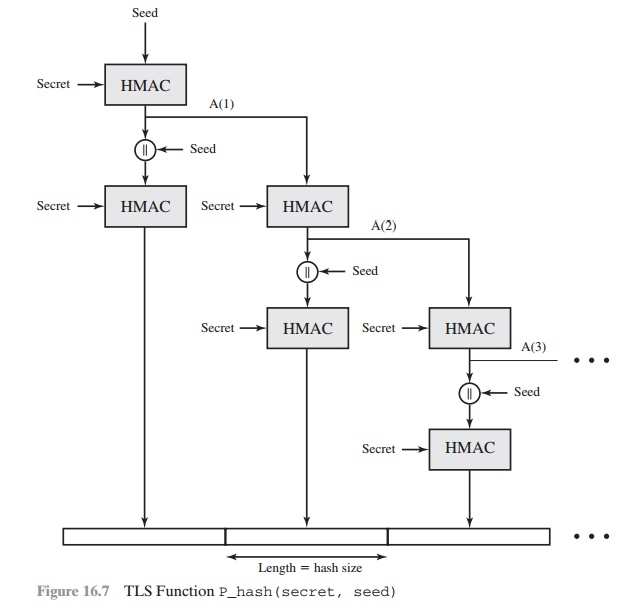 The data expansion function makes use of the HMAC algorithm with either MD5 or SHA-1 as the underlying hash function. As can be seen, P_hash can be iterated as many times as necessary to produce the required quantity of data. For example, if P_SHA-1 was used to generate 64 bytes of data, it would have to be iterated four times, producing 80 bytes of data of which the last 16 would be dis- carded. In this case, P_MD5 would also have to be iterated four times, producing exactly 64 bytes of data. Note that each iteration involves two executions of HMAC—each of which in turn involves two executions of the underlying hash algorithm.

To make PRF as secure as possible, it uses two hash algorithms in a way that should guarantee its security if either algorithm remains secure. PRF is defined as

PRF takes as input a secret value, an identifying label, and a seed value and produces an output of arbitrary length.

TLS supports all of the alert codes defined in SSLv3 with the exception of no_certificate. A number of additional codes are defined in TLS; of these, the following are always fatal.

•                          insufficient_security: Returned instead of handshake_failure when a negotiation has failed specifically because the server requires ciphers more secure than those supported by the client.

•                          decrypt_error: A handshake cryptographic operation failed, including being unable to verify a signature, decrypt a key exchange, or validate a fin- ished message.

The remaining alerts include the following.

There are several small differences between the cipher suites available under SSLv3 and under TLS:

•                 Symmetric Encryption Algorithms: TLS includes all of the symmetric encryp- tion algorithms found in SSLv3, with the exception of  Fortezza.

TLS defines the following certificate types to be requested in a certificate_request message: rsa_sign, dss_sign, rsa_fixed_dh, and dss_fixed_dh. These are all defined in SSLv3. In addition, SSLv3 includes rsa_ephemeral_dh, dss_ephemeral_dh, and fortezza_kea. Ephemeral Diffie-Hellman involves signing the Diffie-Hellman parameters with either RSA or DSS. For TLS, the rsa_sign and dss_sign types are used for that function; a separate signing type is not needed to sign Diffie-Hellman parameters. TLS does    not include the Fortezza  scheme.

In the TLS certificate_verify message, the MD5 and SHA-1 hashes are calculated only over handshake_messages. Recall that for SSLv3, the hash calculation also included the master secret and pads. These extra fields were felt to add no additional security.

The algorithm is performed until 48 bytes of pseudorandom output are produced. The calculation of the key block material (MAC secret keys, session encryption keys, and IVs) is defined as

until enough output has been generated. As with SSLv3, the key_block is a func- tion of the master_secret and the client and server random numbers, but for TLS, the actual algorithm is different.

In SSL, the padding added prior to encryption of user data is the minimum amount required so that the total size of the data to be encrypted is a multiple   of the cipher’s block length. In TLS, the padding can be any amount that results in a total that is a multiple of the cipher’s block length, up to a maximum of 255 bytes. For example, if the plaintext (or compressed text if compression is used) plus MAC plus padding.length byte is 79 bytes long, then the padding length (in bytes) can be 1, 9, 17, and so on, up to 249. A variable padding length may be used to frustrate attacks based on an analysis of the lengths of exchanged messages.