The vascular cambium is the lateral meristem that produces the secondary vascular tissues.

The vascular cambium is the lateral meristem that produces the secondary vascular tissues. i.e., secondary xylem and secondary phloem.

Origin and Formation of Vascular Cambium 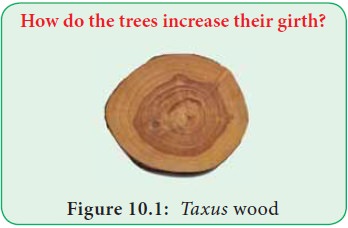 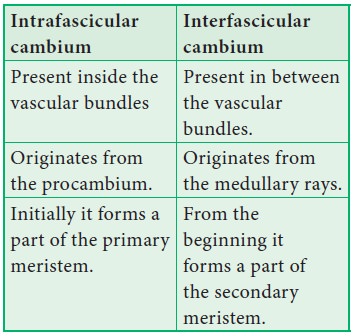 Further, the most important character of the vascular cambium is the presence of two kinds of initials, namely, fusiform initials and ray initials.

Based on the arrangement of the fusiform initials, two types of vascular cambium are recognized. 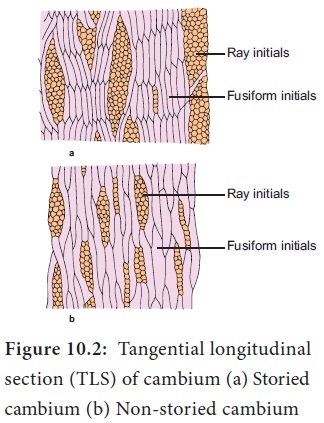 These are horizontally elongated cells. They give rise to the ray cells and form the elements of the radial system of secondary xylem and phloem.

The vascular cambial ring, when active, cuts off new cells both towards the inner and outer side. The cells which are produced outward form secondary phloem and inward secondary xylem. 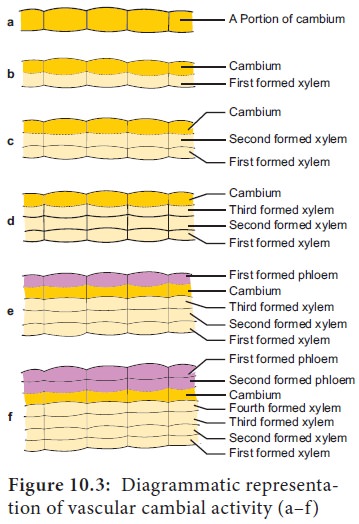 At places, cambium forms some narrow horizontal bands of parenchyma which passes through secondary phloem and xylem. These are the rays.

The secondary xylem varies very greatly from species to species with reference to relative distribution of the different cell types, density and other properties. It is of two types. 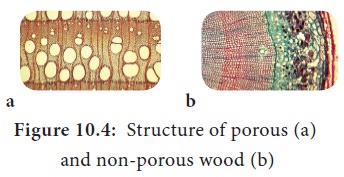 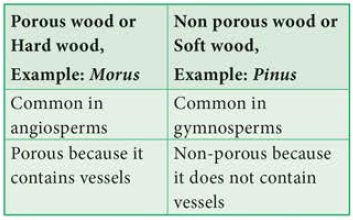 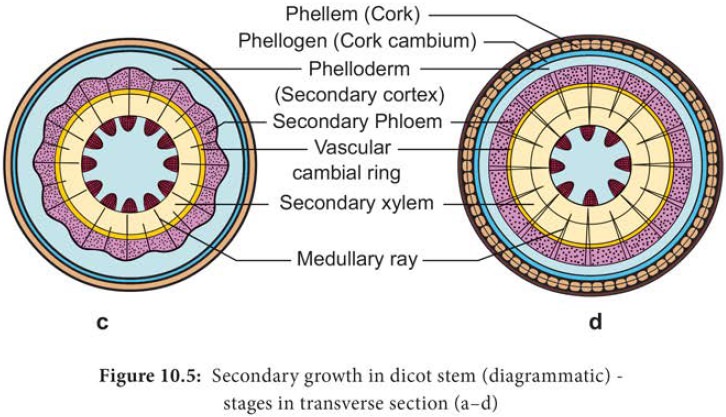 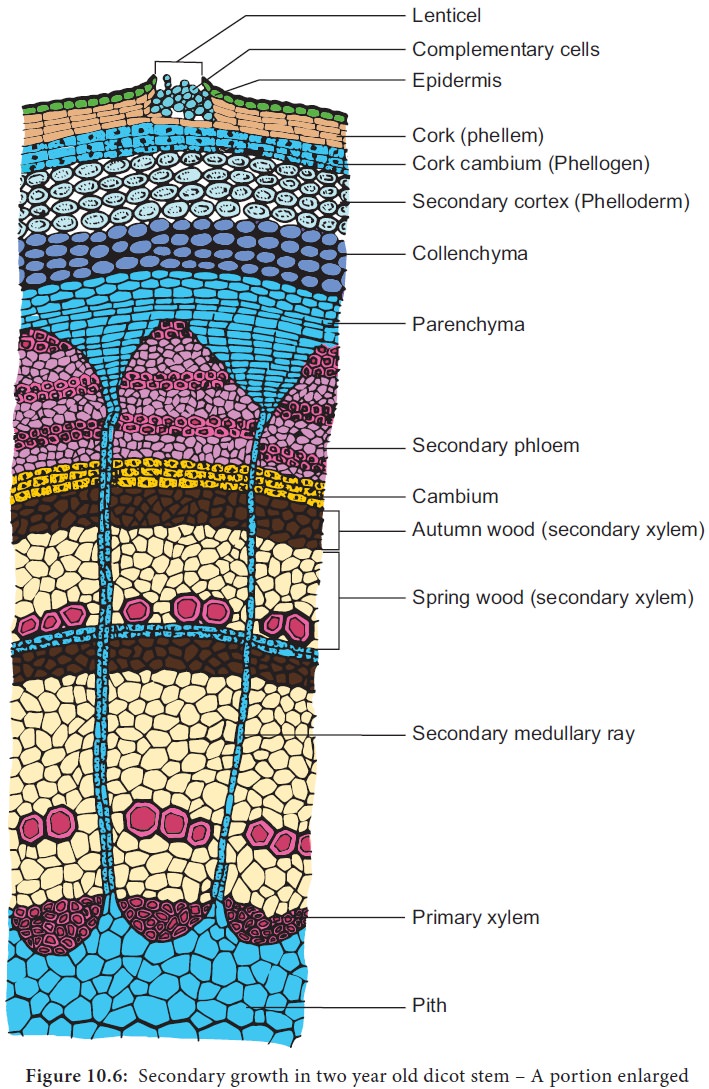 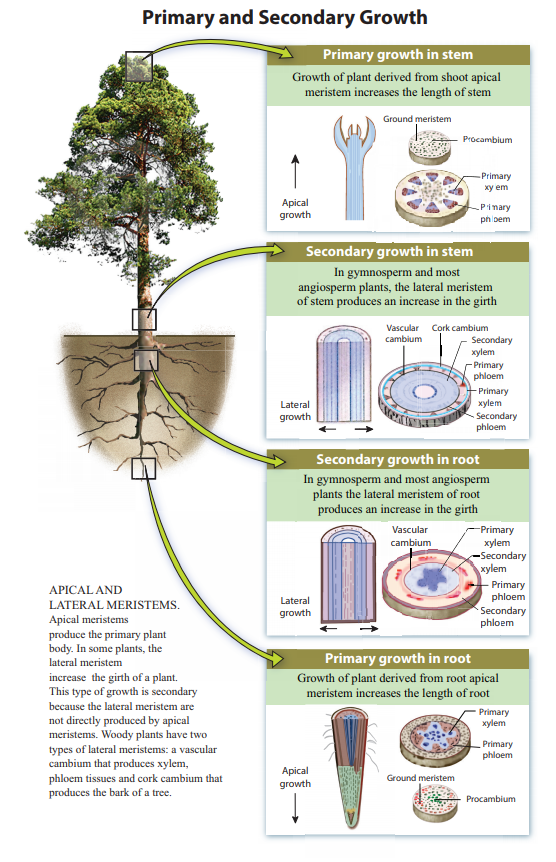 The activity of vascular cambium is under the control of many physiological and environmental factors. In temperate regions, the climatic conditions are not uniform throughout the year. In the spring season, cambium is very active and produces a large number of xylary elements having vessels/tracheids with wide lumen. The wood formed during this season is called spring wood or early wood. The tracheary elements are fairly thin walled. In winter, the cambium is less active and forms fewer xylary elements that have narrow vessels/ tracheids and this wood is called autumn wood or late wood.The treachery elements are with narrow lumen, very thick walled.

The spring wood is lighter in colour and has a lower density whereas the autumn wood is darker and has a higher density.

The annual ring denotes the combination of early wood and late wood and the ring becomes evident to our eye due to the high density of late wood.

Sometimes annual rings are called growth rings but it should be remembered all the growth rings are not annual. In some trees more than one growth ring is formed with in a year due to climatic changes.

Additional growth rings are developed within a year due to adverse natural calamities like drought, frost, defoliation, flood, mechanical injury and biotic factors during the middle of a growing season,which results in the formation of more than one annual ring. Such rings are called pseudo- or false- annual rings.

Each annual ring corresponds to one year’s growth and on the basis of these rings, the age of a particular plant can easily be calculated. The determination of the age of a tree by counting the annual rings is called dendrochronology.

It is a branch of dendrochronology concerned with constructing records of past climates and climatic events by analysis of tree growth characteristics, especially growth rings. 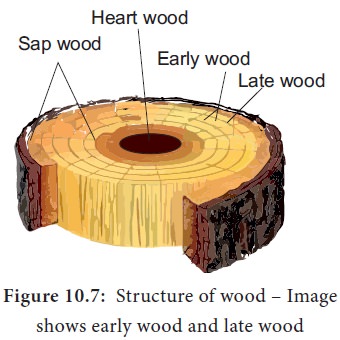 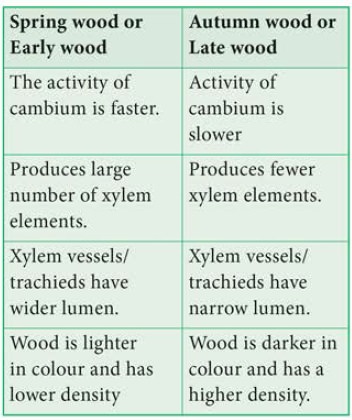 Another feature of wood related to seasonal changes is the diffuse porous and ring porous condition. On the basis of diameter of xylem vessels, two main types of angiosperm woods are recognized.

Diffuse porous woods are woods in which the vessels or pores are rather uniform in size and distribution throughout an annual ring.

The pores of the early wood are distinctly larger than those of the late wood. Thus rings of wide and narrow vessels occur. 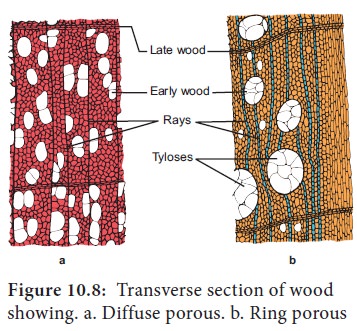 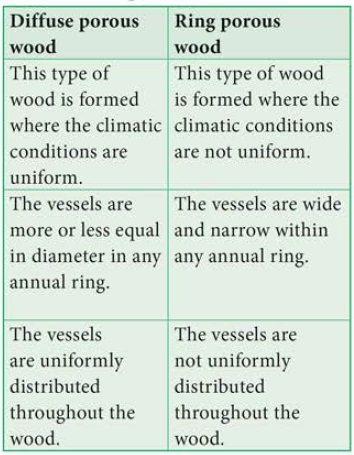 In many dicot plants, the lumen of the xylem vessels is blocked by many balloon-like  ingrowths from the neighbouring parenchymatous cells. These balloon-like structures are called tyloses. 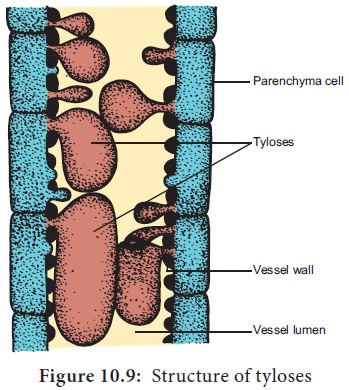 Usually, these structures are formed in secondary xylem vessels that have last their function i.e., in heart wood.

There are tylosoids in gymnosperms and angiosperms

In gymnosperms, the resin ducts are blocked by tylose-like ingrowths from the neighbouring resin producing parenchyamatous cells. Example: Pinus.

In angiosperms, the sieve tubes are blocked by tylose- like ingrowths from the neighbouring parenchyamatous cells. Example: Bombox.

Wood is also classified into sap wood and heart wood. 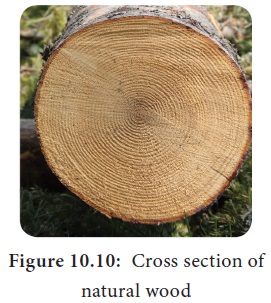 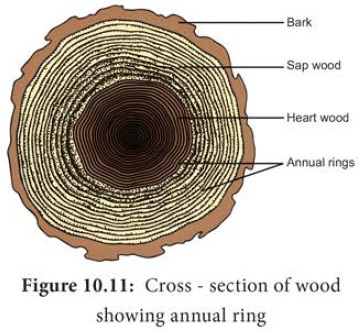 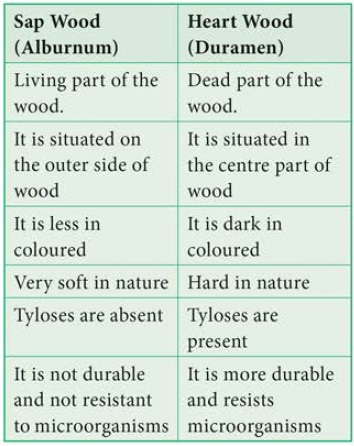 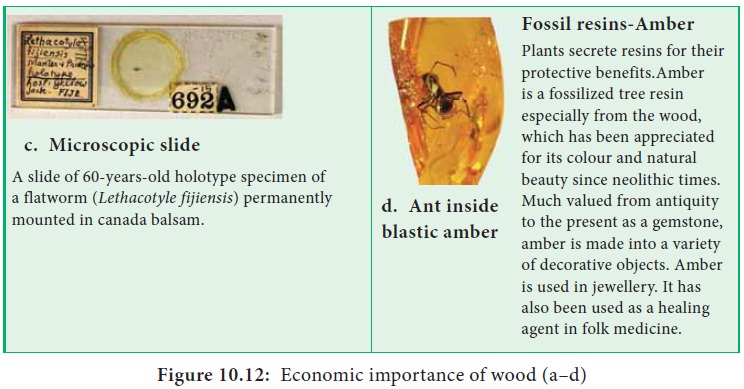 The vascular cambial ring produces secondary phloem or bast on the outer side of the vascular bundle.

Some commercially important phloem or bast fibres are obtained from the following plants.

Be friendly with your environment (Eco friendly) : Why should not we use the natural products which are made by plant fibres like rope, fancy bags, mobile pouch, mat and gunny bags etc., instead of using plastics or nylon?

Whenever stems and roots increase in thickness by secondary growth, the periderm, a protective tissue of secondary origin replaces the epidermis and often primary cortex. The periderm consists of phellem, phellogen, and phelloderm.

It is the protective tissue composed of non-living cells with suberized walls and formed centrifugally (outward) by the phellogen (cork cambium) as part of the periderm. It replaces the epidermis in older stems and roots of many seed plants. It is characterized by regularly arranged tiers and rows of cells. It is broken here and there by the presence of lenticels. 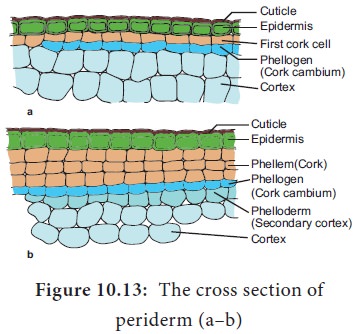 Phellem (Cork) like cells which lack suberin in their walls.

It is a secondary lateral meristem. It comprises homogenous meristematic cells unlike vascular cambium. It arises from epidermis, cortex, phloem or pericycle (extrastelar in origin). Its cells divide periclinally and produce radially arranged files of cells. The cells towards the outer side differentiate into phellem (cork) and those towards the inside as phelloderm (secondary cortex).

It is a tissue resembling cortical living parenchyma produced centripetally (inward) from the phellogen as a part of the periderm of stems and roots in seed plants. 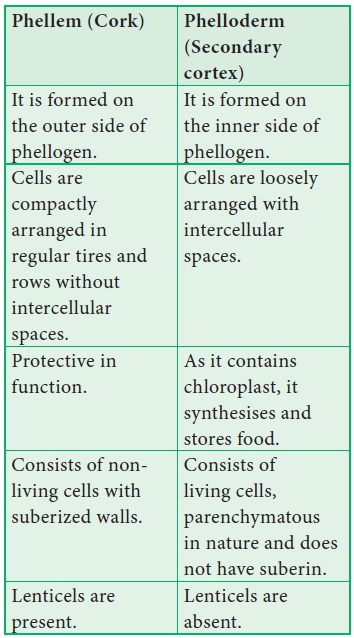 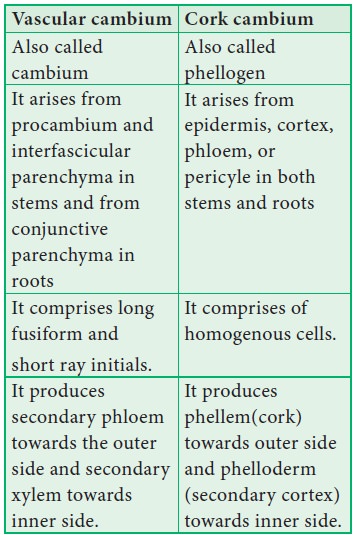 The term ‘bark’ is commonly applied to all the tissues outside the vascular cambium of stem (i.e., periderm, cortex, primary phloem and secondary phloem). Bark protects the plant from parasitic fungi and insects, prevents water loss by evaporation and guards against variations of external temperature. It is an insect repellent, decay proof, fireproof and is used in obtaining drugs or spices. The phloem cells of the bark are involved in conduction of food while secondary cortical cells involved in storage.

If the phellogen forms a complete cylinder around the stem, it gives rise to ring barks. Example: Quercus. When the bark is formed in overlapping scale like layers, it is known as scale bark. Example: Guava. While ring barks normally do not peeled off, scale barks peeled off. 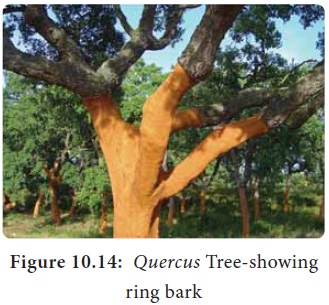 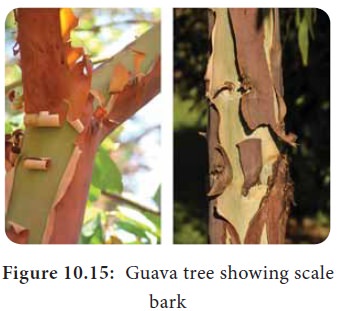 Lenticel is raised opening or pore on the epidermis or bark of stems and roots.

It is formed during secondary growth in stems. When phellogen is more active in the region of lenticels, a mass of loosely arranged thin-walled parenchyma cells are formed. It is called complementary tissue or filling tissue. 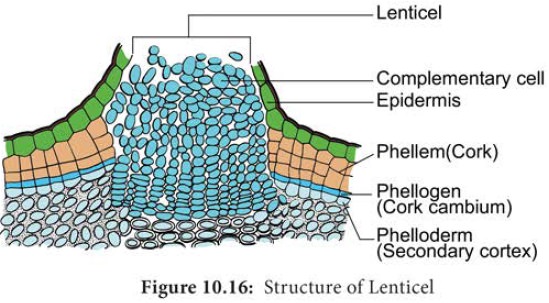 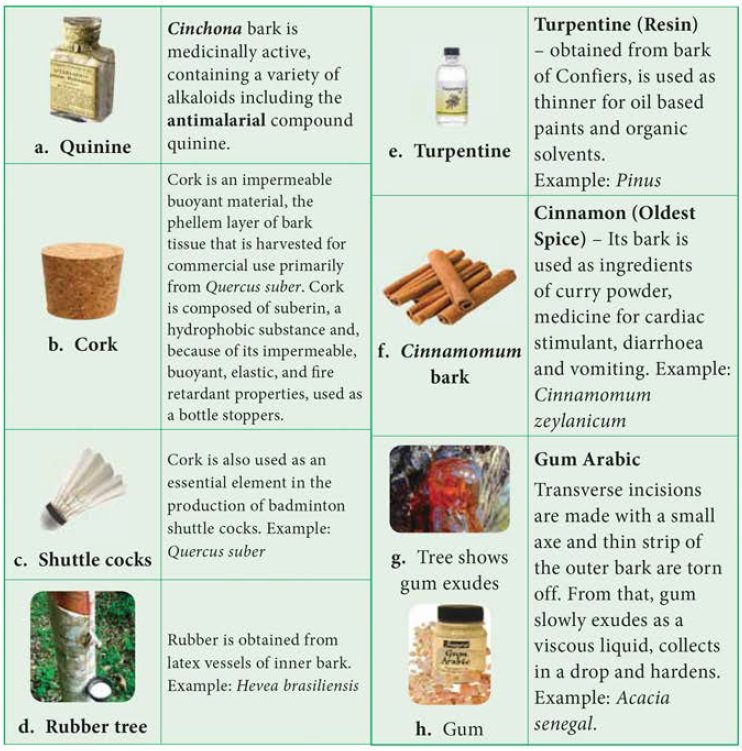