The second order landforms are categorised as mountains, plateaus and plains.

The second order landforms are categorised as mountains, plateaus and plains. 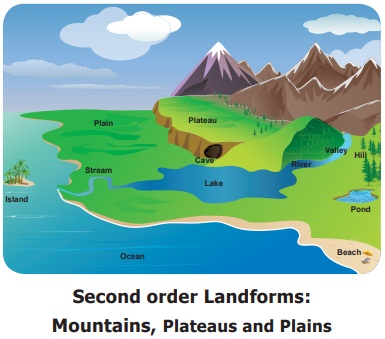 A landform that rises 600 metre above its surroundings and has steep slopes is called a mountain. Mountains are found in isolation or in groups. If the mountains extend for a larger area continuously, it is called a mountain range. These ranges stretch for hundreds or thousands of kilometre. The Himalayas of Asia, the Rocky Mountains of North America and the Andes of South America are such examples. 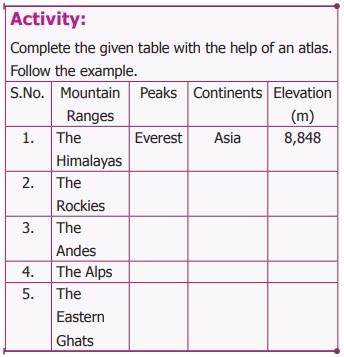 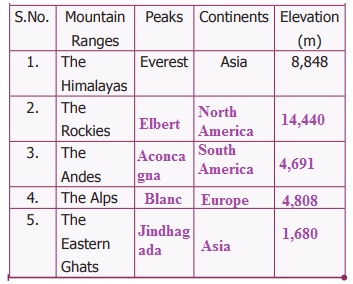 Mountains are the sources of rivers. They provide shelter to flora and fauna. Here, tourism is an important activity. During summer, people go to mountain regions to enjoy the pleasing cool weather. Udhagamandalam, Kodaikanal, Kolli hills, Yercaud and Yelagiri are some of the hill stations found in Tamil Nadu.

Plateaus are the elevated portions of the Earth that have flat surfaces bounded by steep slopes. The elevation of plateaus may be a few hundred metre or several thousand metre. Tibetan Plateau is the highest plateau in the world. So, it is called as the ‘Roof of the world’. The flat topped part of the plateau is called Tableland. The plateaus are generally rich in minerals. The Chotanagpur Plateau is one of the mineral rich plateaus in India. Therefore, mining is one of the major activities of the people living here. The Deccan Plateau in peninsular India is of volcanic origin.

Plains are a flat and relatively low-lying lands. Plains are usually less than 200 metre above sea level. Sometimes they may be rolling or undulating. Most plains are formed by rivers and their tributaries and distributaries. These plains are used extensively for agriculture due to the availability of water and fertile soil. They are most suitable for human inhabitation.

The plains have been the cradle of civilisations from the earliest times. For example: the Indus in India, the Nile valley in Egypt are some of the early civilisations which developed and flourished.

Hence, they are the highly populated regions of the world. The oldest civilisations like the Mesopotamian and the Indus civilisations developed in river plains. The Indo-Gangetic plain in North India is one of the largest plains in the world. The plains formed by river Cauvery and Vaigai are important plains found in Tamil Nadu. Coastal plains are the low lying lands adjacent to oceans and seas. 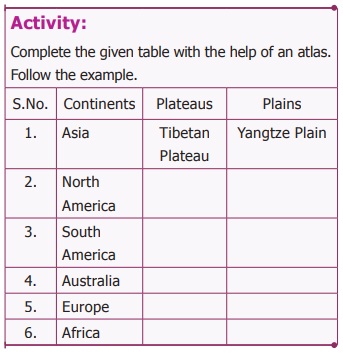 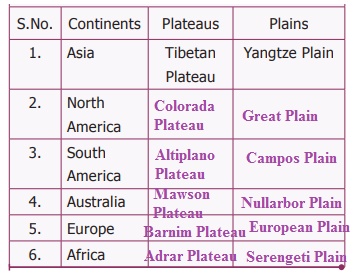 * Make a model of different landforms.

* Prepare an album of people’s activities in different landforms.