* To understand the continents and oceans.

* To learn about the characteristic features of different landforms and oceans.

* To know about the classification of landforms.

* To understand the oceans and its features.

This lesson focuses on land and oceans found on the Earth. It deals with the classification of landforms - first, second and third order landforms. 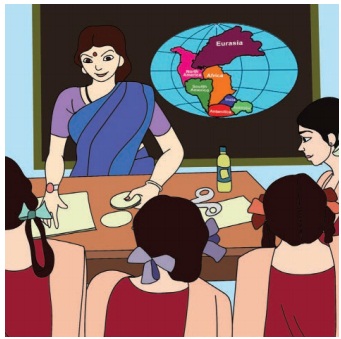 A group pastes the continents and comes first with the chart without any gaps in between the continents. The teacher then puts the chart on the board and the children applaud.

"What kind of picture is this? Once I have seen one like this in the atlas, " says Yazhini.

"You are right. This is Pangea, the Super Continent, and the Sea around is Panthalasa. It was 200 million years ago, when these landmasses moved away from each other to gain the present position as continents and oceans." says the teacher.

"What makes it to move madam?" asks Nila.

"Nothing other than the internal heat of the Earth," says the teacher and continues, “this lesson deals about the continents and oceans in detail”

The Earth is covered by water which occupies 71 percent and land that occupies 29 percent of the Earth’s surface. The surface of the Earth is not even, because it has lofty mountains, deep oceans and other landforms. These landforms can be classified as