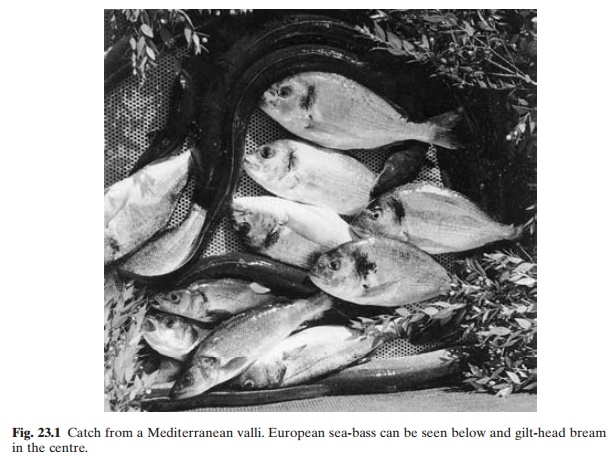 Common to all sea-basses and sea-breams are their euryhaline and carnivorous habits. They fetch high prices in the markets. Landings from capture fisheries are reported to be declining and there is an increasing and unsatisfied market in major consuming areas. Consequently, aquaculture-produced sea-basses and sea-breams have the potential for enhancing both domestic and export trade.

Historically, the European and Asian species of sea-bass and the gilthead sea-bream have been constituents of stocks in the Mediter-ranean vallis (fig. 23.1), Indian bheris and coastal fish farms in Southeast Asian countries. In spite of their predation on other finfish and crustaceans, their market and culinary values made them acceptable species in culture systems. Their stocks in these impoundments were derived from eggs, larvae or fry brought in by the incoming tides. Small-scale efforts in recent years to grow wild and hatchery-reared fry and fingerlings in cages and ponds have shown potential for intensive culture of these species (fig. 23.2). Methods of artificial propagation have been developed and commercial-scale production is becoming established in a number of areas. 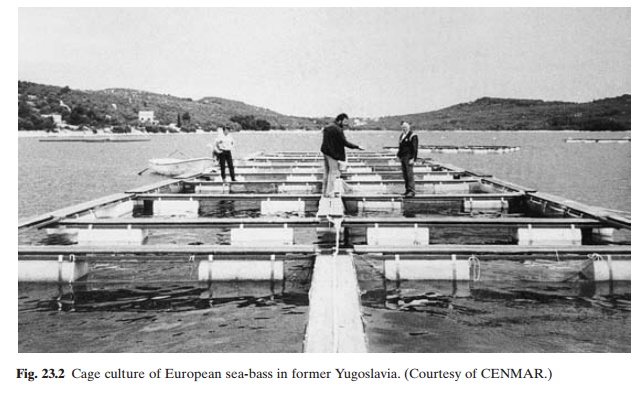