       A voltage sag or voltage dip is a short duration reduction in RMS voltage which can be caused by a short circuit, overload or starting of electric motors.

       Voltage sag happens when the RMS voltage decreases between 10 and 90 percent of nominal voltage for one-half cycle to one minute.

       Some references define the duration of sag for a period of 0.5 cycles to a few

seconds, and longer duration of low voltage would be called “sustained sag".

There are several factors which cause voltage sag to happen:

       When a line-to-ground fault occurs, there will be voltage sag until the protective switch gear operates.

       Some accidents in power lines such as lightning or falling an object can be a cause of line-to-ground fault and voltage sag as a result.

       Depending on the transformer connections, transformers energizing could be another reason for happening voltage sags.

       Voltage sags can arrive from the utility but most are caused by in-building equipment. In residential homes, we usually see voltage sags when the refrigerator, air-conditioner or furnace fan starts up.

ü   Swell - an increase to between 1.1pu and 1.8 pu in rms voltage or current at the power frequency durations from 0.5 to 1 minute

ü   In the case of a voltage swell due to a single line-to-ground (SLG) fault on the system, the result is a temporary voltage rise on the un faulted phases, which last for the duration of the fault. This is shown in the figure below:

ü   Voltage swells can also be caused by the deenergization of a very large load.

ü   It may cause breakdown of components on the power supplies of the equipment, though the effect may be a gradual, accumulative effect. It can cause control problems and hardware failure in the equipment, due to overheating that could eventually result to shutdown. Also, electronics and other sensitive equipment are prone to damage due to voltage swell.

ü   In a balanced sinusoidal supply system the three line-neutral voltages are equal in magnitude and are phase displaced from each other by 120 degrees (Figure 1). Any differences that exist in the three voltage magnitudes and/or a shift in the phase separation from 120 degrees is said to give rise to an unbalanced supply (Figure 2) 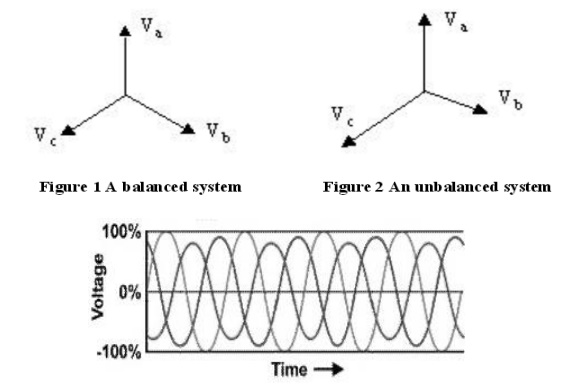 ü   The utility can be the source of unbalanced voltages due to malfunctioning equipment, including blown capacitor fuses, open-delta regulators, and open-delta transformers. Open-delta equipment can be more susceptible to voltage unbalance than closed-delta since they only utilize two phases to perform their transformations.

ü   Voltage fluctuations can be described as repetitive or random variations of the voltage envelope due to sudden changes in the real and reactive power drawn by a load. The characteristics of voltage fluctuations depend on the load type and size and the power system capacity.