One of the most frequently employed displays of data to represent the power quality is the so-called CBEMA curve.

ü   One of the most frequently employed displays of data to represent the power quality is the so-called CBEMA curve.

ü   A portion of the curve adapted from IEEE Standard 4469 that we typically use in our analysis of power quality monitoring results is shown in Fig. 1.5.

ü   This curve was originally developed by CBEMA to describe the tolerance of mainframe computer equipment to the magnitude and duration of voltage variations on the power system.

ü   While many modern computers have greater tolerance than this, the curve has become a standard design target for sensitive equipment to be applied on the power system and a common format for reporting power quality variation data.

ü   The upper curve is actually defined down to 0.001 cycle where it has a value of about 375 percent voltage.

ü   We typically employ the curve only from 0.1 cycles and higher due to limitations in power quality monitoring instruments and differences in opinion over defining the magnitude values in the sub cycle time frame.

ü   Both curves are used as a reference in this book to define the withstand capability of various loads and devices for protection from power quality variations.

ü   For display of large quantities of power quality monitoring data, we frequently add a third axis to the plot to denote the number of events within a certain predefined cell of magnitude and duration. 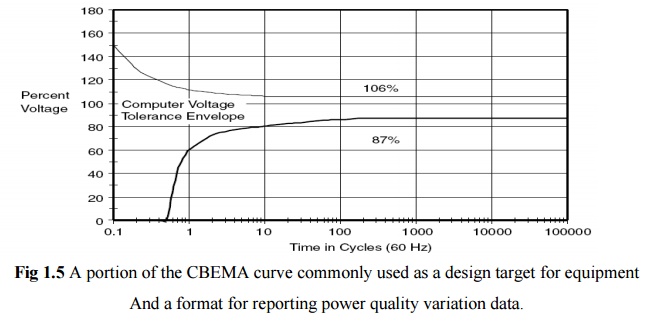 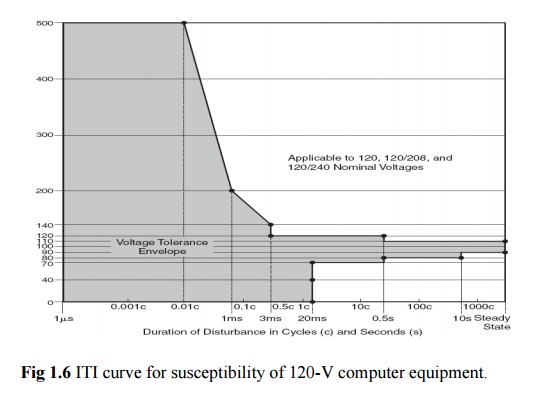